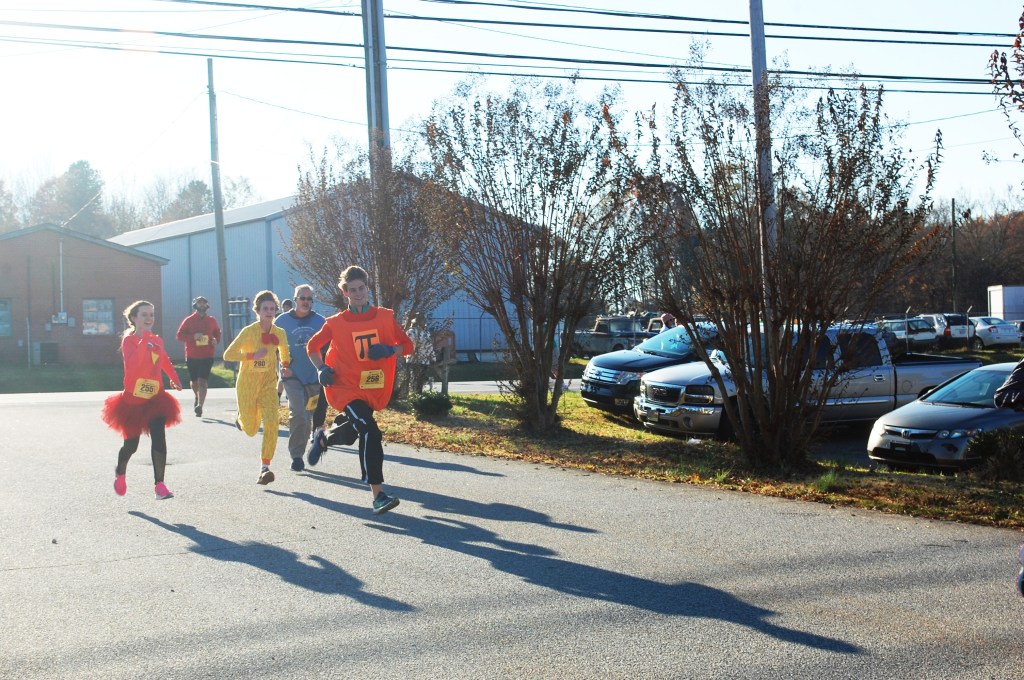 Three runners dressed as 'Pumpkin Pi' and turkeys race toward the finish line in a Thanksgiving Day 5K run sponsored by the Forum fitness center.

1. The exhibit “Locomotion: Railroads and the Making of Atlanta” opened this month at the Atlanta History Center. A featured locomotive is an 1856 steam engine that underwent a 16-month restoration at the N.C. Transportation Museum in Spencer. What is the name of that locomotive?
A. The Carolinian
B. The Georgian
C. The Alabaman
D. The Texas

3. The Forum in Salisbury was home for a Thanksgiving 5K Run/Walk. What is the name for this traditional run?
A. Turkey Trot
B. Giving Gallop
C. Sweet Potato Pie
D. The Butterball

4. The euthanasia rate has dropped more than 70 percent at the Rowan County Animal Shelter, and the shelter is nearing a milestone for itself in which it will have gone how long without euthanizing an adoptable dog or cat?
A. 60 days
B. 90 days
C. 180 days
D. A year

5. The Salisbury City Council approved the demolition of a long-vacant building at 403 N. Main St. so it can be replaced by what?
A. A new Sharonview Federal Credit Union
B. A new Koco Java
C. A new Sheetz
D. An expansion of Wallace & Graham attorneys

6. Black Friday was a big sales promotion day across the country, but Saturday also carried a name and was looked forward to by Rowan County retailers. What’s the name given to the Saturday after Black Friday?
A. Blacker Saturday
B. White Saturday
C. Small Business Saturday
D. Sale-Along Saturday

7. Terry Gladden of Salisbury won a $1 million prize on a N.C. Education Lottery scratch-off ticket. What was the name of the lottery game Gladden played?
A. Platinum Payout
B. Colossal Cash
C. Diamond Dazzler
D. Lucky for Life

8. City of Salisbury tax bills went out this year with the wrong property tax rate. In June, the City Council passed a budget calling for a rate of 71.96 cents per $100 valuation, but some 22,000 property owners received a bill showing 71.69 cents per $100 valuation. How did the City Council decide to correct the clerical error?
A. It rescinded the rate approved in June and went with 71.69 cents per $100.
B. It will add the extra dollars people would have owed to next year’s tax bill, while waiving interest and penalties.
C. It will ask the Rowan County Tax Collector’s Office to send out separate tax statements to collect the roughly $70,000 outstanding.
D. It will go into next year’s budget sessions knowing it must add 0.0027 cents to the tax rate from the beginning.

9. Something was recently unearthed at the former Dunbar Center in East Spencer. What?
A. An array of Native American arrowheads
B. The original sign to Dunbar High School
C. Underground fuel tanks
D. Several graves from a forgotten family cemetery

10. Last Sunday, a Salisbury derailment of three locomotives for Norfolk Southern Railway led to a minor leak of diesel fuel. Where was the derailment?
A. A hundred yards west of the Jake Alexander Boulevard crossing at Woodleaf Lanes
B. Just east of the North Main Street crossing
C. Not far from the Sherwin Williams paint store off West Innes Street
D. South of the former Ice House off West Horah Street