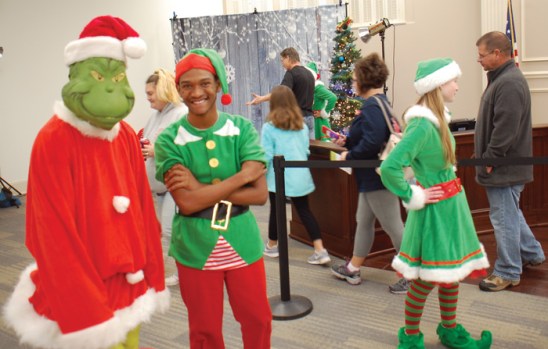 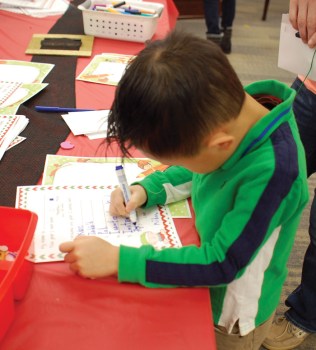 Photo by Mark Wineka/Salisbury Post Aiden Jang, 5, who was visiting from Virginia, fills out his letter to Santa Claus. 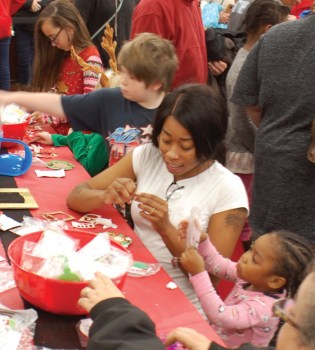 Photo by Mark Wineka/Salisbury Post Carrington Turner and her 2-year-old daughter, Carsyn, make a Christmas ornament at one of the craft tables set up in Council Chambers at City Hall. 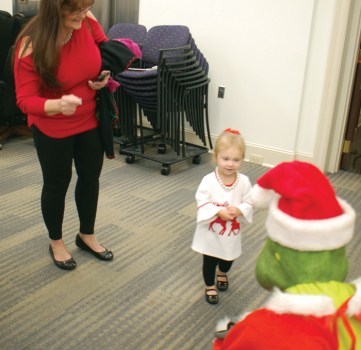 Photo by Mark Wineka/Salisbury Post With a little trepidation, 2-year-old Layla Faletti moves toward the Grinch Saturday morning as her grandmother, Robin Thomas, gives her encouragement. 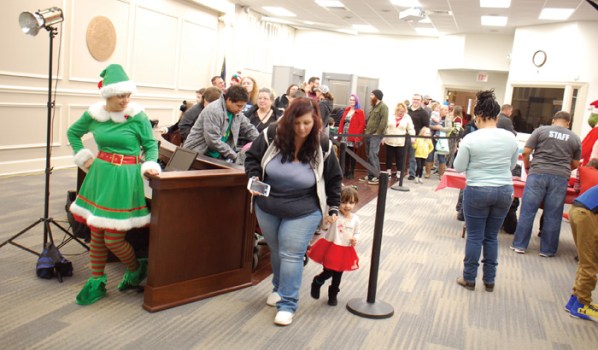 Photo by Mark Wineka/Salisbury Post With a long line of people behind them, Tiffany Blackwell leads her daughter, Isabella, 2, to the area where Santa waits for them during Saturday's busy Santa & Grinch event at Salisbury City Hall. 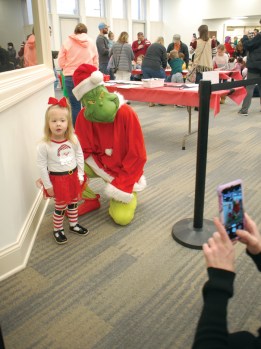 Photo by Mark Wineka/Salisbury Post River Dyer, 2, poses with the Grinch while her mother, Leslie, snaps their picture. 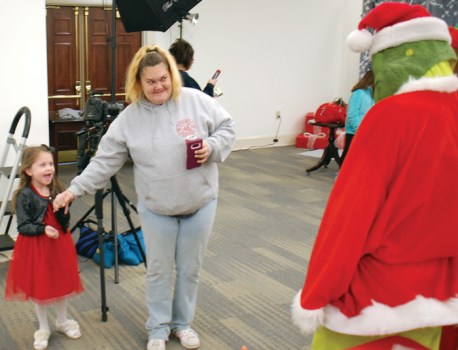 Photo by Mark Wineka/Salisbury Post McKinze Sowell, 4, of Gold Hill, can't hide her excitement as her mother, Amber Lovett, introduces her to the Grinch during Saturday's event at Salisbury City Hall. 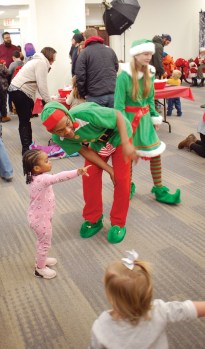 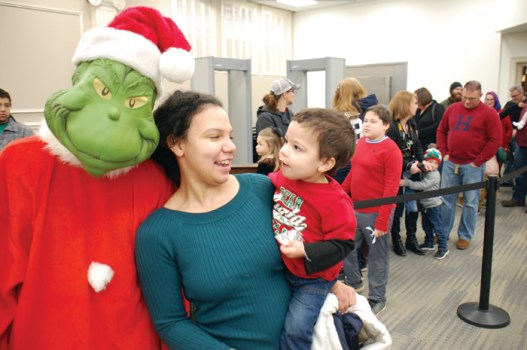 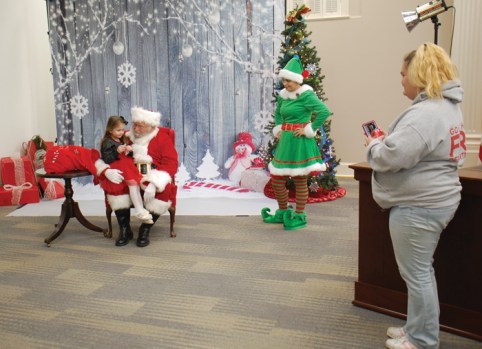 But Saturday, the chambers were home for political accord — an unusual blending of red, white and green.

Downtown Salisbury Inc. and the Parks and Recreation Department brought together two of Christmas’ more noted celebrities Saturday at City Hall — the big man himself, Santa Claus, and the holiday’s most famous bandit, the Grinch.

Parents and grandparents call this a win-win situation.

How often do you get a chance to take your kids to see both Santa and the Grinch at the same place? Several hundred people showed up for that opportunity Saturday.

Kerrigan Sides, 6, of Salisbury, said it was “pretty awesome.”

“I love it,” said Carrington Turner, who brought her 2-year-old daughter, Carsyn. “It’s real family-oriented and that’s what we like to be around.”

While the Grinch roamed through the crowd and greeted everybody, folks also waited in line so children could meet with Santa and have their photograph taken with him.

Those professionally taken pictures will be uploaded to the Downtown Salisbury Inc. Facebook page by this coming Friday and can be accessed for free.

The whole day was free, in fact. Children also had the opportunity to make their own Christmas ornaments, color some holiday pictures and write letters to Santa. They were then encouraged to take their letters to Santa’s mailbox on the Square.

If the letters have a return address, the children will be receiving an answer back from Santa.

City Hall became the fall-back location Saturday because of the rainy, cold weather. The event usually is held outdoors at the Bell Tower.

“We’ve had a lot of people thank us for having this,” said Larissa Harper, executive director of Downtown Salisbury Inc. “… This is a great experience for the public, because a lot of people don’t know where City Hall is.”

In the spring, a Downtown Salisbury Inc. event with the Easter Bunny had to be moved here, also because of the weather, so organizers knew this would be a warm, dry, fun and accommodating spot.

And there’s plenty of parking close by.

“It is a great place to have it,” Harper said.

People were lining up outside of City Hall an hour before the doors opened Saturday morning. “There’s a lot of excitement around this event,” Harper added.

Robin Thomas brought her 2-year-old granddaughter, Layla Faletti, to the event. Layla was wearing her new Christmas outfit, which featured reindeer on the front. She also was sporting a big pearl necklace.

While waiting in line, the Grinch came by to meet Layla, who wasn’t quite sure if she should approach the green character.

Other children warmed up to the Grinch more readily. McKinze Sowell, 4, ran up to him and immediately gave him a high-five. Her mom, Amber Lovett, said her daughter knows all about the Grinch and saw the new movie about him the day before.

McKinze already had met with Santa and told him she would be looking for a real bunny and a giant Barbie house for Christmas.

Jayden Keener, who will be 2 in January, had been to see Santa and the Grinch last year.

“This is his second time,” his mom, Sherika White, said. “I plan to do this every year — yeah, he’s a veteran.”

Broome said she looks forward to seeing her boys’ picture with Santa every year.

“If they’re good enough,” she said, “they make the Christmas card.”

The city has several more holiday events to look forward to in coming weeks:

• The Parks and Recreation Department’s “Brunch with Santa” will be held from 10 a.m.-noon Saturday (Dec. 1) at the Salisbury Civic Center, 315 S. Martin Luther King Jr. Ave. Cost is $5.

• The Parks and Recreation Department will be host for New Year’s Eve at Bell Tower Park from 9 p.m.-midnight Dec. 31.