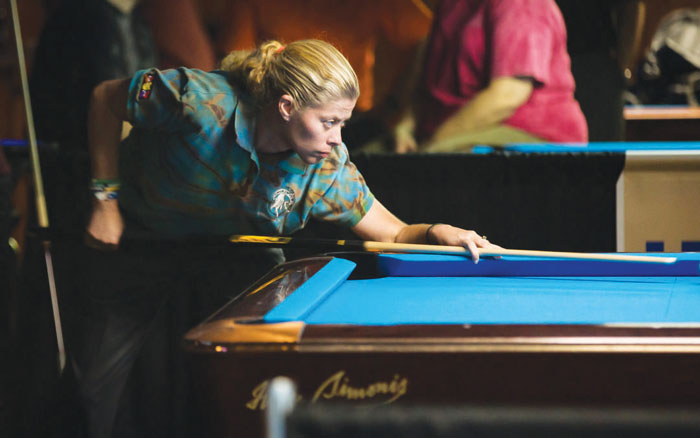 Cossette took the 41-player field by storm, knocking off defending champion Melina Huang, of Los Angeles, 9-8, in the championship match.

Huang finished as the runner-up and Tina Hess, of Huntsville, Ala., took third place.

“This is an absolute dream come true,” Cossette said, on a Facebook post. “The people that are close to me know how much dedication and drive I had to accomplish this. I guess the seventh time was the charm and it shows that if you really want something, never give up!”

Cossette went on to thank “everyone that helped grow my game to get me to this point.”

Cossette was one of only 41 players from a field of nearly 500 who qualified for the championship rounds from one of 33 preliminary rounds held across the country. The double elimination tournament offered the top amateur players the opportunity to showcase their skills through a combination of 8-ball and 9-ball.

In addition to achieving the highest honor in amateur pool, Cossette received a magnificent marble and bronze trophy and entry into a 2019 professional tournament. She also receives an automatic bid to return and defend her title next year.

The APA, based in Lake Saint Louis, Mo., sanctions the world’s largest amateur pool league, with leagues throughout the United States, Canada and Japan.  Nearly 250,000 members compete in weekly 8-ball and 9-ball league play.  The APA is generally recognized as the Governing Body of Amateur Pool, having established the official rules, championships, formats and handicap systems for the sport of amateur billiards.

The APA and its championships are sponsored by Aramith, Action Cues, PoolDawg.com and Valley-Dynamo.

For more information on the U.S. Amateur Championship, visit https://poolplayers.com/us-amateur-championship/