The organization discussed the Tree of Hope project, the Auxiliary’s major fundraiser. All donations will be directed to the Wallace Cancer Center scheduled to open in 2020. The Tree of Hope provides an opportunity for contributors to honor or memorialize a loved one by donating $10 per light during the holiday season.

The Lighting Ceremony will be held on Thursday, December 6 at 5:00 pm at the Wellness Park on the corner of Confederate Avenue and Henderson Street.

If interested in contributing a light to the tree, donation forms can be obtained from the NHRMC Gift Shop or from members of the auxiliary. 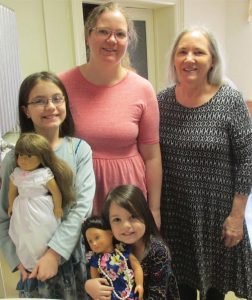 Successful Fiesta with ‘Josefina’
By Beth Nance
SPENCER — Red, white and green decoration transformed the fellowship hall of Central United Methodist Church into a lively Mexican fiesta. On Nov. 10 the Rowan Doll Society hosted an American Girl party featuring a program on the character doll “Josefina.”
The afternoon started with a short Spanish lesson. Retired school teacher Kathy Gregg, the program presenter, familiarized the girls with some of the key Spanish words featured in the American Girl Josefina’s book series, using flash cards with words like Nina (girl), Tia (aunt), Muñeca (doll) and Fiesta (party). The girls used these words for several games of BINGO.
Coloring and crafts were the next activities; table tops were lined with newspapers that Kathy brought back from Mexico. Each girl made a medicine pouch out of red felt, similar to the one Josefina uses in the book series.
Kathy, a Rowan Doll Society club member, presented a short video on the life and times of Josefina. Kathy returned to Rowan County after spending four years living in Mexico with her husband.
Cathy Wood, also a Rowan Doll Society club member, presented a display which included a variety of American Girl Dolls.An avid collector, she shared her secrets on restoring American Girl dolls that she’s rescued from area thrift stores.
Two sisters attending the event, Rowan and Wrenn Honeycutt, had the lucky numbers and were the winners of the two American Girl dolls given away.
Makayla Cauble attending with her grandmother, Debra Cook, told Kathy this was the “best event she’d ever been to.” She was a-lucky winner too, and in addition to a new doll, she took home a treasure box.
This Fiesta concluded with snacks of caramel apple and Mexican hot chocolate. The girls also enjoyed a scavenger hunt at the Doll, Toy and Miniature Museum.
Anyone interested in attending future American Girl events should like the Museum’s FB page at facebook.com/NCTOYMUSEUM.
The event was hosted in conjunction by the Rowan Doll Society of NC and the NC Museum of Dolls, Toys & Miniatures. 108 Fourth St.

Silverling tree: is it invasive?