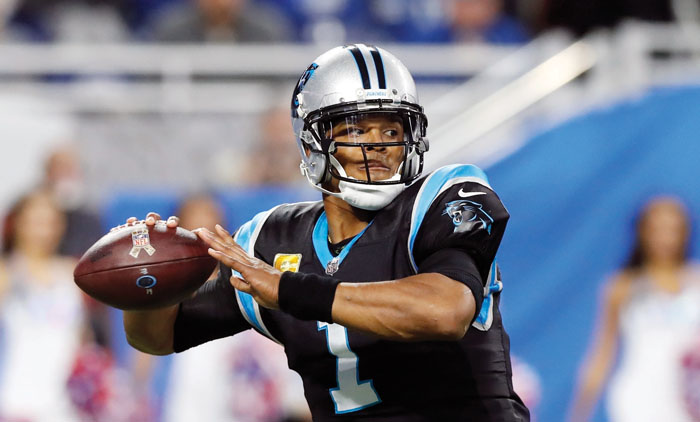 FILE - In this Nov. 18, 2018 file photo, Carolina Panthers quarterback Cam Newton throws during the first half of an NFL football game against the Detroit Lions, in Detroit. Newton is 2-5 all-time against the Seahawks. He’ll face the Seahawks on Sunday, Nov. 25. (AP Photo/Carlos Osorio, File)

CHARLOTTE (AP) — The good news for the Carolina Panthers is they return home Sunday to face the Seattle Seahawks where they’ve won 10 straight games.

The bad news is it’s highly unlikely the Panthers will play a playoff game in Charlotte, North Carolina, if they reach the postseason.

They and the Panthers (6-4) essentially find themselves competing for wild-card spots in the NFC with six games remaining given their chances of winning a division title and hosting a postseason game appear remote. Carolina has lost two straight on the road and fallen 3 ½ games behind New Orleans in the NFC South, while the Seahawks trail the Los Angeles Rams by 4 ½ games in the NFC West.

“Right now, we can’t worry about what New Orleans is doing. We can’t worry about the playoff picture. We just have to win a game,” Panthers tight end Greg Olsen said. “In this league, it’s so easy to get caught up in, ‘If this team wins, if this team loses, (then) we can have home-field (advantage). … Hey, if we don’t win some games, we’re not going to be in the playoffs.”

In terms of wild-card implications, this game looms as large as any in the NFC.

Currently, the Panthers would be one wild-card team, while the Minnesota Vikings would be the other. But that could all change if the Seahawks continue their recent dominance over the Panthers.

Russell Wilson is 5-2 against Cam Newton and Carolina.

He has averaged 270.3 yards passing per game with 11 touchdown passes and six interceptions. Newton, on the other hand, has struggled mightily against the Seahawks with nine turnovers and only five TD passes.

Seahawks coach Pete Carroll wasn’t giving any hints as to how his team intends to slow one of the game’s most dangerous QBs.

“If I tell you, then that would help them, huh?” Carroll said.

D.J. Moore has been looking increasingly more like Carolina’s top receiver — and this week he may need to take on the role of No. 1 receiver with Devin Funchess listed as doubtful with a back injury that has kept him out of practice this week.

Moore, the team’s first-round draft pick, caught seven passes for 157 yards and a touchdown in Carolina’s 20-19 loss to the Lions last week, including an 82-yard catch and run. Meanwhile, Funchess had a miserable game with five drops, including one in the end zone.

If Funchess is out, the Seahawks can expect to see more of second-year wide receiver Curtis Samuel, who has been explosive in his limited playing time.

Panthers kicker Graham Gano missed an extra point and a field goal in Carolina’s 20-19 loss to the Lions last week. So when coach Ron Rivera opted to go for 2 in the game’s final seconds instead of tying the game, it appeared to show a lack of confidence in his veteran kicker.

However, Gano returns home this week where he has made 39 straight field goals.