No. 2 Clemson goes to 12-0 with win over Gamecocks 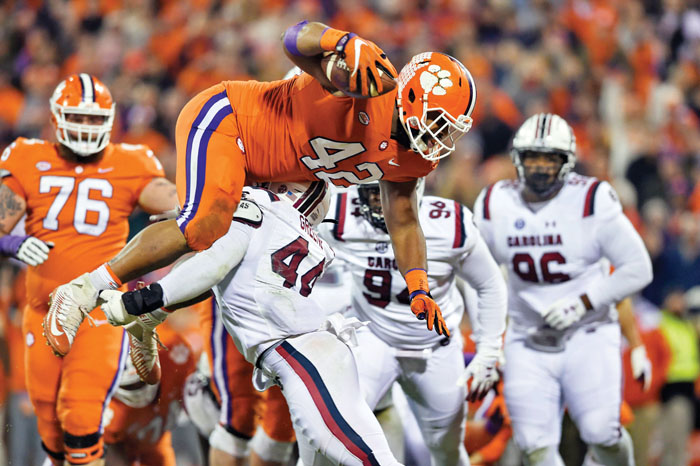 AP Photo/Richard Shiro ... Clemson’s Christian Wilkins, a defensive lineman, went into the game on offense and dives over South Carolina’s Sherrod Greene to score a touchdown during the first half of Saturday night’s college football game in Clemson, S.C. The No. 2-ranked Tigers won the game, 56-35.

CLEMSON, S.C. (AP) — Trevor Lawrence threw for a career-high 393 yards, Adam Choice rushed for three touchdowns and No. 2 Clemson capped a perfect regular season with a 56-35 victory over South Carolina on Saturday night for its fifth consecutive rivalry win.

The Tigers reached 12-0 for the second time in four seasons and for the third time in program history, starting with its 1981 national title season.

Clemson (CFP No. 2) kept pace for another title run with their latest success over the Gamecocks (6-5), its longest since winning seven in a row from 1934-40.

Jake Bentley had career highs with 510 yards — the second most ever allowed by Clemson — and five TDs for South Carolina. The Tigers had not given up that many points in 28 games since a 42-35 win over Virginia Tech in the 2016 Atlantic Coast Conference title game.

The Tigers will try for their fourth straight ACC title when they take on No. 24 Pitt in the championship game at Charlotte, North Carolina.

Not that South Carolina didn’t throw a scare into the Tigers — or give defensive coordinator Brent Venables something to yell about leading into the ACC title game.

South Carolina, which had lost the last two rivalry games by a combined 90-17 score, was supposed to have little chance to hang with Clemson.

But it was the Gamecocks who struck first and kept on going. Bentley threw for 302 yards and three TDs in the opening half, including scoring throws of 67 yards to Kiel Pollard and 75 yards to Deebo Samuel to stick within 28-21 at the break.

Clemson’s offense was relentless early on with four touchdowns on its first four possessions, two rushing scores by Choice and another on a 1-yard leap into the end zone by 315-pound Christian Wilkins.

Wilkins came up flexing in celebration, then struck the Heisman pose — which drew a 15-yard unsportsmanlike conduct penalty and ire of coach Dabo Swinney who got in Wilkins face for a minute or two on the sidelines.

It was far from the only bit of bravado by the Tigers. After Lawrence’s 22-yard TD pass to Tee Higgins to put Clemson ahead for the first time 14-7, the freshman quarterback stared down the South Carolina sideline. But that’s common in a heated rivalry where some in the home crowd booed the Gamecocks’ band at halftime.

Choice had scoring runs of 1, 2 and 13 yards. His last one gave Clemson 41 rushing TDs this season to set the program single-year mark.

Travis Etienne ran for 150 yards and two touchdowns (the last with 39 seconds left) to give him 19 to set that single-season record.

Samuel had 10 catches for 210 yards and three touchdowns while Gamecocks receiver Shi Smith had nine grabs for 109 yards and a score.

TUSCALOOSA, Ala. (AP) — Tua Tagovailoa threw five touchdown passes and ran for a score to lead Alabama past rival Auburn.

Tagovailoa and the Crimson Tide (12-0, 8-0 Southeastern Conference, No. 1 CFP) took over with an explosive third quarter, when the Heisman Trophy contender threw three long touchdown passes. He’s the first Alabama player to have a hand in six TDs in a game and matched the school record with the five scoring passes.

Now, ‘Bama heads to the SEC championship game against No. 5 Georgia with a guaranteed playoff spot on the line.

With Alabama leading Auburn (7-5, 3-5) 17-14 at halftime, Tagovailoa launched the Tide into another SEC blowout. He was 11-of-12 passing for 208 yards and four touchdowns in the second half, despite only playing one series in the fourth quarter.

Tagovailoa finished 25 of 32 for 324 yards and ran for 26 yards, including a 7-yard touchdown and a 21-yard third-down conversion on runs.

The second-half numbers included touchdowns of 46 yards to Jerry Jeudy, 33 to Josh Jacobs, 40 to DeVonta Smith and 22 to Henry Ruggs III — all accurate strikes downfield.

LOS ANGELES (AP) — Ian Book passed for 352 yards, Dexter Williams went 52 yards on a go-ahead touchdown run and No. 3 Notre Dame completed an unbeaten regular season and likely secured a spot in the College Football Playoff with a 24-17 over longtime rival Southern California on Saturday night.

Chris Finke caught an early TD pass for the Fighting Irish (12-0, No. 3 CFP), who showed playoff-level tenacity in rallying from an early 10-point deficit, their largest of the season. Tony Jones Jr. then took a short pass 51 yards for a touchdown with 3:09 to play to finish off Notre Dame’s 10th perfect regular season since 1945, the first since 2012.

Notre Dame is all but certain to be chosen for the four-team playoff, and this win could keep the Irish away from powerhouse Alabama in the first postseason game.

Williams rushed for 97 yards as the Irish overcame a slow start in the 90th edition in this famed intersectional rivalry. Notre Dame didn’t score until Finke’s TD catch shortly before halftime, but the Irish ran off 24 consecutive points and shut out USC in the second half until Tyler Vaughns’ TD catch with 48 seconds to play.

J.T. Daniels passed for 349 yards for the Trojans (5-7), who will stay home for the bowl season after their first losing season since 2000. Vaughns caught 12 passes for 120 yards in what might have been the final game for coach Clay Helton, who is under pressure after the Trojans lost five of their final six games in a dismaying collapse.

Justin Yoon set a Notre Dame record with his 58th career field goal late in the third, putting the Irish up 17-10.

The Bulldogs (11-1, No. 5 CFP) couldn’t afford a slip-up, not with top-ranked Alabama looming next week in Atlanta.

Georgia led 38-7 at halftime — which, in an interesting twist, was the score of last year’s dominating victory over the Yellow Jackets. The Bulldogs held a 343-66 edge in total yards, piling up 18 first downs to only four by Georgia Tech (7-5).

Fromm threw a 5-yard touchdown pass to Riley Ridley, a 12-yarder to Jeremiah Holloman and a 44-yarder to Mercole Hardman. Swift chipped in with a 1-yard scoring run, Elijah Holyfield had an 8-yard TD and Rodrigo Blankenship completed the onslaught with a 25-yard field goal on the final play of the half. On Georgia’s first series of the second half, Fromm hooked up with Ridley again on a 4-yard scoring pass that prompted many in the crowd of more than 92,000 to head for the exits on a cold, damp day between the hedges.

The Gators (9-3) halted Florida State’s bowl streak, which began in 1982, and handed the Seminoles (5-7) their first losing season since 1976 — Bobby Bowden’s first season as coach.

Franks, who grew up just 20 miles south of Doak Campbell Stadium in Crawfordville, completed 16 of 26 passes for 254 yards. He threw touchdown passes to Van Jefferson, Trevon Grimes and Josh Hammond. Grimes led the Gators with five receptions for 118 yards.

McSorley added 64 rushing yards on 11 carries for the Nittany Lions (9-3, 6-3 Big Ten, No. 12 CFP). He threw a 34-yard bullet through freezing rain to KJ Hamler on the game’s first play, sprinted downfield to throw a block that opened Miles Sanders up for a 35-yard run on the next, then skipped into the end zone from 3 yards out to cap the quick opening drive.

McSorley added another touchdown run two possessions later when he scrambled through a pair of defenders up the middle for 20 yards and a 14-3 lead.

The Wildcats (9-3) scored TDs on all five first-half drives and never trailed in posting their first nine-win regular season since 1977, scoring TDs on all five first-half drives. Wilson’s 3-yard scoring run provided a 14-0 lead before he tossed TD passes of 28 and 13 yards to Lynn Bowden for a 35-10 cushion late in the second quarter. The sophomore transfer threw a 32-yard TD to Josh Ali in the third to make it 42-10.

The Orange (9-3, 6-2 Atlantic Coast Conference) gave up the first score of the game, then scored touchdowns on three straight possessions, starting with a 75-yard pass from Dungey to a wide-open Sean Riley. BC fumbled the ensuing kickoff, setting up Dungey’s 4-yard run to make it 14-7 and the Eagles (7-5, 4-4) never got any closer.

Dungey followed with a 2-yard touchdown run and also scored on an 18-yard quarterback sneak right before the half to give the Orange a 28-14 lead.

Thorson completed 12 of 18 passes for 110 yards and two TDs. He also ran for a score, and Bowser posted his fourth 100-yard game of the season.

MIAMI GARDENS, Fla. (AP) — Travis Homer rushed for 168 yards and a long touchdown, DeeJay Dallas ran back a punt for one of his two scores and Miami closed its regular season by knocking off Pittsburgh.

Dallas also had a rushing touchdown for the Hurricanes (7-5, 4-4 Atlantic Coast Conference).

WOFFORD GETS TO 2ND ROUND OF PLAYOFFS FOR 3RD STRAIGHT YEAR

SPARTANBURG, S.C. (AP) — Freshman Nathan Walker rushed for 90 yards and a touchdown, helping Wofford beat Elon 19-7 on Saturday to advance to the second round of the FCS playoffs for the third season in a row.

Wofford rushed it 59 times for 344 yards — with a long of 56 — and a score. The Terriers forced turnovers on Elon’s first two drives of the second half on Mason Alstatt’s interception and Jireh Wilson’s fumble recovery.

Luke Carter scored the first points of the FCS playoffs with a 32-yard field goal in the first quarter to give Wofford the lead.

He made three other field goals, missing one, with a long of 33. Carter capped drives of 13, 11, eight and 14 plays, with a field goal in each quarter.

Brelynd Cyphers had a 1-yard touchdown run early in the second quarter and Elon led 7-6 at halftime. Daniel Thompson was 20-of-32 passing for 209 yards.