Buckeyes hang 62 points on No. 4 Michigan 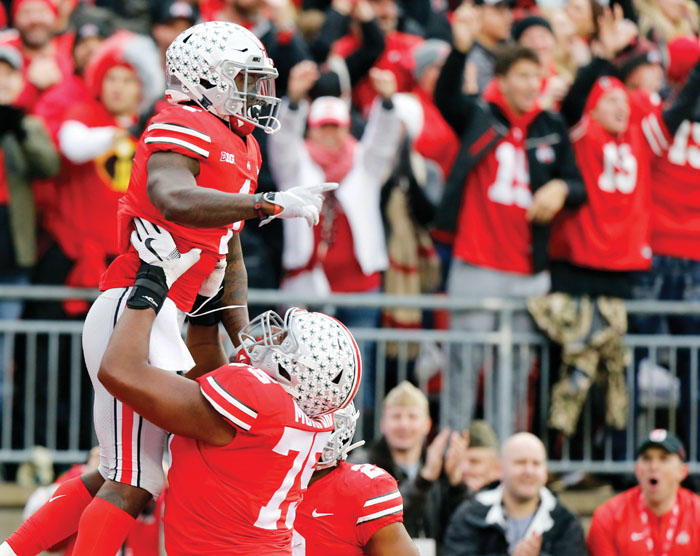 COLUMBUS, Ohio (AP) — This season for Ohio State has been anything but normal, beginning with its celebrated coach suspended for three games.

There have been spotty performances and troubling trends on both sides of the ball. There has been constant speculation and questions about Urban Meyer’s health and future.

After all that, it was business as usual against Michigan, and now the Buckeyes are right where they always expect to be.

Dwayne Haskins threw five touchdown passes , freshman Chris Olave had a breakout performance and No. 10 Ohio State continued its mastery over No. 4 Michigan with a record-setting 62-39 victory Saturday that sends the Buckeyes to the Big Ten championship game.

The Wolverines were two victories away from their first conference championship since 2004 and a trip to the College Football Playoff, facing an underdog Ohio State team that has looked discombobulated on defense and one-dimensional on offense for much of the season. Looking to snap a six-game losing streak against the Buckeyes (11-1, 8-1, No. 10 CFP) and get coach Jim Harbaugh his first victory in the rivalry known simply as The Game, the Wolverines (10-2, 8-1, No. 4 CFP) wilted.

“Motivated to come back and make darn sure it doesn’t happen again,” Harbaugh said. “Win our next game, that’s our motivation now.”

And now, despite all the dysfunction at Ohio State this season — both on and off the field — the Buckeyes will face No. 20 Northwestern next week in Indianapolis with a chance to repeat as Big Ten champs and maybe even make the playoff.

Maybe most satisfying of all, Ohio State has won 14 of the last 15 meetings against the team it loves to beat the most.

“This is not an ordinary game,” Buckeyes defensive tackle Dre’Mont Jones said. “This is a game that’s got years and miles behind.”

Olave, who came into the game with five catches and no touchdowns, caught two TD passes in the first half and broke it open on special teams in the third quarter. He looped through a seam in the line and got a chunk of Will Hart’s punt. The ball sailed off high and to the side and landed in the arms of Sevyn Banks, who cruised 33 yards for a touchdown that made it 34-19 and sent the Ohio Stadium crowd into a frenzy.

Haskins and the Buckeyes carved up the top-ranked defense in the country for 567 yards. The Buckeyes had the horseshoe rocking when Haskin found Johnnie Dixon wide open for a 31-yard score to go up 21-6 with 3:18 left in the first half.

Haskins finished with 318 yards and set the Big Ten season record for TD passes with 41.

Shea Patterson passed for 187 yards and three touchdowns for Michigan.

Michigan: Harbaugh is now 0-4 against Ohio State and faces another year of critics questioning his ability to win the big game. Harbaugh took ownership of a complete collapse by Michigan, but his players were not letting the coach take all the blame.

“I don’t know why he would take any heat after this loss, he took a lot last year and even this year when we were winning.  We have a chance for an (11-win season),” Patterson said. “I know that’s not our ultimate expectation, but we have a chance to win 11 games and I think that’s a successful season.”

Ohio State: Meyer was suspended after a university investigation into his handling of former assistant coach Zach Smith, who has been accused of domestic violence by his ex-wife. A cloud of uncertainty hung over the Buckeyes throughout preseason practice and it has lingered. Meyer has often looked pained and exhausted on the sideline.

But he flashed a satisfied grin when he met Parris Campbell on the sideline after a 78-yard touchdown run that made it 48-25 early in the fourth quarter.

“Extremely proud of our players, the way they fought through it,” Meyer said. “And like someone was saying, nothing’s ever good enough. And obviously some adversity earlier in the year — not some, big-time adversity. And to come back against your rival and play like that, that’s a focused team that loves each other and cares about each other.”

Michigan: The Wolverines will likely still get into a New Year’s Six bowl, maybe the Peach.

Ohio State: The Buckeyes have won six straight against Northwestern and lost to the Wildcats just once, dating to 1972.