A Virginia tribe reclaims its past 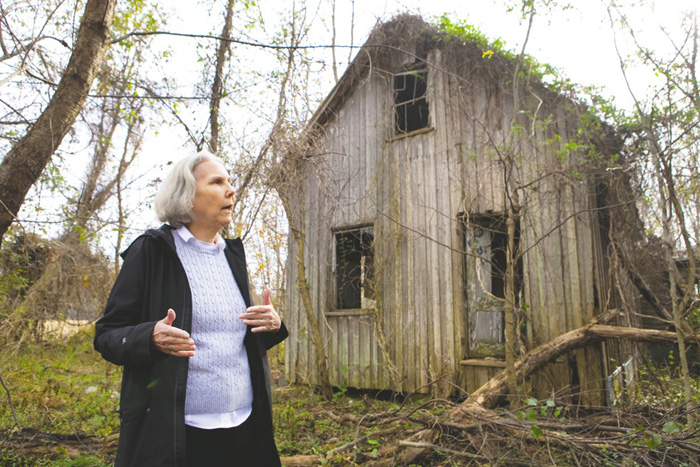 Archaeologist Julia King stands in front of an abandoned house in Virginia that was home to chiefs from the Rappahannock tribe. The house was built in late 1800s; it also doubled as a school and tribal gathering place. Timothy C. Wright/for The Washington Post

INDIAN NECK, Va. — From the road, the abandoned chief’s house is a shadow, almost invisible under a cloak of vines and trees on the edge of a cornfield. If you managed to find it you wouldn’t know what it meant — the ragged wood siding, the gaping windows, the shattered plaster.

The front room was where the tribal council met. The back room was for Indian school, where children learned the old ways. Susie and Otha Nelson lived here beginning in the 1920s, waging a lifelong fight for the survival of their people, the Rappahannock tribe.

Today their granddaughter carries on, and generations of persistence are beginning to pay off. Earlier this year, the Rappahannocks were among a handful of Virginia tribes that finally achieved federal recognition under a bill passed by Congress and signed by the president.

Now, new discoveries are helping the tribe reclaim something that had seemed irretrievably lost: its history.

Recent archaeological work, driven by 2018 data analytics, has unearthed evidence of the Rappahannock tribe’s vast range along the river that bears its name. The findings suggest the Rappahannocks were a powerful tribe with equal standing to other tribes that got more attention from European settlers.

The emerging story undercuts what Western historians have asserted for 400 years about the shape of native culture when the Europeans arrived in America and restores the place of the Rappahannocks, who had nearly been erased from the record.

“There were voices that the Rappahannock needed to have that they weren’t getting,” said archaeologist Julia King of St. Mary’s College in Maryland, who has led the effort.

Popular understanding of Virginia’s native people comes from early English accounts, and Jamestown settlers were all about Powhatan, Pocahontas and the Indians along the James and York rivers.

“Powhatan looms way larger than life in some respects because the English are there and they’re writing about him,” King said. “And this evidence is really suggesting that he probably was just a chief like all of the chiefs were in the area.”

The native people on the Rappahannock lived just beyond the range of the first colonists and kept themselves separate. While the nearby Pamunkey tribe carved out a reservation in the late 1600s, the Rappahannock lost their ancestral land and scattered.

By the early 20th century, their descendants struggled to cling to their identity.

Anne Richardson, 62, the granddaughter of Susie and Otha Nelson, was born in the chief’s house. As a child, she would sit under a table as her father held tribal council meetings.

In 1998, Richardson became the fourth generation of her family to serve as chief — and the first woman to lead a Virginia tribe since the 1600s. Until the new findings, she wasn’t sure that a heritage preserved largely through stories would survive.

“We had had kind of like tunnel vision in looking at things from a Western perspective,” Richardson said. “Lo and behold, everything that had been passed down in actuality was true.”

On a bluff over the brown water of the Rapphannock River, King and her colleague, Scott Strickland, pick their way across a farm field. At their feet, among the remnants of corn stalk, they scan for artifacts. It doesn’t take long to spot them — flakes of quartz broken off by human hands; rocks cracked and split by the heat of a fire.

These grounds about an hour north of Richmond, Virginia, have been in the hands of a single family since long before the country was founded. An 18th-century plantation house presides over a network of fields, barns and rolling gravel roads. But before that, Rappahannock Indians lived here.

For the past three years, King has been using federal grants for work based on a map created by Capt. John Smith about 1608. Smith had explored the Virginia rivers flowing into the Chesapeake Bay and marked Indian towns and settlements along the banks.

On the Rappahannock, all the native villages are clustered on the north shore. The south is empty. Historians have long asserted that’s because the Rappahannocks wanted to keep a safe distance from the great Powhatan to the south.

But the oral traditions of the tribe didn’t line up with that. Family lore said the tribe lived on both sides of the river, depending on the seasons — settling on the north, but moving to the south for hunting. The central town of Tappahannock would switch sides as needed.

And Powhatan wasn’t a feared overlord but more of an equal. He once captured John Smith and brought him to the Rappahannocks to see if this was the man who had killed that tribe’s chief five years earlier. The Rappahannocks said no — Smith was shorter and hairier than the guilty Englishman.

That’s evidence that the two tribes had a rapport, Richardson said.

Working with the tribe and landowners along the river, King and Strickland set out to investigate which view was correct using a powerful new approach. Strickland is an expert with GIS, or geographic information systems, a way of analyzing points of data to understand a landscape.

With a bounty of environmental and historical data and even the locations of amateur archeological finds, Strickland assembled a map that plotted the most likely places for settlement at the time of Jamestown and before.

What he found lined up neatly with Smith’s map. That suggests that it was environmental concerns, not political fear, that put all the villages on the north shore, where the soil was rich, fishing was accessible and fresh water ample.

The south shore, with its different topography, was the hunting ground.

The way King and Strickland see it, the Rappahannock were right and the English historians were wrong. All that emphasis on Powhatan as the only native leader of significance — that’s because he was the most familiar to the settlers, who tended to aggrandize their own experience, King said.

The findings, though untested, have thrilled Virginia historians as a new window into the pre-colonial world. And because the Rappahannock River basin is not heavily developed, the work hints that there’s far more to discover about the tribe’s extensive range.

“Their use of predictive modeling with GIS is really innovative,” said Martin Gallivan, chairman of the anthropology department at the College of William and Mary with expertise in the native cultures of the Chesapeake area. “There really hasn’t been as much attention on the archaeology of native Americans in Tidewater Virginia as there has been attention on the colonial past. It’s really exciting to see somebody like Julie bring all these best practices to bear on the deep past of Native Americans in the area.”

For the tribe, King and Strickland’s work has been profound.

Field surveys at several sites along the river have produced hundreds of artifacts. Some pottery fragments are from thousands of years ago; others could be contemporary with Jamestown. Many bear decorations — delicate patterns made by sticks wound with rope or even by the striated edges of a shark’s tooth.

When Richardson and other tribe members first held them earlier this year, they wept.

“It’s very emotional to hold these things,” Richardson said. “Yet there’s an excitement because we can uncover and preserve these ancient designs we didn’t even know existed, which brings us closer to them and their time period.”

Being able to visit sites where ancestors lived, she said, “it’s like you’ve finally come home. You walk on these lands — I don’t know how to describe it other than it’s a great satisfaction in being able to return there and put feet on the land and hear what it has to say to you.”

Richardson views the progress through the lens of her family’s suffering. Her great-uncle had to reconstitute the tribe after its members scattered during the Civil War. He officially incorporated the Rappahannock tribe in 1921.

Her grandparents faced what was in many ways the worst foe of all — Walter Plecker, who as head of Virginia’s Bureau of Vital Statistics from 1912 until 1946 championed race laws designed to eliminate Native categories.

The Rappahannock fought back every way they could. Otha led the tribe to hire lobbyists to propose laws to the General Assembly. Susie kept her own tribal birth records, then marched to Richmond and insisted that Plecker record them. Still, many Native documents disappeared from state archives.

When the tribe, like others, began to seek state and federal recognition in the 1970s and ’80s, they had to demonstrate “cultural continuity” — but found that difficult because of the systematic destruction of tribal practices and records.

Anne Richardson’s father, Capt. Nelson, won state recognition in 1983 but didn’t live to see the federal government finally acknowledge the tribe early this year. He did see his daughter help the tribe establish a cultural center on more than 100 acres a dozen years ago.

When someone asked him how it felt to walk into the tribal center, “he broke down and cried, which was unusual for him,” Richardson said. “His words were, ‘I thought I would never live to see the day this would be here.'”

Having a central property helped anchor the tribe. Its numbers had steeply declined, Richardson said. Today about 120 members still live in the area near Tappahannock, and another 120 or so are in other parts of the country. But still more have simply fallen off the rolls, and the chief hopes the new efforts will give them a home to which they can return.

King plans to have shovels back out at sites in December.

Just down the road from the cultural center, the tribe has purchased the chief’s house and filed for historic landmark designation. Ultimately, Richardson would like to restore the property, which dates to the late 1800s and is where she lived until she was 11.

She’d like to re-create the farm and start an herbal center — the old house emerging from the vines, the tribe’s history coming back to life.