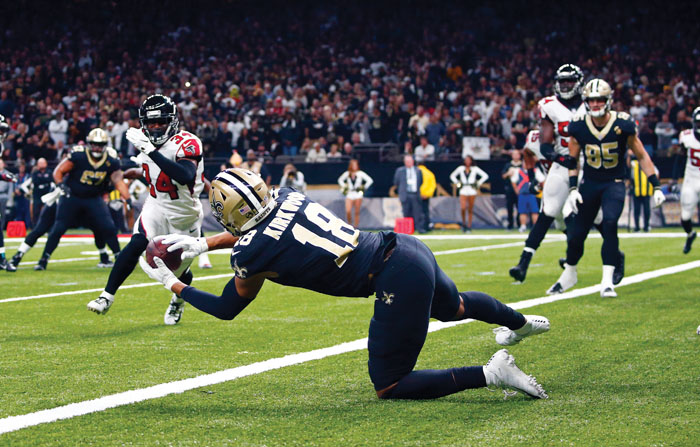 New Orleans Saints wide receiver Keith Kirkwood (18) pulls in a touchdown reception in the second half of an NFL football game against the Atlanta Falcons in New Orleans, Thursday, Nov. 22, 2018. (AP Photo/Butch Dill)

NEW ORLEANS (AP) — Drew Brees threw four touchdown passes to inexperienced receivers and the New Orleans Saints won their 10th straight game Thursday night with a 31-17 victory over Atlanta that eliminated the Falcons from contention in the NFC South.

Tommylee Lewis and Austin Carr each caught their second career touchdown pass, and rookie tight end Dan Arnold grabbed his first, as did rookie receiver Keith Kirkwood. All four entered the NFL as undrafted free agents within the past three years and had combined for zero touchdowns this season before Carr caught the first of his career last Sunday.

Meanwhile, the Falcons (4-7) lost three fumbles inside the Saints 20 — something no team facing streaking New Orleans (10-1) can afford this season.

Atlanta quarterback Matt Ryan was stripped by safety Marcus Williams on a third-and-2 from the Saints 3 and Williams recovered to end Atlanta’s opening drive. Julio Jones was stripped by linebacker Alex Anzalone after a catch on the New Orleans 17, and safety Vonn Bell recovered in the final minute of the second quarter to preserve a 17-3 lead going into halftime.

The Saints’ defense, which had a season-high six sacks, continued to come up with big plays in the second half, with Anzalone breaking up a fourth-down pass in the third quarter and linebacker A.J. Klein intercepting a pass tipped by defensive tackle Tyeler Davison in the fourth.

The interception gave the Saints possession on the Atlanta 22, setting up Kirkwood’s diving 4-yard TD catch.

Just for good measure, Lattimore stripped Calvin Ridley on the Saints 1 after a 29-yard completion that looked as though it would end with a touchdown with about four minutes to go. Defensive back Eli Apple recovered that one.

Ryan was under pressure all night from a Saints defense that was bolstered by the return of first-round draft choice Marcus Davenport from a toe injury that sidelined him for three games. Cameron Jordan had two sacks, while Williams, P.J. Williams, Sheldon Rankins and Demario Davis each had one.

Ryan finished 35 of 47 for 377 yards, two touchdowns and one interception. But very little came easy. His first TD pass, to Calvin Ridley, came on a fourth-and-goal from the 2 at the end of the third quarter.

Statistically, Brees did not have one of his more impressive games, completing 15 of 22 passes for 171 yards with his second interception of the season. The pick was snagged by Damontae Kazee, his NFL-leading sixth this year.

But Brees’ ability to play to the strengths of unheralded receivers allowed the Saints to cash in on scoring opportunities.

Lewis, a third-year pro, was in his first game back after spending nine weeks on injured reserve and had not caught a pass all season before getting wide open for his 28-yard grab that made it 7-0 on the first series of the game. Carr is a second-year pro who played in only one game without a catch as a rookie. Kirkwood made his NFL debut three games ago, when Arnold had his first career reception.

Falcons linebacker Kemal Ishmael was helped off the field in the third quarter after a punt.

Back in Japan, Ohtani says MLB a whole new…