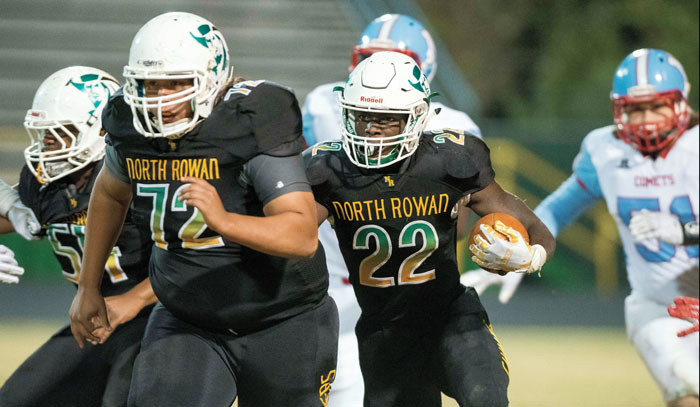 North Rowan’s Malcolm Wilson (22) follows behind the blocking of lineman Justin Hughes (72) as he carries the ball against North Stanly on Oct. 19. Wilson, who leads Rowan County in rushing yardage with 1,723 yards, leads his teammates against Polk County tonight, in the second round of the state 1AA playoffs. JON C. LAKEY FILE PHOTO / SALISBURY POST

SPENCER — It’s been a good season for North Rowan football, but still a season that’s been less than fulfilling.

It’s like the Cavaliers got to eat the turkey, but there was no cranberry sauce, no dressing, no pumpkin pie.

The Cavaliers hope to satisfy their appetite with a 1AA second-round playoff win tonight at home against Polk County. Kickoff is at 7:30 p.m.

North is 9-2, but the Cavaliers are only 1-2 in big games. They beat Salisbury on opening night. Salisbury-North Rowan is always a big deal.

On the second week of the season, North played West Rowan at home in a game that would ultimately decide the county championship. West prevailed, 20-14.

West finished 6-6 and outscored opponents 317-316, but the Falcons can claim the county championship. North, which has utterly pummeled opponents, 376-84, cannot.

“The West game was in our grasp, but we let it slip through our fingers,” North head coach Ben Hampton said.

North plays in the 1A Yadkin Valley Conference and demolished the third-best team in that league — South Stanly — 42-0, on the road.

The only truly serious game the Cavaliers have been  involved in since August was at home against North Stanly on Oct. 19. That game was much hyped, with good reason, as both squads were ranked in the top 10 in 1A and they knew they were playing for the YVC title. But the Cavaliers laid an egg. They turned it over three times in the opening minutes. North Stanly buried them, 43-8.

“North Stanly has a really outstanding football team,” Hampton said. “At the same time, we couldn’t have played any worse than we did. Our guys have responded well since that loss.”

Since that loss, North Rowan has steamrolled three overmatched opponents by a combined 154-7. That may or may not mean anything. One of the three was West Montgomery, but West Montgomery, a frequent nemesis for the Cavaliers over the years, is down a lot from where it was a year ago.

Which brings us to tonight’s matchup.

The 11th-seeded Polk County Wolverines are only 4-8, even after winning a playoff game at East Wilkes last week while third-seeded North Rowan was enjoying a bye, but this should be a serious game.

Polk County has a winning program and is in the playoffs for the 19th straight season. Coach Bruce Ollis is well-respected and his team has played its best football the last two weeks. East Wilkes had won seven games, but Polk County handled the Cardinals.

Polk County, which still has veteran quarterback Avery Edwards, will be as confident as any 4-8 team can be traveling to play a 9-2 team because Polk County, playing at home, beat North Rowan, 30-22, in the first round last season.

North had leads in that game of 13-0 and 19-3, but Sutton’s kickoff return TD shortly before halftime turned the game around.

North is quite talented for a 1A squad.  North’s defense is quick and physical and has shut out six teams. It’s true that some of those six weren’t stellar.

Offensively, North prefers to run the ball with Malcolm Wilson (1.723 rushing yards, 25 TDs), but the Cavaliers also put it in the air pretty well. QB Willis Mitchell is experienced and hard-nosed, and he’s thrown 16 TD passes to a receiving corps led by Quintous Smith Jr. and Denerio Robinson. Some teams run to open up the passing game. North throws to open up the run.

“They’re a pretty typical mountain team in that they are physical,” Hampton said. “But we believe we can match their physicality. If we can do that, then we should have the advantage as far as team speed.”

Carson may be the most comparable local team to Polk County, as far as what the run-heavy Wolverines like to do. North’s plan against Carson is always to stop the run and make the Cougars throw. That’s probably going to be how the Cavaliers approach the Polk County matchup.

North’s 4-2-5 defense is constructed to deal with passing teams, but against a running team like Polk, hard-hitting rover Tyzai Lyles can become a third linebacker.

Hampton said the opening minutes will be critical. North wants to score on its first offensive possession and wants a three-and-out on its first defensive series. It wants to set the tone right away.

North’s 9-2 record is nothing to sneeze at. In the history of North football, only eight squads have won 10 or more games. The Cavaliers will have a chance to join that short list of double-digit win teams tonight.

North is the only Rowan team still in the playoffs.

Rowan was 0-3 in the playoffs last season and is 0-3 this year. Salisbury was smashed at Ashe County. West Rowan was shut out at Kings Mountain. East Rowan, minus its quarterback and running back, made a pretty amazing effort but lost at Statesville, 7-6.

Eight years ago, Rowan County teams won two state titles, with Salisbury rolling in 2AA, and West Rowan taking the final leg of a 3-peat in 3A.

In 2011, West was a state runner-up. In 2012, Salisbury reached the state semifinals before losing a back-and-forth game at home to South Iredell.

In the last six seasons, Rowan teams haven’t fared all that well.

• Carson’s last playoff win was in 2010. The Cougars have lost their last five playoff games.

• Salisbury’s last playoff win was in 2014. The Hornets have lost their last three playoff games.

The Cavaliers were winless on the field in 2008, but they’re in the playoffs for the 10th year in a row.

North received a favorable seed and friendly bracket. The winner of the North-Polk game takes on the winner of the Starmount-Community School of Davidson contest in the third round. Starmount is the No. 2 seed in the 1AA West bracket despite an unimposing 5-6 record.

NOTES: Gates will open tonight at 6 p.m. Admission is $8. Only approved NCHSAA passes can be accepted.  … In the 1AA East, North Stanly got a dreadful draw and is on the road tonight at Granville Central as a No. 5 seed. If the Comets handle No. 4 Granville Central, a trip to Tarboro looms. Tarboro, which blasted Mount Airy in the 2017 1AA title game, is unlikely to have any trouble tonight with South Stanly.  … There are some interesting 3A matchups in the area, with unbeaten Northwest Cabarrus hosting Tuscola and Statesville hosting Kings Mountain.

High school football: Caldwell getting it done both ways…