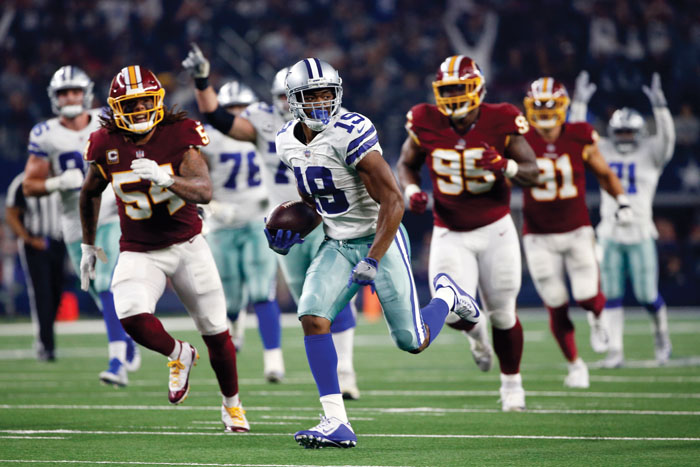 Dallas Cowboys wide receiver Amari Cooper (19) runs in for a touchdown against the Washington Redskins during the second half of an NFL football game in Arlington, Texas, Thursday, Nov. 22, 2018. (AP Photo/Ron Jenkins)

ARLINGTON, Texas (AP) — Ezekiel Elliott made the $21 donation after his touchdown. Amari Cooper took the freebie following the first of his two scores.

The bonus for the Dallas Cowboys: They’re all the way back in the NFC East race.

Cooper celebrated his first touchdown with a mock free throw before a 90-yard score that sent him to a Dallas Thanksgiving- record 180 yards receiving, and the Cowboys pulled even with Washington atop the division with a 31-23 win over the Redskins on Thursday.

Elliott ran for 121 yards with his TD and cash celebration as the Cowboys (6-5) won their third straight game since their first home loss, to Tennessee in the Dallas debut of Cooper. Dallas’ eighth win in nine Thanksgiving games against Washington, and second in three years, earned a season split.

“Everyone jumped off the bandwagon, of course, at 3-5,” quarterback Dak Prescott said. “You expect that. I can tell you who didn’t doubt ourselves. As long as we locked arms, we stayed tight, we knew we could do this and we can do more. That’s the only thing that matters to us.”

The former Texas Longhorns star threw three interceptions to offset two touchdown passes. McCoy won his two previous starts at the home of the Cowboys, one for the 2009 Big 12 championship and the other his most recent NFL victory with the Redskins in 2014.

“I think I’m encouraged, on a short week like that,” said McCoy, who was 24 of 38 for 268 yards. “Losing overshadows everything. But I’ll go back and watch it and try to clean up some of my mistakes that are going to help our team win.”

Cooper had 105 yards after the catch on his two touchdowns.

First, Cooper ran away from Quinton Dunbar after the Washington cornerback slipped on a short pass, turning it into a 40-yard TD for a 17-13 lead. Cooper celebrated by mimicking a free throw , shooting the football through the goal post.

On the 90-yarder, Cooper made the catch just outside the Dallas 30, spun out of the arms of Fabian Moreau and won the race to the pylon against former Alabama teammate Ha Ha Clinton-Dix, who tried to shove him out of bounds around the 5.

The longest catch of Cooper’s career and longest completion in Prescott’s three seasons came exactly a month after the Cowboys gave Oakland their first-round pick in the upcoming draft for a new No. 1 receiver.

“I’ve been putting in extra time with my coaches, with Dak,” Cooper said. “For some reason, since I’ve been here, the chemistry with Dak has phenomenal.”

McCoy looked as if he hadn’t started a game in a long time early, throwing into double coverage on his first play and fumbling while trying to scramble on his third, with the Redskins recovering and punting.

But McCoy settled in with a couple of third-down passes to Jordan Reed to keep drives going, then hit Vernon Davis in stride on a 53-yard touchdown — the longest Washington completion of the season — for a 7-7 tie.

The Cowboys were having all the fun before the Redskins pulled even, with Elliott scoring on a 16-yard run and dropping $21 into a giant Salvation Army red kettle behind the end zone. The cash was handed to him by a team photographer.

As a rookie in 2016, Elliott jumped into the kettle on the same part of the field after a touchdown in a 31-26 win over the Redskins. That season’s NFL rushing champion, who wears No. 21, was fined for the stunt and later donated $21,000 to the Salvation Army.

After scoring on a scrambling 5-yard run for the third Dallas touchdown in less than eight minutes and a 31-13 lead, Prescott let Elliott help him into another kettle on the other end of the field, drawing the same unsportsmanlike conduct penalty Elliott did two years ago.

“I didn’t have any plans to do that. Zeke did,” said Prescott, who was 22 of 31 for a season-high 289 yards in his third straight game without an interception or a lost fumble. “He showed his strength. Once he had me in the air, I said I’ve got to own it now and just figured I’d jump in there before I got hurt.”

Cowboys rookie receiver Michael Gallup had two catches for 19 yards less than a week after his brother died by suicide. The team gave him the game ball. He stayed with his family after last weekend’s game in Atlanta, and will attend the funeral Friday. Gallup didn’t talk to reporters after the game.

Washington receiver Trey Quinn, the final pick of this year’s draft at the home of the Cowboys and a former player at nearby SMU, had a 30-yard punt return to the Dallas 25 to set up his own 10-yard touchdown catch for Washington’s only lead at 13-10 in the third quarter.

Redskins running back Adrian Peterson left briefly in the first quarter with a shoulder injury but returned. Still, he wasn’t nearly as effective as in Washington’s 20-17 win in the first meeting. The four-time All-Pro finished with 35 yards on 12 carries after going for 99 yards at home.

After the game, Peterson wouldn’t discuss his comments in a recent report that he still uses a belt and a switch to discipline his son. In 2014, he faced felony charges of child abuse in his home state of Texas before pleading no contest to a misdemeanor in a settlement.