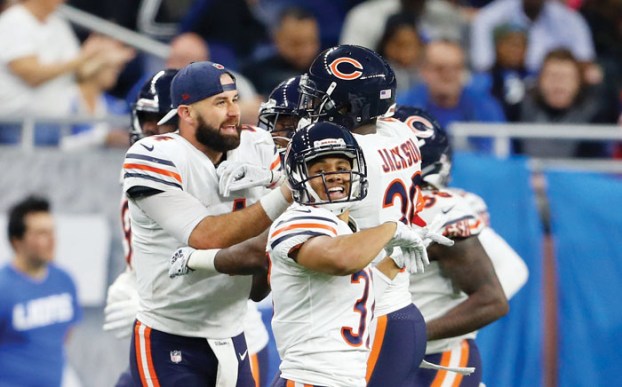 Chicago Bears quarterback Chase Daniel, left, congratulates free safety Eddie Jackson (39) after Jackson returned an interception 41-yards for a touchdown during the second half of an NFL football game against the Detroit Lions, Thursday, Nov. 22, 2018, in Detroit. (AP Photo/Paul Sancya)

Chase Daniel fills in, leads Bears to win over Lions

DETROIT (AP) — Chase Daniel outplayed Matthew Stafford, proving an NFL journeyman can beat one of the highest-paid players in the league.

Daniel threw a career-high two touchdowns to keep the Chicago Bears rolling with a 23-16 win over the Detroit Lions on Thursday, filling in very well for injured quarterback Mitchell Trubisky.

“You don’t know when these opportunities will come,” the 32-year-old Daniel said after making the third start of his career and first in nearly four years. “You just have to make the most of them.”

Daniel finished 27 of 37 for 230 yards, setting career highs in each category. He threw a go-ahead, 10-yard touchdown pass to Taquan Mizzell in the second quarter and a 14-yard pass to Tarik Cohen in the fourth to give Chicago the lead again at 16-13.

It was quite a performance for Daniel, a player who has been used sparingly since the former Missouri star entered the league in 2010. He barely played for New Orleans, Kansas City, Philadelphia and Chicago, but gained respect from coaches and players for his preparation.

“Everyone in this locker room knew what he was going to do, and he didn’t let us down,” Mizzell said. “People forget how long he’s been in the NFL and how much talent he has. They talk about the number of games he’s started, but the people that practice with him every day knew that he was going to give us a chance to win this game.”

And unlike Stafford, Daniel didn’t make any costly mistakes.

Stafford was 28 of 38 for 236 yards with two interceptions late in the fourth, dooming Detroit’s chances to win. The Lions drafted Stafford No. 1 overall in 2009 and gave him a $135 million, five-year extension last year.

The NFC North-leading Bears (8-3) sealed their fifth straight victory with Kyle Fuller’s interception in the end zone with 1:07 left.

Chicago broke a 16-16 tie on Eddie Jackson’s 41-yard pick-6 with six minutes remaining. The safety stepped in front of a pass in the flat intended for tight end Michael Roberts, taking advantage of the fact that Stafford didn’t look at another target as he dropped back.

“Got to see (Jackson) a little better than I did,” Stafford said.

Jackson, a 2017 fourth-round pick, has turned two of his four interceptions into scores this season and has five total touchdowns in his career.

“He’s had an unbelievable season so far, one that I don’t know that I’ve seen,” Chicago coach Matt Nagy said.

Jackson said simply picking off passes is not enough for his team, which has scored five times off interceptions this season.

“We are always thinking about putting points on the board,” he said. “It is about attacking.”

The Lions drove to the Bears 11 on their last possession, but couldn’t score because Stafford’s pass to Roberts was picked off by Fuller.

Detroit (4-7) has lost four of five, plummeting to last place in the division.

The Lions did start relatively well, becoming the first team to lead Chicago in a month when Blount ran for his first of two touchdowns early in the second quarter. Blount had a season-high 88 yards rushing.

The Bears, though, were able to come back and go ahead thanks to a mistake-free quarterback and their defense that leads the NFL with 29 takeaways, including 20 interceptions.

“Our defense stepped up on the last two drives with takeaways and that’s why they’re the best in the league,” Daniel said.

The Bears came up with some creative ways to celebrate two touchdowns.

Cohen went down to his side just beyond the end zone, putting his hands under his head as if he was taking a nap like many Americans do on Thanksgiving. After Fuller’s interception, Prince Amukamara held the football as if it was a microphone and his teammates played the role of backup dancers and fans in a nod to Motown .

“It’s a fun time,” Nagy said. “That’s who we are right now. Guys are wanting to outdance each other.”

Bears: RB Benny Cunningham (ankle) left the game in the first half. Amukamara was evaluated on the sideline by the team’s medical staff in the second half and returned.

Trubisky was inactive after being listed as doubtful with a shoulder injury. Nagy said it is a short-term injury, but he wouldn’t say when the No. 2 pick overall from the 2017 draft will return.