Back in Japan, Ohtani says MLB a whole new ballgame 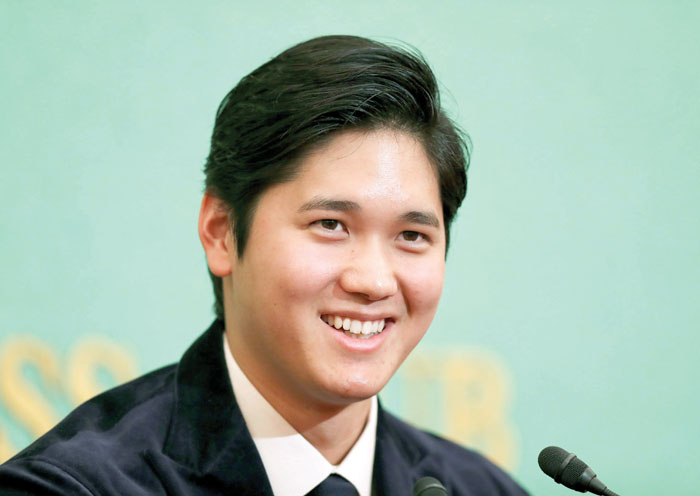 TOKYO (AP) — Shohei Ohtani says it didn’t take him long to realize he was competing at a much higher level during his first season in Major League Baseball.

Ohtani returned to Japan and held a news conference at the National Press Club, where he spoke at length on his first season with the Los Angeles Angels.

“Everything was different — the baseball, the culture,” Ohtani said Thursday. In the baseball, “I was aware right away of a higher level of power, technique and speed.”

Ohtani won American League Rookie of the Year earlier this month despite an elbow injury that disrupted his switch from Japan to the major leagues and likely will prevent him from pitching next year.

He didn’t play between June 4 and July 3 because of a sprained ulnar collateral ligament in his right elbow, an injury the Angels were aware of when they signed him last winter.

The 24-year-old right-hander had Tommy John surgery on Oct. 1 and hopes to be able to help the Angels at the plate next season. He probably won’t take the mound again until 2020.

In an indication that he plans to continue both pitching and batting, Ohtani said having surgery made the most sense.

“I’m glad I had the surgery,” Ohtani said. “Of course, there was some reluctance over whether to have it but considering the long term I decided it was necessary.”

Ohtani was also asked about the 2020 Tokyo Olympics, where his sport is making a return after being dropped after the 2008 Beijing Games.

Players from MLB are unlikely to take part as the league has said it will not shut down its season for the Olympics.

The questions weren’t all game-related. On a lighter note, Ohtani said he has no immediate plans to get married and that he won’t be able to give an acceptance speech in English for his Rookie of the Year Award.

Entomologist Bob Anderson of the Canadian Museum of Nature has dubbed a newly discovered species of beetle Sicoderus bautistai after the former Toronto Blue Jays star.

Anderson decided to name the insect — known as a weevil for its long snout — after Bautista because of the bat-flip home run that propelled Toronto to the 2015 American League Championship Series.

“It was one of those moments in Toronto baseball sort of lore where he hit this big home run,” Anderson said Thursday. “And I thought what a great way to kind of recognize his contributions to Blue Jay baseball and to Canadian baseball, really, as a whole.”

The 38-year-old Bautista played for Toronto from 2009 to 2017. He’s a free agent after splitting last season with the New York Mets, Atlanta Braves and Philadelphia Phillies.

The Sicoderus bautistai is a tiny black weevil that is found in Bautista’s native Dominican Republic.

The 33-year-old Venters was 5-2 with three saves and a 3.67 ERA for Tampa Bay and Atlanta, which reacquired him on July 26. He had not appeared in the major leagues since 2012, undergoing Tommy John surgery for the second and third times.

The awards, announced Tuesday, are voted on by beat writers for MLB.com.

Chase Daniel fills in, leads Bears to win over…