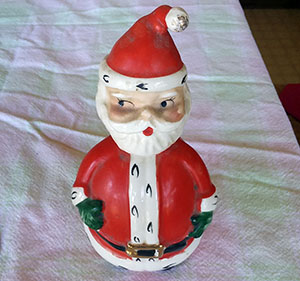 My grandmother Ella in Jackson, Tennessee, was the best cook I’ve ever known. Her Thanksgiving dinners — always served promptly at noon per their custom from former farm life — were the stuff of legend. But it wasn’t just the food on the table that was so interesting to me as a kid; it was the preparation, too.

As soon as I awoke in the morning, I was summoned to the kitchen to inspect the turkey, which would always be perched improbably with its legs hanging over the edge of the kitchen counter. I have since tried that trick, but it seems that the “preacher’s nose” always gets in the way. (This was well before our current salmonella obsession, which ordains that even the Chick-fil-A corporate logo is suspect.)

Once I had officially approved the bird, it was committed to the oven, and it wasn’t long before sumptuous aromas began to emanate from the kitchen. We kids were generally meant to stay out from underfoot during that morning, but about an hour before dinner I would again be invited in as Chief Dressing Inspector. Grandmommy wanted to be sure the taste was just right before she put the pans in to bake. Her cornbread dressing was very moist, and the giblet gravy she made to top it off had little bits of hard-boiled egg in it.

Her homemade yeast rolls — I would kill for one now — came out just as everyone was seated. Curiously, they never had real butter; I think they had developed a taste for margarine during the Depression. Now that I think about it, I am not sure I even tasted butter until I went to college unless it was maybe at IHOP. Fortunately, in those days there were no “trans-fats,” so I somehow survived.

Now it was time to get down to some serious business: the platters were all passed around to fill up everyone’s first plate. I will swear under oath that no one ever had just one plate and then stopped.

The turkey was fantastic — I preferred the dark meat — and I would also be served with great ceremony a private duck from the pressure cooker. I am not certain the season was open before Thanksgiving in those days, so I assume Granddaddy found one that for some reason had just died of natural causes at Lick Creek.

He — and later, my wife Sonia after she joined the family — had trouble getting every element on their plates to “even out” just right toward the end of dinner, and it was fun to watch them get just another little spoonful of sweet potato casserole with marshmallows or butterbeans boiled with fatback and maybe a third of a roll to construct that last perfect bite.

No one had much room for dessert, but there were pies aplenty. Fortunately, the boiled custard season had begun, and the adults who wanted to could add a little extra flavor from “Santa,” a little ceramic bottle with a cork stopper attached to his head with a bit of the recipe inside. In those days, Madison County was dry, so it basically took a trip to Memphis to replenish Santa after the holiday season and pick up the Cherry Heering (Grandmommy was Baptist, but deep down she was even more Danish) that her doctor had prescribed, along with a daily afternoon soap opera, for her heart.

That Santa has for years occupied a place of honor among our holiday decorations. Lately, I’ve been pondering Santa Succession: Do I leave him to my next oldest sibling, who shares the same sweet memories, or to my first born, like the British crown? Or to the baby, whose eyes gleamed with delight when she saw him for the first time today? I’ll let you know when I figure it out.

My fond wish is that everyone could experience the love and warmth we shared at that table back then and ever since in my family. I have been deeply blessed. Happy Holidays!

James Burns: A stranger at the table