David Cook: ‘What would I be today?’ 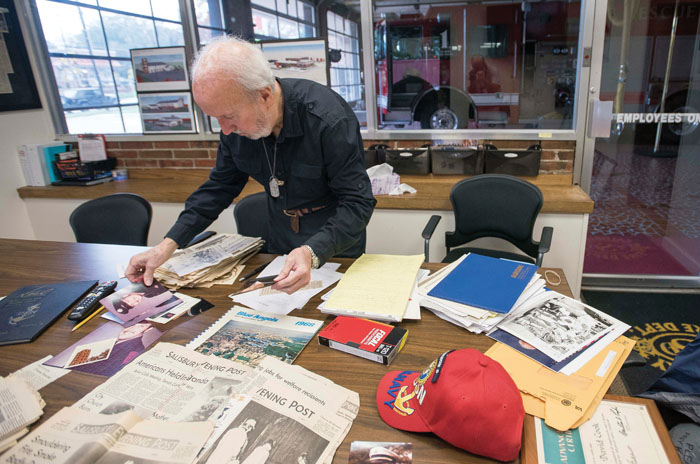 SALISBURY — Some veterans’ stories are tales of battle, courage and sacrifice.

Jerry David Cook talks instead of what he gained by serving in the Navy five decades ago — and the promises he made as he tread water one night in the Gulf of Mexico.

They were promises he strove to fulfill the rest of his life — as a firefighter, the city’s first fire inspector, a hospital risk management director.

Cook, 70, grew up in Cooleemee, one of five children. One of the boys had polio and needed constant attention, so the entire family stuck close to home.

Cook graduated from Davie County High School in 1966 and enlisted in the Navy. With the Vietnam War raging halfway around the world, he was stationed at Florida’s Pensacola Naval Air Station,  “the cradle of naval aviation.”

There, he worked on rotary-wing craft on Ellyson Field, helping train pilots and keep their helicopters in top shape.

“Our jungle was the Blackwater National Forest in Alabama,” Cook says.

His most meaningful moment actually happened off-duty. He and a friend, Buddy White, went boating on a Saturday — the date was March 25, 1967 — and after dodging one storm got surprised by another.

Cook says he struggled to start the pull-crank engine to head back, and White began working the oars. As the waves grew higher, they decided to head for a nearby buoy.

White made it to the buoy, but waves swept Cook away. He found himself alone and unprotected in the gulf’s great expanse, wearing a canvas life preserver that would be good for only a few hours.

All he could do was tread water and float.

He later learned that his friend was picked up from the buoy after clinging to it for about three hours. Then, about 6:30 or 7 p.m., the Coast Guard began searching for Cook.

Meanwhile, Cook had his hands full, he says.

The current carried him into swarm after swarm of jellyfish-like creatures he’d never seen before — Portuguese man o’ war, known for long tentacles that deliver a venomous sting. They stung him countless times.

“It was painful, and then it became numb.”

Cook’s eyes tear up as he remembers his conversations with God during his night adrift under the stars. He was 18 years old, he had a girlfriend and he was not ready to die.

He promised to be a better person, to make his life into something.

After about 16 and a half hours, at 7:30 in the morning, a helicopter crew spotted Cook in the water and pulled him up.

“A helicopter pilot told me you don’t come out of the Gulf of Mexico alive overnight. You just don’t.”

Cook was waterlogged and barely conscious. He remembers hearing someone say, “Oh my God, this guy’s still alive.”

He had been stung all over, and much of his body was swollen. The toxins in the creatures’ tentacles had shut down his kidneys.

They whisked him to the Naval Hospital in Pensacola.

The girlfriend he’d thought about while he was adrift visited him and made a confession, Cook says. An hour before she learned he was lost at sea, she’d been talking to her priest about how to break up without hurting him.

So there was heartache in addition to physical pain — and building up strength to walk again.

“It took a while for my system to recover. But I’m going to be real honest with you — I was a different person.”

Discharged in April 1968, Cook came away from the Navy with more than the memory of that night. Since he worked around flight fuel, he had firefighter training. He saw in the Salisbury Post that the Salisbury Fire Department had an open position.

He interviewed with Chief Fred Shipton, who hired him the next day.

Thus began a 12-year career within the close-knit family of the Fire Department. He made captain in five years, in 1973, and was promoted to assistant chief in 1977. As fire inspector, he did about 3,000 inspections a year, he says.

To serve as fire marshal, he took law enforcement training so he could prosecute arson cases. He also became a special deputy.

He married and they had a son, Brian David Cook, a beautiful child with a full head of hair and a problem that wasn’t visible at first. Brian had cerebral palsy and could not see.

Brian wasn’t expected to live past age 1 and was in and out of the hospital seven times in those first 12 months, Cook says. “That was a tough year.”

Cook blames himself and his constant absence — at a time when Brian needed much attention — for the breakup of the marriage. Brian lived to be 38.

Cook says he had to put family worries behind him when he was on duty at the fire department.

“When you walk through those doors, you’ve got to have your mind on what you’re doing. … A lot of lives are in your hands.”

He has saved newspaper clippings and photographs from his firefighting days.

The biggest fire he ever fought was the inferno set off by an explosion at National Starch’s Proctor Chemical plant in 1983.

And he remembers the woman who came in the back door of Central Fire Station one day carrying a little baby who had stopped breathing and turned blue. “I got the baby while the driver got his equipment in the van and we headed for the hospital, and I brought that baby back.”

He watched the child grow up, he says. Later when he worked at Rowan Memorial Hospital, the mother would stop at the front desk and ask for Mr. Cook.

“I would come around and see it was them and hug and kiss. She said, ‘If it wasn’t for this man, my baby wouldn’t be here today.’ You know how that makes me feel.”

In 1980, Cook became Rowan Memorial Hospital’s safety and security chief and went on to be director of risk management. Now Novant Health Rowan Medical Center, the hospital let him go at the age of 60 after 27 years there.

As he looks back over his life, he sees how the Navy opened his eyes to the world beyond Cooleemee and taught him skills. Then his first job out of the service gave him a springboard to a fulfilling career.

“The fire service was somewhere I was allowed to grow,” he says.

Often his mind goes back to that night in the Gulf of Mexico. The experience and the promises he made — and the God he made them to — have always been with him.

“It was not like I carried around a list, but it was etched in me. … If that had not happened to me, what would I be today?