Woods-Mickelson match will be unique experience for viewers 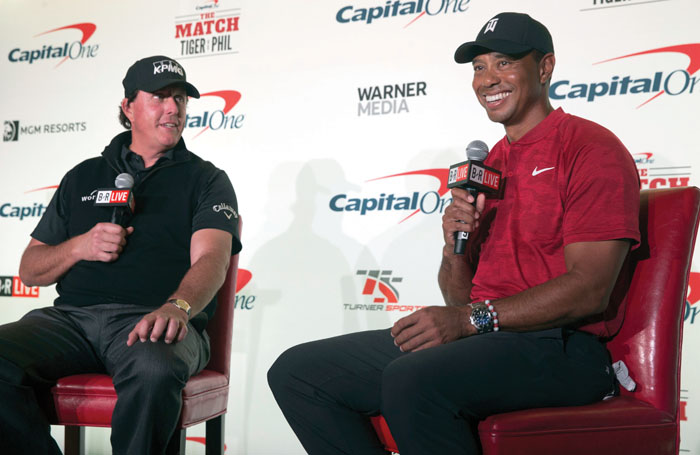 Phil Mickelson, left, and Tiger Woods speak during a news conference at Shadow Creek Golf Course in North Las Vegas Tuesday, Nov. 20, 2018. The golfers will face off in a match play event on Friday. (Steve Marcus/Las Vegas Sun via AP)

Golf used to have a prominent place on the Thanksgiving weekend calendar with The Skins Game. That made-for-TV event ended in 2008 but Tiger Woods and Phil Mickelson will have their own high-stakes showdown Friday.

After years of discussion, the two will compete in “The Match” at Shadow Creek in Las Vegas, a $9 million winner-take-all event that will air on pay-per-view.

Many wondered if a Woods vs. Mickelson match was a thing of the past.

The two have combined for 123 PGA Tour victories and 19 majors but had struggled in recent years. Talk of a match was revived earlier this year when Mickelson won in Mexico and Woods started to be competitive again before winning at The Tour Championship in September.

Mickelson said the original premise was both partnering up with some of the sport’s younger stars, but television executives and fans have always wanted to see the two go head to head.

“To have the opportunity to go head to head and to win is just. . it’s great to win the 9 million. I just don’t want to lose to him and give him the satisfaction, because the bragging rights are what’s going to be even worse than the money,” Mickelson said during a press conference Tuesday.

Both were part of the U.S. team at the Ryder Cup but have not competed since then.

“After the Ryder Cup I shut it down for about 3-4 weeks and started to basically work on my body and try to get it stronger again,” Woods said. “I was really looking forward to the break, but I’m really looking forward to getting back to playing again. I missed competing, and to be able to go against Phil like this gets my juices flowing for sure.”

Mickelson said he has been working on his game the past four weeks and that this is a good way during the offseason to prepare for next year.

Many golf fans are used to made-for-TV events that have been genteel affairs. This will be the complete opposite.

For starters, this is believed to be golf’s first pay-per-view match. This is the first major event with Warner Media, which was formed after the recent merger between Time Warner and AT&T. Turner Sports and BR Live are producing the event and it is being shown online as well as on DirecTV and AT&T U-Verse and other cable and satellite outlets for $19.95.

Ernie Johnson Jr., who has done the PGA Championship for Turner, will be the main announcer but it will feature others including Natalie Gulbis, Charles Barkley and Samuel L. Jackson

The broadcast will feature both golfers mic’d up as well as the caddies (Joe LaCava for Woods and Tim Mickelson for his older brother). With it being on pay-per-view, there will be no commercial breaks and plenty of opportunities to hear both golfers try to one up each other with verbal jabs.

“It’s like a Tuesday practice round for a significant stake that makes us uncomfortable, but with the same type of banter that we’re used to that most fans aren’t privy to,” Mickelson said.

Woods and Mickelson used to be bitter rivals, but the relationship has improved in recent years as both got to know each other during Ryder Cups. But Darren Clarke, who has competed against both, expects the rivalry to intensify during the match.

“Different people think this is going to be a fun match but both are natural-born winners. At some stage you are going to see it get a bit uncomfortable as both will call out each other,” he said.

The most intriguing thing is the gambling aspect. The players will set their own odds on shots during different times and fans will be able to bet along with them. Clarke said gambling has been a part of the European Tour for years and it will be interesting to see how it does Friday.

Craig Barry, who is Turner’s executive vice president and chief content officer, is also interested to see how the side bets work out, especially since more states are approving sports gambling.

“It makes you follow along more and engage. It definitely does create a deeper and richer narrative,” Barry said.

Don’t expect gambling to become a part of Turner’s NBA and Champions League coverage, though, since that appears to be a long way off.

“This is very different than anything golf has ever done in the past. That’s one of the unique things about it. We’re able to showcase our sport in such a different light and all the different technologies we’re going to be bringing to this event, and doing it differently than any other golfing event has ever been done. That’s the exciting thing for not only myself and Phil, but I think for all the viewers that are going to watch,” Woods said.