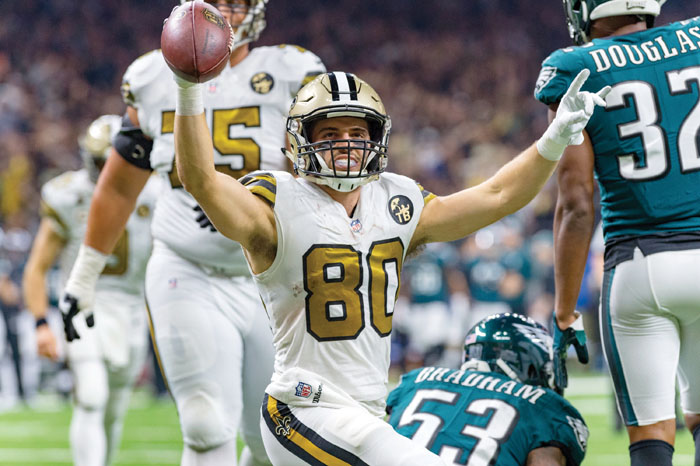 The Saints extended their winning streak to nine games with a 48-7 rout of the Eagles, handing them the most lopsided defeat for a Super Bowl champion.

And the Saints will also get an early start on trying to make it 10 wins in a row when they host NFC South rival Atlanta on Thanksgiving night.

Because of their impressive run, the Saints kept the No. 1 spot in the latest AP Pro32 poll . They received all 12 first-place votes and 384 points in balloting Tuesday by media members who regularly cover the NFL.

“The Saints’ offense keeps rolling along, to the point where the NFC playoffs might very well go through New Orleans,” Newsday’s Bob Glauber said. “And if that’s the case, can another trip to the Super Bowl be far behind?”

The Los Angeles Rams and Kansas City flipped spots after their 54-51 shootout on Monday night at the Coliseum. The Rams are No. 2 and the Chiefs are No. 3 as both teams enter their respective bye week.

Monday’s game was the third-highest scoring game in NFL history and the first game in the NFL when each team had at least 50 points. There were 14 touchdowns, including three by defensive players. There were 56 first downs and 1,001 combined yards.

The New England Patriots moved up two spots to No. 4 as they were on their bye week. The Patriots return to action when they face the New York Jets.

And despite overcoming a 16-0 second-half deficit at Jacksonville, the Pittsburgh Steelers slipped a spot to No. 5.

The Chicago Bears climbed four spots to No. 6 after their 25-20 win over Minnesota on Sunday. The Bears will open Week 12 when they travel to Detroit to face the Lions on Thanksgiving.

“The Bears are proving that defense, a running game and a league-leading turnover differential still matter in an era of wide-open football,” said Ira Kaufman of Fox 13 in Tampa, Florida.

The surging Houston Texans, who have won seven in a row after an 0-3 start, gained two places to No. 7.

The Los Angeles Chargers dropped three spots to No. 8 after blowing a 12-point lead and losing at home to Denver. And the Carolina Panthers also slipped a spot to No. 9 after losing at Detroit on Sunday.

The Vikings also fell three spots to No. 10 and will play their second consecutive NFC North opponent on Sunday night when they host Aaron Rodgers and the Green Bay Packers.