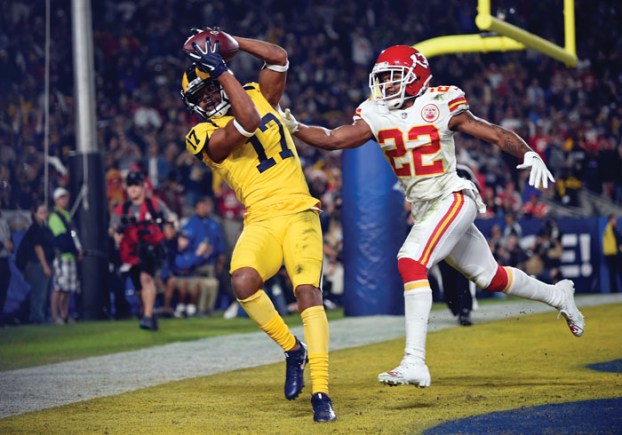 Los Angeles Rams wide receiver Robert Woods (17) catches a pass for a touchdown ahead of Kansas City Chiefs defensive back Orlando Scandrick (22) during the first half of an NFL football game Monday, Nov. 19, 2018, in Los Angeles. (AP Photo/Kelvin Kuo)

The Big 12 conference has come to the NFL.

Without a doubt, the Monday-night scoring extravaganza between the Rams and Chiefs was entertaining. It had more spectacular plays and head-spinning twists than a game of Madden or a matchup of teams from college football’s defense-challenged conference.

As for it being a pro football classic, no way.

And for those yearning to see a rematch in the Super Bowl, don’t count on it — unless each team finds a consistent defense.

Yeah, we know, there were several big defensive plays that produced points in Los Angeles’ 54-51 victory, the highest-scoring Monday night contest ever and the only time two teams have each exceeded 50 points in the same game. Aaron Donald might have cemented a second straight NFL Defensive Player of the Year award with his strip-sacks of Patrick Mahomes.

There were three picks, though two came when Mahomes was in desperation mode. There were four lost fumbles as each defensive line made its present felt — for a few seconds.

The box score looks as long as one of Andy Reid’s play sheets.

What America saw was Madden 19 at its most frenetic. And that’s exactly what much of the current sporting public covets. Give them receivers running free like deer in a meadow ; light shows of points on the scoreboard; announcers fawning over the action while ignoring the quality of performance; and offensive records galore.

This was a home run derby with major league sluggers in a Little League park. It was a hockey shootout with NHL skaters facing amateur goalies. A dunk contest on 9-foot rims.

Fantastic fun? For sure.

But it can also be seen as an indictment of how the NFL — helped along by college football’s evolution — has headed toward flag football.

How did we get to a point where the third-highest scoring game in NFL history, chock full of flying flags (21 accepted penalties for 195 yards), terrible coverage and some overzealous coaching is labeled a masterpiece?

“A couple of things are contributing,” says Hall of Fame coach Tony Dungy, now an analyst for NBC. “The skills of the players on offense and the way the coaches are designing things is one. And the practice schedule that has been reduced really favors the offense now.

“You can’t do as much work in the offseason and at training camp, and that hurts the defenses. Quarterbacks take their groups and they can get together and throw and work on their timing for two or three weeks. Defenses can’t do that, so they are behind the eight ball from the outset.”

And the rules and officials have evolved to favor receivers and quarterbacks.

It comes to fruition weekly. Consider that the NFL has had the most points scored (7,791), most touchdowns (895) and most touchdown passes (570) through 11 weeks in its history. The 54-51 frenzy is the punctuation mark.

At least so far.

Dungy and his NBC studio partner, former safety Rodney Harrison, bemoan the lack of fundamentals on defense. We saw as many examples of that on Monday night as we did tight spirals from Mahomes and Rams quarterback Jared Goff.

“A lot of coaches in general go over scheme so much and designing things and how you play your responsibility and all the things offensive teams can do,” Dungy says. “We have lost sight of the basics, you see the poor fundamentals.”

Adds Harrison, one of the best tacklers and cover guys at his position:

“One thing I have learned weekly and has become a lot more prevalent because of all the emphasis on the changing of the rules is that they don’t teach a lot of technique in college anymore. It’s all about a scheme and all these different formations and you try to trick people and do all this misdirection. Coaches spend so much time on plays they forget about teaching technique.

“Cornerback don’t have technique, they panic when they are down the field. The ball is in the air, they don’t look back, can’t make a play.”

It was something we saw plenty of Monday night. Of course, receivers such as Tyreek Hill and Travis Kelce, Brandin Cooks and Robert Woods can make any defenders look bad. But when skill players are uncovered so often, it makes you wonder if the offense is on a power play.

“As old school guys, we appreciate and we respect defense,” Harrison adds. “I said something (Sunday) night: If I was a general manager, I would never hire a defensive-minded coach as a head coach. The league is about scoring points and developing young quarterbacks; see Andy Reid and the Chiefs, Sean McVay and the Rams, Matt Nagy and the Bears. You have these coordinators that have a very creative mind for offense. But look at their defenses, they don’t have great defenses.

“The league has really changed.”

54-51 bears witness to that. With more likely to come.

By Mike London mike.london@salisburypost.com GRANITE QUARRY — No one is looking forward to a fresh basketball season more than East... read more