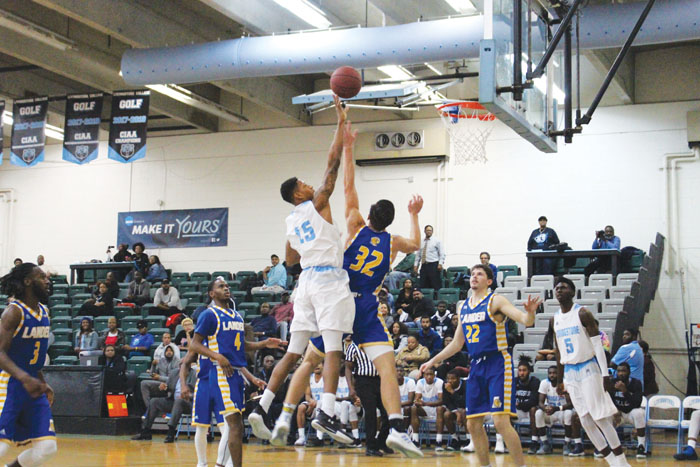 SALISBURY — It’s too soon to take Livingstone’s temperature, but things are heating up at New Trent Gym.

“We were really in a slump,” junior guard Roger Ray said after LC rallied from a 12-point deficit in the last 5:32 and treated a small crowd to an exciting win. “I was just trying to give the team some energy. I couldn’t let these guys down. Not today.”

It was an emotional night for Ray, who scored Livingstone’s final 14 points and 19 of its last 21. It would have been his late grandmother’s birthday.

“She raised me all the way up,” he said. “So I was thinking about her all day. It wasn’t just tonight, or just the game. It was the whole day. I finally took a breath, listened to the coaches and got a little aggressive.”

“I told him I understood how he felt,” Stinson said. “I know it weighed heavy on him, but I just kind of pushed him to do better. He was just going through the motions.”

Lander (1-3) took advantage. The visitors used a 20-8 scoring spree to take a 74-62 lead on a foul-line jumper by junior Marquel Wiggins.

“We were so lackadaisical,” said Livingstone’s Malik Smith. “We should never have been down that much. We should have come out stronger from the jump. But the turnaround, it all started with getting defensive stops.”

And a pair of free throws by senior Damante McNeill. The reserve forward contributed 11 points, four assists and three rebounds in 17 minutes off the Livingstone bench. “His back was hurting, so he couldn’t play a lot of minutes.” Stinson said. “But he sparked us big.”

The Blue Bears were still 10 points down when Lander’s Rahu Purdie converted a scoop layup with 4:12 remaining. “Hey, we’ve been counted out before,” Ray said afterward. “I told everyone to stay calm, keep fighting and let’s see what happens.”

Then Ray happened. The 5-foot-9 guard from Raleigh drained 3-pointers just 45 seconds apart, trimming the deficit to 78-74. Later he snatched a rebound, drove the length of the court and hit a layup to draw the hosts within 80-78 with 2:05 on the clock.

A bit of controversy entered play with 54.4 seconds to go. It was a one-point game when Lander’s Elijah Alston had a put-back from the left baseline wiped out by a shot-clock violation. “It was a violation,” said Lander coach Steve Roberts. “But the buzzer didn’t go off. That’s how it was explained.”

Livingstone took its first lead since the first half when Ray found a crease on the left side and banked home an off-balance, eight-foot jump shot. It was a defensive mix-up by Lander’s Morris Robinson that helped the Blue Bears go ahead, 81-80, with 39 seconds to play.

“I think they must have scouted that play and thought it was going to the other side,” Ray explained. “But he jumped it and I spun back to the weak side and made the shot.”

“It was Roger’s night,” said Smith, the sophomore who shot 5-for-9 from the field and scored 14 points. “He’s just a different breed. He’s a major player and a major teammate who leads by example. I’ve never seen anything like him.”

The game marked Jamarious Hairston’s return to Salisbury. The Lander freshman, a well-liked Carson High School graduate, shot 2-for-4 from the floor — and buried a tie-breaking 3-pointer with 13:27 remaining — finishing with eight points in six minutes.

“I’m in the rotation,” the 6-4 guard smiled. “And hoping to work my way up. In high school, I was one of the biggest guys out there. Here I’m like a point-guard, out on the wing taking shots.”

Hairston was greeted by about a dozen friends and family members afterward. “I’ve had this day circled for a long time,” he said. “It’s nice to come back.”

NOTES: Livingstone shot 53.3 percent from the field in the second half and finished 28-for-62. … Lydell Elmore hit five of his 10 field goal attempts and netted 11 points, giving the Blue Bears four scorers in double figures. … LC takes a holiday break before returning to action Nov. 29 at home against Benedict.