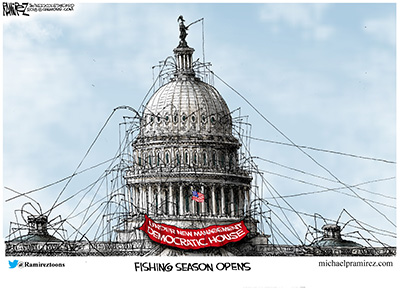 It is hard to believe that even today 42 percent of the people in a survey still believe Russia colluded with Trump to steal the election from Clinton, the Queen Apparent. When Mueller agreed to be the special counsel to investigate the possibility of crime, there was no crime to investigate, only this absurd accusation of collusion.

Mueller has investigated for two years now, and what has he found? Nothing that would even be suspicious of collusion. He has investigated and tried in court people around the Trump organization for crimes not related to Trump’s campaign. The purpose of this was to suborn testimony from the people to lie or to give up information that would show Trump to have committed some grievous crime, and what has he found? Nothing. This is a method used by unscrupulous lawyers, to persecute the people around someone they want to destroy. This is the real objective of those who selected Mueller as the special counsel, the destruction of Trump.

President Trump has accurately described the investigation as a witch hunt, a fishing trip to find something to call a crime and destroy his presidency. The fact that Mueller has found nothing really doesn’t matter; the purpose, since there is no crime to find, is to continue this persecution during his term in office and discourage Trump not to run for four more years and complete his legal term as president.

This behavior by Democrats, never-Trumpers, progressives, socialists, liberal press and media outlets is verging on deranged behavior — even some might say as being crazy. President Trump keeps on being Trump and it’s driving them — yeah — crazy.