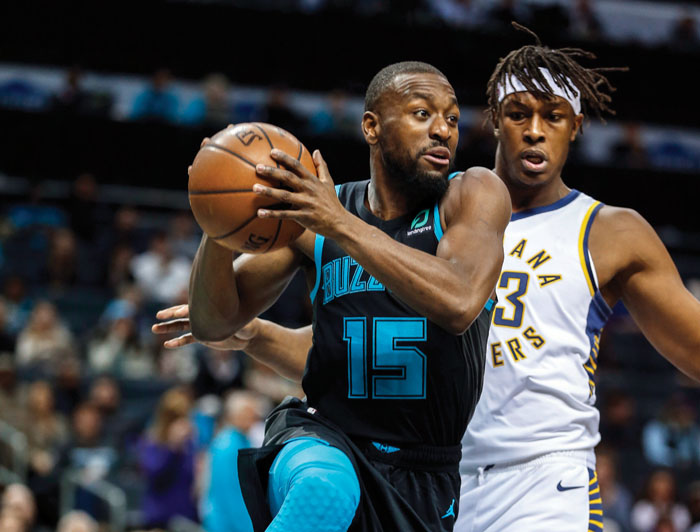 By STEVE REED, AP Sports Writer
CHARLOTTE (AP) — Jeremy Lamb scored 21 points, Kemba Walker had 16 points and a season-high 11 assists and the Charlotte Hornets defeated the Indiana Pacers 127-109 Wednesday night.
Walker, the NBA’s leading scorer entering the game, had scored 103 points in his previous two games, including 60 against the Philadelphia 76ers on Saturday night. But Walker only attempted 10 shots, instead taking advantage of double teams to find teammates for open looks.
Charlotte shot 62 percent from 3-point range, making a season-high 18 of 29 shots from beyond the arc.
Dwayne Bacon had 18 and Cody Zeller 15 for the Hornets, who improved to 6-3 at home.
Bojan Bogdanovic had 20 points for the Pacers, who played for a second straight game without Victor Oladipo, who remains out with a sore right knee. Indiana had its three-game winning streak halted.
Rookie Miles Bridges had a nice stretch late in the third quarter to help push Charlotte’s lead to 21 points. He knocked down back-to-back 3-pointers and then rejected shots by Thaddeus Young and Cory Joseph seconds later.
TIP INS:
Pacers: Domantas Sabonis was 7 of 7 for 15 points before rolling his ankle midway through the second quarter. He returned in the second half, but never scored again and fouled out with 6 minutes left.
Hornets: Marvin Williams was taken to the locker room in the third quarter with a face contusion and a bloody nose after taking a knee to the head from Young while on the floor. He returned to the bench, but did not play. … Frank Kaminsky had 11 points, which was more than he had scored all season (nine). … Malik Monk broke out of a 0-for-14 slump from beyond the arc by making 3 of 6 3-pointers.
UP NEXT
Pacers: Host Spurs on Friday night.
Hornets: Visit Thunder on Friday night.
___
More AP NBA: https://apnews.com/NBA and https://twitter.com/AP_Sports