High school football: Caldwell getting it done both ways for Cavs 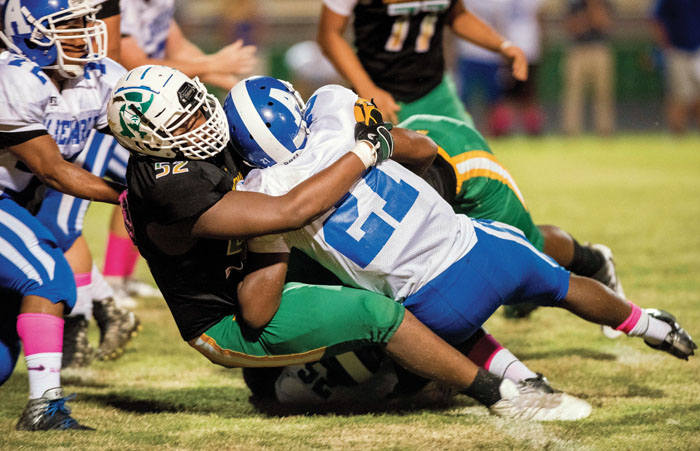 SPENCER — Ask where you can locate Benjamin Caldwell and folks at North Rowan shake their heads and shrug their shoulders.

They’re not sure who you’re talking about.

To get good directions, you have to ask for “Rhode Island,” as Caldwell is known to every North coach and teammate.

Ask for “Rhode Island” and people are quick to point out a pleasant youngster who looks school-bus wide, even without shoulder pads. Caldwell claims 250 pounds, but he actually looks bigger. That 250 or so is wound pretty tightly on a 6-foot-3 frame, mostly in his chest, shoulders and massive arms. Very little of it is around his midsection.

There were rumors that Caldwell, one of North’s captains, got his nickname because he was roughly the same size as the tiny New England state, but he explains that Rhode Island was once his home.

“We lived in Rhode Island, but my mom was looking for a fresh start and she had family here,” Caldwell said. “We moved here when I was a freshman.”

Caldwell played on the offensive line as a sophomore for the Cavaliers. He alternated between offense and defense as a junior, searching for a permanent home.

“He bounced around,” North coach Ben Hampton said. “He played either offense or defense. Mostly he played offense, but he constantly bugged us about playing defense. He loves defense.”

Just about every high school coach wants to play two-platoon football. There’s a reason for that. Most of the time a fresh player is going to be better than a tired player who is going both ways, even if that weary player is an exceptional athlete. That’s especially true in the fourth quarter.

But sometimes rosters are too thin to permit two-platooning. East Rowan managed a 6-6 season with very limited numbers this year because skill players such as Christian Bennett, Sam Wall and Gabe Hinceman gave everything they had on both sides of the ball.

1A North, which had a roster of nearly 70 players two years ago when it was still 2A, now has a 40-something roster. So Hampton decided to place a lot on Caldwell’s thick shoulders.

“We really didn’t have any choice,” Hampton said.

“Sure, I get tired,” Caldwell said. “But it’s a lot easier now that the weather has gotten colder. In August, in the heat, I would get cramps. It was tough.”

On offense, Caldwell is the lynchpin of North’s line. The left tackle, his job on pass plays is protecting the blind side of right-handed quarterback Willis Mitchell, who has thrown 16 TD passes.

He’s also North’s most devastating run blocker and has paved the way for a huge season for outstanding back Malcolm Wilson .

Wilson combines relentless effort with unlimited energy and has barreled for 1,723 rushing yards and 25 touchdowns.

“Caldwell has been an animal in the running game,” Hampton said. “He’s pancaked 30 or 40 guys. Once he gets his hands on someone, they can’t get loose. He’s the nicest guy in the world off the field, but on it, he’s a nasty player.”

North (9-2) has put up fine offensive numbers, 34 points per game and 354 yards per game, even with a lot of running-clock second halves against hopelessly overmatched Yadkin Valley Conference opponents.

“I look at being the left tackle, the blind-side guy, as a big honor,” Caldwell said. “Offense is all about executing and taking care of your responsibility.”

While he’s pleased with his work on offense, it’s his attacking, physical role in North’s 4-2-5 defense that brings a smile to Caldwell’s face.

He plays the 3-technique for the Cavaliers, which means he’s a tackle lined up on the outside shoulder of a guard. It’s a position that allows him to use his power and quickness as a disruptor. He has 12 tackles for loss.

“He just blows up running plays and he’s also been our most effective pass-rusher on the defensive line,” Hampton said.

North has six shutouts, one short of the school record set back in 1985.

North’s linebackers and defensive backs probably are better known than the linemen, but Caldwell and Josiah Hawthorne have led a punishing front four.

“Offense can be more individual, but defense is all about the unit,” said Caldwell, who hopes to attract college offers. “I do like defense best. You can be aggressive and get after it.”

The Cavaliers, who had a first-round bye in the playoffs, will gather for a Thanksgiving breakfast today.

North hosts Polk County at Eagle Stadium on Friday at 7:30 p.m.  in a second-round 1AA matchup.

The Cavaliers will be the only Rowan team in action.  A preview of the game will be in Friday’s edition.