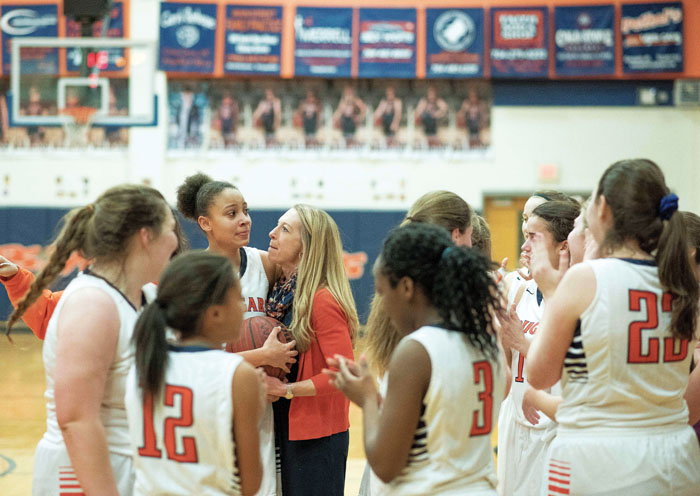 CHINA GROVE — Anderson University spotted Carson’s McKenzie Gadson at Elon’s basketball camp in the summer of 2017, and she quickly became a recruiting priority for the Trojans.

Gadson, one of the county’s finest athletes and a basketball player who is still blossoming, signed with the Division II South Atlantic Conference school last week.

“Anderson texted me just about every day, called me as often as they could and they came to see us play against North Iredell last season,” Gadson said. “I got the feeling that Anderson’s coaches really liked me as a person and really liked me as a player. They never stopped showing interest. They made me feel wanted.”

“The classroom work was never easy, but I believe in getting stuff done,” Gadson said.

Carson coach Brooke Stouder offers girls in her program who are potential college recruits one major piece of advice.

Gadson obviously is celebrated by Anderson. She’s also a potential difference-maker as a wing player in the SAC. While she’s an undersized forward at 5-foot-8, her length and extreme athleticism allow her to play much taller.

How athletic? Well, she’s the reigning Rowan County champ in the 100 meters and the long jump. Because of her combined success in basketball and track and field she was the Post’s Rowan County Female Athlete of the Year for the 2016-17 school year.

“I’d say my strengths as a player are running the floor and defending,” Gadson said. “I’m athletic and I attack the basket well.”

Her perimeter game will continue to develop at Anderson. Carson never seems to have much size and needed Gadson to play exclusively in the post her first two seasons. She started making the transition to a wing player as a junior, but she’ll probably still be the Cougars’ top rebounder.

“She’s always done whatever we needed her to do,” Stouder said. “She’s one of the most humble and unselfish players I’ve ever coached. She’s always been about what’s best for Carson, not what’s best for McKenzie. She’s so unselfish that it’s remarkable that she reached 1,000 points as a junior. She’s someone who’s always looking to make the extra pass.”

Gadson didn’t grow up in China Grove. She and her twin sister Mikaila, who will be signing with UNC Wilmington track and field on Monday, arrived from Orlando, Fla., when they were in the eighth grade.

Stouder started hearing stories about how athletic the new girls were. She was wowed when she got a first-hand look at McKenzie in summer camps prior to her freshman season.

“McKenzie is still the nicest surprise I’ve had in all my years of coaching,” Stouder said.

Gadson has been a fine scorer for the Cougars, averaging double figures three straight seasons, with a steady stream of 15s and 17s and a career high of 30 points. She’s been tremendously efficient, someone who’s going to shoot better than 50 percent on 2-point attempts and make two-thirds of her foul shots. She averaged 12.8 points and 5.4 rebounds as a junior.

Her defense is still ahead of her offense. As the point person on Carson’s 1-2-2 press, she creates havoc with long-armed deflections. If Carson gets a steal, she’s in position to finish.

“She’s been a key cog in our press and she’s also an outstanding on-the-ball defender,” Stouder said.

Gadson’s role will expand this year to include being the team leader. Carson graduated its best scorer and ball-handler Olivia Gabriel, now at South Carolina State, as well as Maren Shumaker, a hustler who was the loudest communicator on the floor.

“It’s exciting to see McKenzie being more vocal this year,” Stouder said. “We’ve got some experience, but this is still a very young team with a lot of sophomores. McKenzie’s presence instills confidence in everyone.”

The year before Gadson joined the varsity Carson was 12-13.

“It’s been fun because I didn’t know when we moved here if I’d be good enough to play,” Gadson said. “This is going to be a really good season for us.”