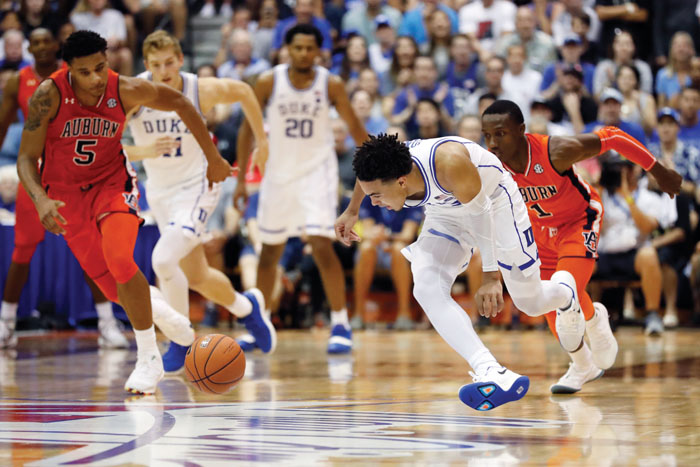 The Tigers, unlike the Blue Devils’ first four opponents, fought back, going right back at the top-ranked Blue Devils.

Duke withstood its toughest test of the season so far, outlasting No. 8 Auburn 78-72 Tuesday night to reach the Maui Invitational title game.

“Big time game. Both teams played so hard,” Duke coach Mike Krzyzewski said. “That was a heck of a win for us. To play this level of game at this time of the year is amazing for us.”

Duke (5-0) came into the game as the tournament favorite and looked like it would run Auburn out of the gym after racing past San Diego State in the opener.

The Tigers (4-1) clawed back to pull the Blue Devils within reach, yet could never get a firm grip.

Duke answered every Auburn challenge, earning a chance to play No. 3 Gonzaga or Arizona for the chance at an unprecedented sixth Maui Invitational title.

Zion Williamson provided the wow factor with acrobatic moves to the basket, finishing with 13 points and nine rebounds.

Jared Harper nearly kept the Tigers in it singlehandedly with deep 3-pointers in the second half. He had 22 points and Bryce Brown 16 for Auburn.

“We’re very disappointed that we weren’t able to take advantage of the opportunity,” Auburn coach Bruce Pearl said. “Our great strength is our balance and I think when we continue to become a little bit more balanced in many ways we’ll continue to become a better team.”

The Blue Devils came to Maui yet to be tested, leaving fans wondering what they’ll do next through the first four ooh-and-ahh-inducing routs.

Duke stymied Auburn defensively early, limiting the Tigers to 4-of-20 shooting while jumping out to a 20-8 lead.

But Tigers would not lay down that easy. Boosted by a large contingent of rowdy supporters, they held Duke without a field goal for five minutes, got out in transition and whittle what seemed like an insurmountable lead to six just before halftime.

Duke tried to run away with it by scoring the second half’s first eight points, Auburn clawed its way back, trimming what was once a 17-point deficit to 61-56.

But every time the Tigers tried to get close, the Blue Devils had an answer with an alley-oop dunk or a Bolden block.

Talen Horton-Tucker had 26 points and 14 rebounds, Michael Jacobson added 23 points and Iowa State ran away from Illinois in the second half for an 84-68 victory to reach the fifth-place game.

Down to eight scholarship players due to injuries and suspensions, Iowa State (4-1) bounced back from an opening loss to No. 3 Gonzaga with a strong game at both ends.

San Diego State (3-1) was blown out by top-ranked Duke in its Maui opener and fell behind by 19 early against Xavier (2-3). The Aztecs put together two big runs to go up nine, but Xavier rallied within 64-63 with three minutes left. The Aztecs pushed the lead back to six and hit 10 of 12 free throws in the final 47 seconds to complete their third-largest comeback since 1996-97.

FORT WORTH, Texas (AP) — Kenny Cooper turned a steal into a breakaway layup that put Lipscomb ahead only seconds after halftime at No. 18 TCU.

The Bisons never gave up the lead and went on to win 73-64 on Tuesday night, their first victory over a Top 25 team .

The Bisons (4-1), who trailed by 14 points early in the game, pushed in front by 12 after halftime before TCU’s Kouat Noi missed a potential tying 3-pointer with 90 seconds left. Garrison Mathews grabbed the rebound and made a game-sealing 3 at the other end.

Mathews scored 23 points, Cooper had 17 and Rob Marberry 13 for the ASUN Conference preseason favorites, who had been 0-13 against ranked teams since 2006. All of those losses were by double digits.

“It’s a big win,” Alexander said. “We talked about it before the game, we talked about it at halftime — a chance to give Lipscomb a win that it had never had before, against a ranked team.”

Alex Robinson had 17 points, 10 rebounds and six assists for TCU (3-1), which lost a November game for the first time since 2015. The Horned Frogs’ 18-game winning streak during the month had been the second-longest among Division I programs, behind only Virginia’s 21 in a row.

“We knew how good these guys were,” TCU coach Jamie Dixon said. “When we scheduled, we knew they’d be all seniors, they’re all back, they were in (the NCAA) Tournament last year, it’s early in the season.”

While TCU has played seven newcomers as it prepares for the Big 12 schedule, Lipscomb has one of the most experienced teams in the country, returning 92 percent of its offense from a squad that scored 82 points per game last season. The Bisons started three seniors and two juniors.

“Moments like this is where you may see that,” Alexander said.

The Bisons trailed 22-8 midway through the first half before a tying 16-2 run that included 10 points in a row. Cooper started the spurt with a layup and 3-pointer. TCU had a 30-29 halftime lead only after Robinson hit an off-balance 3 from the top of the key to beat the shot clock in the closing seconds of the first half.

Lipscomb: Going into the game, the Bisons had 6,385 career points on their active roster, the most in the country. The second-most: Big 12 team Kansas State with 4,929.

TCU: Point guard Jaylen Fisher played his first game since January. He made his season debut after recovering from arthroscopic surgery on his right knee. He missed his only shot and had two fouls while playing just seven minutes before halftime. Noi also played his first game after being sidelined because of a right knee issue.

“Once we got down there and got into a one-possession game, they simply just went at us inside, bigs as well as their guards, and almost overpowered us,” Dixon said. “I was surprised with how physical they were compared to us, and we simply got what we deserved.”

Lipscomb outscored TCU 42-26 in the paint.

Lipscomb beat SMU 79-73 only three days earlier, a trip that started after a home loss to rival Belmont last Thursday.

“We turned around two days later, after a hard day’s travel, commercial, not charter now, and then get this trip like we did,” Alexander said. “It says a lot about our team.”

TCU gets a break for Thanksgiving before resuming a six-game homestand to start the season. The Frogs play Eastern Michigan on Monday night.