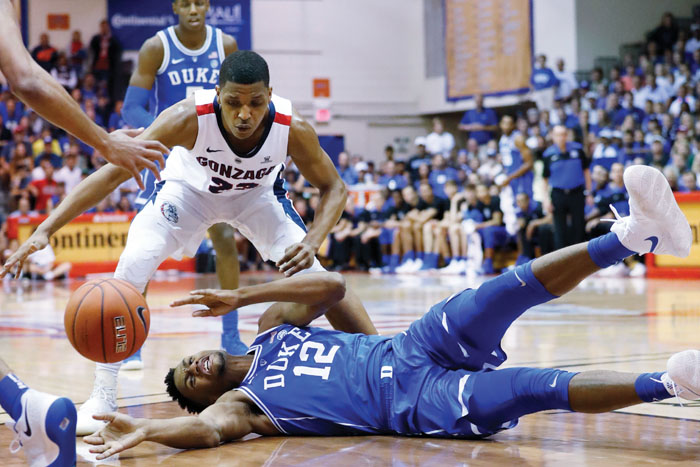 Duke forward Javin DeLaurier (12) loses the ball while being guarded by Gonzaga guard Zach Norvell Jr. (23) during the first half of an NCAA college basketball game at the Maui Invitational, Wednesday, Nov. 21, 2018, in Lahaina, Hawaii. (AP Photo/Marco Garcia)

LAHAINA, Hawaii (AP) — Gonzaga found itself in the same position as Duke’s first five opponents: appearing helpless as the Blue Devils and their rim-rattling freshmen ran past and flew over them.

The Zags never panicked, never looked up in awe at the bouncy Blue Devils. They have too much experience to get rattled, even against college basketball’s most talked-about team.

Playing with poise and grit down the stretch, No. 3 Gonzaga turned back top-ranked Duke’s late-game charge to win the Maui Invitational title game 89-97 on Wednesday.

“Experience plays a big role in this,” said Gonzaga guard Zach Norvell Jr., who had 18 points. “We came down the stretch and got some stops. We knew we were winning it on the defensive end.”

Gonzaga (6-0) put on an offensive show in the first half and battened down on defense after Duke made a second-half charge, blocking four shots in the final 46 seconds to win its second Maui title.

Rui Hachimura scored 20 points and the Zags beat a No. 1 team for the first time while ending the Blue Devils’ unbeaten streak on the Valley Isle (17-1).

Dubbed a Final Four contender when Killie Tillie returns, Gonzaga already looks like one — even with one of their best players on the bench in a walking boot.

“The lights were on us tonight and we played good, which you have to against Duke,” Gonzaga coach Mark Few said. “You have to pretty much play great. I thought we played great.”

Five-time Maui champion Duke (5-1) made it look easy the season’s first five games, its fantastic freshmen soaring through the spotlight, not cowering away from it while looking all but unbeatable.

The experienced Zags gave them a lesson in ball movement, orchestrating a master class in free-flowing, position-less basketball while building a 14-point first-half lead.

Well, not just yet.

The Blue Devils fell behind by 16 in the second half before firing up the Blue Devil express with a series of head-above-the-rim dunks and drives.

Hachimura put Gonzaga up 89-87 with a strong move at the basket with 75 seconds left, but the Zags kept giving Duke chances by missing four free throws. Clarke clanked two with 30 seconds left and Hachimura came up empty on two more with 10 seconds left.

Gonzaga’s defense made up for it.

Hachimuru and Clarke each had two blocked shots in the final minute, capped by Clarke’s swat of R.J. Barrett’s driving attempt at the buzzer.

A seated Barrett raised his arms, wondering why no foul was called. The Zags leaped in celebration after a game with a Final Four feel packaged in a small-town rec center.

Barrett had 23 points and Zion Williamson scored 22 for the suddenly humbled Blue Devils.

“We finally started to fight in the last 14 minutes, whereas before we had just come to play and we weren’t as emotionally ready as Gonzaga,” said Duke’s Javin DeLaurier, who had six points and six rebounds.

This was the game everyone expected when the Maui Invitational got another marquee title game between the what-will-they-do-next Blue Devils against the electrically efficient Zags.

Duke and its future lottery picks steamrolled San Diego State and outlasted No. 8 Auburn to reach its sixth Maui title game in six years. Gonzaga survived Illinois’ frenetic attack and put on a second-half show to beat Arizona in the semifinals.

The Blue Devils ran roughshod over one top-5 team to open the season, making then-No. 2 Kentucky look like a JV team.

The Zags not only didn’t back down, they threw the first punch.

Forcing Duke defenders through one ball screen after another, Gonzaga played the position-less basketball game better than the Blue Devils. The Zags all but took Duke big man Marques Bolden, who had seven blocked shots in the semifinals, out of the game with their ball movement and created numerous open looks for themselves.

“They were just dictating the flow,” Duke coach Mike Krzyzewski said. “I mean we were not playing good defense, but they were playing great offense.”

When Clarke went to the bench with his fourth foul midway through the second half, Gonzaga went into a stall. Duke put together a run, a sixth Maui title within reach.

The Zags swatted Duke’s bid away.

NEW YORK (AP) — Grant Williams scored 24 points and No. 5 Tennessee had five players In double figures to beat Louisville 92-81 in the first semifinal of the NIT Season Tip-Off on Wednesday night.

Admiral Schofield added 20 points for the Vols (4-0), who shot 54 percent from the field. The win was the 664th of Tennessee coach Rick Barnes’ career. It moved him past John Wooden on the all-time Division I wins list.

“It means I’ve been around a while,” Barnes said.

Trailing 77-70 with 6:51 left, Louisville coach Chris Mack got called for a technical foul when he didn’t like an over-the-back call on Dwayne Sutton. The Cardinals could never recover, trailing by as many as 15.

“I complained during the game, so I’m not going to again complain now,” Mack said. “I thought when Dwayne got the ball it was compleley clean. It’s basketball. I shouldn’t have received the technical. That’s my fault. It’ll be the last one of this year.”

The second game of the doubleheader was No. 2 Kansas against Marquette.

LEXINGTON, Ky. (AP) — Of the areas coach John Calipari can fault with No. 10 Kentucky right now, shooting isn’t one of them after the Wildcats’ best performance this season.

More important was that they were accurate early and consistently against Winthrop.

PJ Washington had 19 points and 11 rebounds, Tyler Herro added 15 points and Kentucky shot a season-best 56 percent to run away from the Eagles 87-74 on Wednesday.

Coming off Sunday’s tense victory over hot-shooting VMI, the Wildcats (4-1) had a far easier time against the Eagles (2-3) as they used their size to control the boards 37-20 and scoring in the paint (42-24). An 11-0 run to start the second half helped build a 68-42 cushion with 12:44 remaining and they were never really threatened, though several lapses allowed Winthrop to mount modest runs.

The Eagles never got closer than 13 in the final minutes as the Wildcats got needed plays at both ends of the floor to stay safely ahead.

“We didn’t end the half well,” Washington said, “and then in the second half we just came out and got stops. That led to fast-break points, some 3s and the intensity was a lot better than how we ended the half. It was great, but we kind of lost it a little bit.”

Washington was the catalyst, making 7 of 11 from the field on the way to his second consecutive double-double. Herro left the game briefly after taking a hard tumble in the first half but returned to make 6 of 14 with three 3-pointers. He also had seven of Kentucky’s season-high 20 assists.

The Wildcats made 31 of 55 from the field, the third consecutive game they’ve shot at least 49 percent. Keldon Johnson added 13 points and seven rebounds, Quade Green had 11 and Nick Richards 10 as Kentucky won its fourth in a row.

“We just started right out of the gate, we were pretty good to get going,” Calipari said. “There are games where we’re not going to be able to just throw it in and jam it in there. But when you have that as an option and you can shoot the ball the way that we do, it becomes tough.”

Josh Ferguson, Charles Falden and Austin Awad each had 11 points, while Kyle Zunic and Adam Pickett added 10 apiece for Winthrop, which lost its second in a row and fell to 0-3 against Kentucky.

Kentucky has another game on Friday night but shouldn’t lose its Top-10 ranking.

Herro went down hard and rolled over in pain as he lay on the court for several minutes before walking off and going to the locker room. The freshman guard returned for the second half and showed no effects, though he was a little nervous when he fell.

“Honestly, I thought I tore something,” said Herro, who previously had surgery for a torn meniscus. “It hurt really bad, but it was just the way I fell. I put some ice on it and I was good.”

Winthrop: Outmatched in size by Kentucky, the Eagles found consolation from behind the arc in shooting 13 of 28 (46 percent) and outscoring the Wildcats’ bench 39-27. They shot 54 percent in the second half with six 3s, their only answer to all that length.

“I tell these guys, they block it with their armpit hairs,” Winthrop coach Pat Kelsey said of trying to penetrate against Kentucky. “Their DNA is to protect the rim, and what we were telling our guys was to spray the ball. You’re not going to finish against trees, against towers in there like that.”

Kentucky: The Wildcats’ perimeter defense still has work to do after Winthrop found long-range success, though it wasn’t like the 19 3s that VMI dropped on them on Sunday. Turnovers were a problem as well, as Winthrop converted 19 miscues into 27 points.

Kentucky hosts Tennessee State on Friday night, looking to go 5-0 against the Tigers.