Big 12 breaks out in NFL, can Saints top LA-KC? 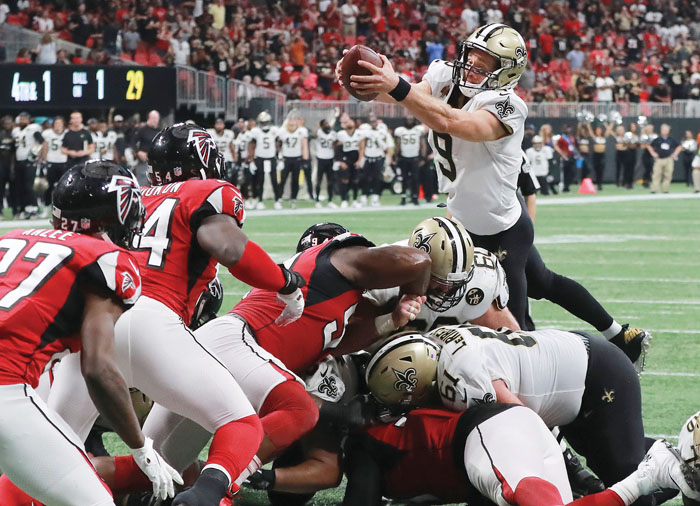 FILE - In this Sept. 23, 2018, file photo, New Orleans Saints quarterback Drew Brees goes over the top for the winning touchdown in overtime to beat the Atlanta Falcons 43-37 in an NFL football game, in Atlanta. As well as Drew Brees and the Saints' offense are playing, the record-setting quarterback says he wouldn't be surprised by a tight, or even low-scoring game against Atlanta on Thursday night. (Curtis Compton/Atlanta Journal-Constitution via AP, File)

Now that we’ve seen Big 12 football break out in the NFL — Rams 54, Chiefs 51 — can we get a college hoops score out of the Saints?

The Who-Dats will be rocking the Superdome on Thanksgiving night, with New Orleans facing its archrival, the Atlanta Falcons. The Saints are running away with the NFC South and the Falcons have faltered badly, but this is almost always a tense, close affair.

Except that the Saints have manhandled opponents this season, outscoring them 378-239 as Drew Brees, well, breezes through the best year of his superb career.

Coach Dan Quinn says the Falcons can win a high-scoring game against the Saints, who won at Atlanta 43-37 in September.

“We are. We’re equipped,” Quinn said. “Certainly when you’re going against another team that’s high scoring, it was no surprise to see that in the first game, either.”

New Orleans, ranked atop the AP Pro32, is a 13-point favorite. At home, that doesn’t seem too charitable.

KNOCKOUT POOL: Arizona flopped like a wanderer in the desert, yet another nasty blow to Pro Picks. If anyone is interested, we’ll try DALLAS this week.

Angry and rested Patriots are not an opponent the Jets want to face.

Winner here has inside track to wild card.

Steelers got lucky in Jacksonville despite poor performance.

Vikings have lost all three prime-timers this season. This won’t be a fourth.

How good has Andrew Luck been in his return from injury?

Two teams coming off ugly collapses. Chargers are better than that.

Eagles are going to get things right eventually, aren’t they?

Lamar Jackson might actually throw a bit more this week.

Biggest question is whether Jags can handle cold temperatures.

Is it Jameis Fitzpatrick or Ryan Winston at QB for Bucs?

Had there been a line, we would have laid the points.

DETROIT (AP) — The Detroit Lions and Chicago Bears will meet for the second time in 12 days — yet this matchup already looks a lot different.

Mitchell Trubisky, Chicago’s starting quarterback, is doubtful for Thursday’s rematch with the Lions because of a right shoulder injury.

That means Chase Daniel, who has barely played in the NFL since 2014, may take the field for the NFC North-leading Bears under the Thanksgiving spotlight.

“We’re on a short week. So regardless, there’s not a lot you can do. The nice thing about having a guy like Chase, regardless of which direction you go, is I was Chase’s quarterback coach in Kansas City for three years,” Bears coach Matt Nagy said.

“So, I know Chase inside out and he knows me. And so, that’s why you bring in a guy like Chase, is not only for his expertise in this offense, but in the way he handles his position each and every week.”

Trubisky threw for 355 yards and three touchdowns in Chicago’s 34-22 win over the Lions on Nov. 11. Now the teams face each other again less than two weeks later. The Bears (7-3) have won four straight.

Detroit (4-6) is in the middle of a three-game homestand that began with a victory over Carolina last weekend, but rookie running back Kerryon Johnson left that game with a knee injury. He won’t play Thursday.

So both teams have health concerns coming into this game — and they haven’t had much time to adjust to any potential lineup changes. The 32-year-old Daniel has started two games in his NFL career, and he hasn’t attempted a pass since the 2016 season.

“The guy is very versed in the system. He’s played in it for a while,” Detroit coach Matt Patricia said. “A little bit different than Trubisky, but as far as the operation of the offense, none of that really will change.”

Here are a few other things to know about Detroit’s matchup with Chicago:

The Lions haven’t had much time to prepare for this game after playing last weekend, but the Bears had even less time to recover, since their Sunday game against Minnesota was at night.

So when Thursday’s game kicks off around 12:30 p.m. local time, Chicago will have had about 3½ days since the end of its previous game.

“Our guys, once we knew it, we prepped them on what our game plan is as far as making sure they’re mentally and physically strong and how they have to treat it,” Nagy said.

“So, it’s a positive to be flexed into a night game like we were last week, but now we have to make sure that we handle our business.”

Only Green Bay has faced the Lions more times on Thanksgiving than the Bears. Chicago and Detroit have split their previous 16 Thanksgiving meetings. The Lions lost to Minnesota last year, ending their four-game winning streak on Thanksgiving.