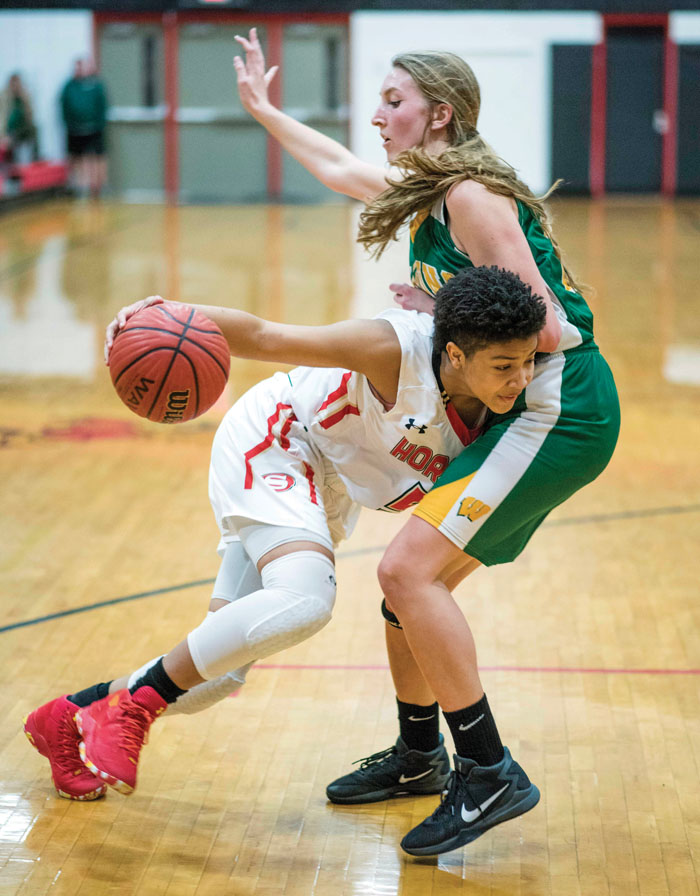 SALISBURY — Ninth on Salisbury’s all-time scoring list with 1,110 points, with her senior basketball season still in front of her, 6-foot-1 Bryanna Troutman was recruited by a long list of schools.

There were several Division I and II schools that she liked, but only one that she loved. That was Wingate University. The Bulldogs landed a potential All-South Atlantic Conference player on Monday when Troutman signed.

“The program, the coaches, the campus, the school,” Troutman said. “I visited a lot of schools, but Wingate is the place where everything felt right.”

Catawba tried hard to get Troutman, who hopes to become a physical therapist. So did Charlotte, High Point, Elon and a host of others. The daughter of an elementary school teacher, Troutman made herself highly recruitable with her effort in the classroom.

“I think everyone knows she’s a great athlete, but she’s also a great student-athlete,” Salisbury head coach Lakai Brice said. “She’s taken care of business off the court, as well as on the court. She’s a strong enough student (3.8 GPA) that she’d be going to college on an academic scholarship even if she wasn’t an athlete.”

As an athlete, she’s an intriguing player with a very high ceiling because most 6-1 high school girls are confined to rebounding and scoring in the paint.

They don’t have ball-handling and passing skills. Troutman does.

They don’t have shooting range. Troutman does.

She’s not a great 3-point shooter yet, but her form looks good and she’s a threat. She’ll probably shoot a solid 35-40 percent on 3s as a senior.

“I really don’t like the post, but my team has needed me to play in the post a lot,” Troutman said. “I’m sure I’ll be more of a wing player in college.”

Passing might be what she does better than anything.  She sees the floor and can throw the ball over smaller defenders. That’s really going to show up on the college level when she’s playing with more finishers. Wingate generally has one of the better teams in the SAC.

“She can play four positions,” Brice said. “She’s a special athlete, a game-changer. She was a program-turner for us. I’m sure that when she finishes, she’ll be looked at as one of the best ever at Salisbury.”

This will be Brice’s sixth year at the helm of the Hornets, Salisbury was 12-36 in her first two seasons. Troutman arrived from Knox Middle School prior to the 2015-16 season. Salisbury is 54-21 since then, and 40-9 the last two seasons.

Troutman has averaged a double-double over the course of her 74-game career. As a junior, she attacked all the statistical categories, including the defensive ones, averaging 15.9 points, 11.0 rebounds, 4.6 steals, 3.6 assists and 2.7 blocks.

Salisbury probably would have won a few more games last season, but Troutman was injured in a Central Carolina Conference Tournament loss to Lexington, and then missed the first-round playoff game with North Surry.

Troutman said winning the 2016 Christmas tournament championship game against Carson is her career highlight so far. An individual highlight came last January when she surpassed 1,000 career points at home in a win against Lexington.

Troutman has scored in double figures 64 times and has topped 20 points nine times. Her career high is 24.

“She could have scored more, could have dominated more games, but that’s not her,” Brice said. “She’s always been a great teammate. She’s unselfish. She wants to make sure her teammates are involved.”

Troutman figures to even better as a senior.

“The biggest difference is I’m a lot stronger from being in the weight room more,” she said. “Strength helps your game in all areas.”

More strength should mean more three-point plays, more finishes when she’s being pounded by double-teaming defenders in the lane. She also figures to shoot more accurately on free throws. She was at 57 percent last season, and she gets fouled a lot.

With standout guard Anayia Fulson (650 career points) back for her junior season, Troutman predicted this will be the best Salisbury team she’s played on.

“I’ve talked to Bryanna about checking off three boxes,” Brice said. “The first one was 1,000 points as a junior. The second one she checked today when she signed a National Letter of Intent. The last one I want to se her check is winning a state championship.”