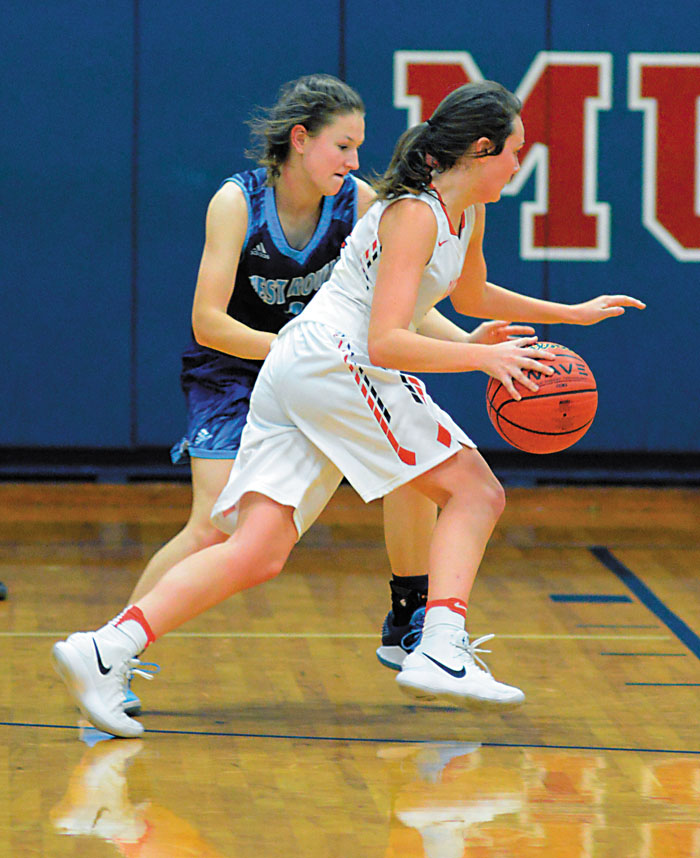 GRANITE QUARRY — No one is looking forward to a fresh basketball season more than East Rowan girls coach Kevin Holland.

The Mustangs were 4-20 and 5-20 in his first two seasons with shallow rosters that were further depleted by injuries.

For the first time, Holland has a full roster of 12. It’s no coincidence that the Mustangs opened the season at home on Tuesday with an easy 47-23 win against Central Davidson.

“It feels great to be 1-0,” Holland said. “The biggest part of having a full roster is just being able to practice. We’re able to do a lot more things.”

East got four 3-pointers from Grace Eagle, who also went 3-for-4 at the foul line and scored a career-high 17 points. Brooke Mitchell, who scored in double digits a couple of times last season, scored 10.

“Brooke was trying to get to the rim and was a lot more aggressive than last season,” Holland said. “It was great to see.”

East took a 16-5 lead after a quarter and was up 26-9 at halftime against the 2A Spartans.

“Right out of the gate, we came out really strong,” Holland said. “We had good energy and excitement. We pressed some, and we were bothering them.”

East wasn’t seriously challenged in the second half.

“We didn’t play as well as we did at the start —  we stumbled a few times,” Holland said. “But we recovered.”

East is still young, with five players who are freshmen or sophomores. Freshman Mary Spry only scored two points, but she made an impact defensively and on the boards.

“That will be a lot different pace than tonight’s game,” Holland said. “South lost some good players, but they’ve still got Janiya Downs. She’s one of the smoothest players I’ve seen in this area.”