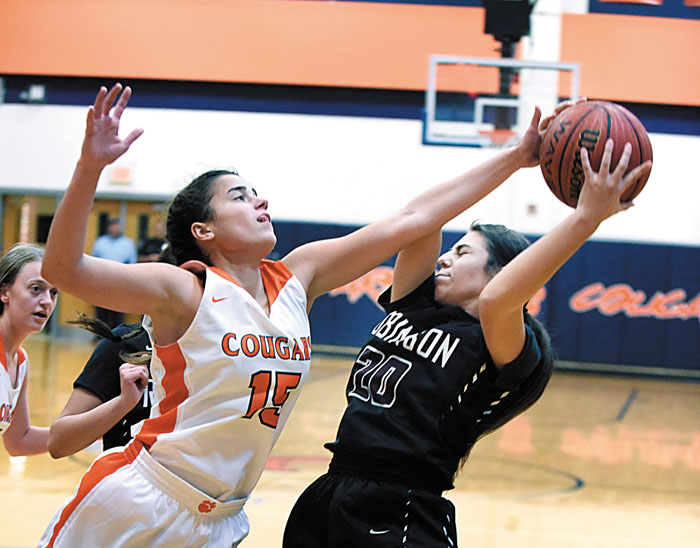 CHINA GROVE — Carson’s girls started fast, finished fast and were pretty good in between in a 78-26 romp against Robinson to kick off the basketball season.

“Robinson has a lot of new faces and not much experience,” Carson coach Brooke Stouder said.

Carson, on the other hand, brings a lot of talented people back from a 25-4 team, including Anderson University signee McKenzie Gadson, a 1,000-point scorer. She produced 22 points, grabbing seven offensive rebounds and going 6-for-8 from the foul line.

“McKenzie made mid-range shots and did a good job of attacking,” Stouder said. “We rebounded the ball well and we were able to get out and go. We’re so much better when we can do that.”

All nine healthy Cougars played and scored. Ellie Wilhelm, one of Carson’s better shooters, is out with a sprained ankle.

Carson had the game well in hand after a quarter, leading 22-7.

Robinson scored only six points in the second half. A running clock kicked in after the Cougars led by 40.

“We backed up our defense to halfcourt after the first quarter, but we still played some solid defense, with a lot of steals and not many fouls,” Stouder said. “Everyone contributed.”

Colbie Perry made three 3-pointers, scored 11 and had four steals and four assists.

Carleigh Perry, who missed almost all of last season with a knee injury, scored nine points, as did varsity newcomer Victoria Post.

“Carleigh gives us some grit, some toughness,” Stouder said.

Despite a lot of points, Carson didn’t shoot especially well from long range, going 7-for-29 on 3-pointers.

“We do expect to shoot better than that, but we were able to make up for it with 9-for-11 free-throw shooting and almost 50-percent shooting on 2s,” Stouder said. “We got a lot of opportunities close to the basket.”

Carson’s next game will be tougher, on Saturday against Carmel Christian from Matthews. That game is part of the Headliners Challenge and will be played on a neutral court at Glenn High in Kernersville at 10 a.m.

“Playing at 10 a.m. the Saturday after Thanksgiving,  I have no idea what to expect,” Stouder said. “It will be interesting.”