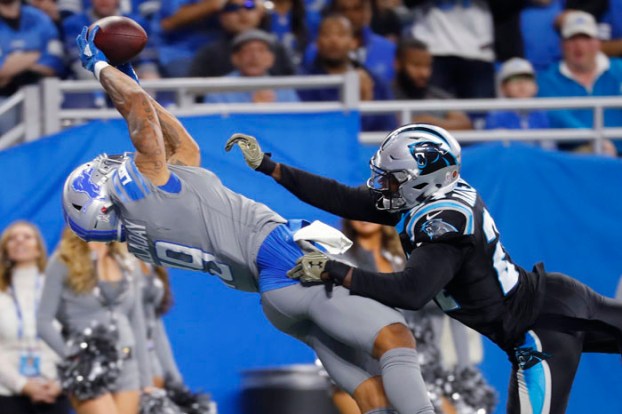 DETROIT (AP) — Cam Newton took a shotgun snap and set up in a clean pocket, surveying the field from sideline to sideline. The star quarterback had time and an open receiver in the end zone, giving the Carolina Panthers a chance to convert a go-ahead, 2-point conversion against the Detroit Lions.
Newton, though, wasted the opportunity by sliding to his left and sailing an off-balance throw behind and over Jarius Wright.
Instead of earning a comeback win to bolster playoff hopes, Newton’s errant pass with 1:07 left allowed Detroit to hold on for a 20-19 win over Carolina on Sunday.
“I let this team down and I’ve just got to be better,” Newton said.
Carolina coach Ron Rivera went for the win after Newton threw his third touchdown pass to rookie receiver DJ Moore , who leaped in the corner of the end zone to make the catch.
“I think you go for 2 on the road,” Rivera said.
Rivera would not budge on the reasoning behind the aggressive call when pressed whether he made it because usually reliable kicker Graham Gano missed an extra point and a field goal earlier.
“I was going for the win,” he said. “That’s the bottom line.”
Newton’s line looked good, going 25 of 37 for 357 yards with three touchdowns and an interception. But with a chance to help the Panthers (6-4) avoid losing two straight for the first time this season and at least improve their wild-card positioning, Newton failed to deliver a relatively simple pass in a pressure-packed situation.
“This game is such a humbling game at times,” he said. “Today, I was humbled.”
Detroit coach Matt Patricia insisted he wasn’t surprised by Rivera’s decision.
“They had good momentum going into that situation,” Patricia said.
The Lions (4-6) recovered an onside kick to seal the victory and end a season-high three-game losing streak. They were in a position to win after Matthew Stafford threw a go-ahead, 19-yard touchdown pass to Kenny Golladay with 5:19 left. Stafford rolled to his right and threw toward the end zone, connecting with Golladay, who leaped just inside the 5 and landed in the end zone with a score that stood after review.
“He just gave me a nice, pretty, high ball,” Golladay said. “I like balls like that for me to just use my size, hands, athletic ability to go up there and make the catch.”
Stafford was 23 of 37 for 220 yards with a touchdown. Golladay had eight catches for 113 yards and his go-ahead touchdown help keep Detroit’s fading hopes of saving its season alive.
“We’re playing for everything,” linebacker Jarrad Davis said. “We went down so many games, we know we can’t lose another one, so it’s do or die at this point.”

PIVOTAL PLAY
Moore turned a short pass into an 82-yard gain in the third quarter and would have scored if Darius Slay didn’t tackle him at the 12. Slay was on the opposite side of the field when Moore made his catch, and the cornerback chased down the speedy receiver from behind.
“That’s a huge play,” Patricia said. “Great hustle.”
Four plays later, Gano hit the left upright on a 34-yard field goal after making 28 straight for the longest active streak in the NFL. Gano also missed an extra point in the fourth period, leaving Carolina in a 13-13 tie and leading to its decision to go for the 2-point conversion.
“This is a really tough game to swallow because I could have helped us get a win,” Gano said. “But I can’t try to tear my technique down and start over.”

SILVER LINING
Moore, a first-round pick, made the most of his opportunities to play more without injured receiver Torrey Smith in the lineup. Moore had seven receptions for 157 yards — both season highs — and the score that pulled the Panthers within a point late in the game.

INJURY REPORT
Panthers: Newton left the game briefly in the third quarter with an apparent ankle injury. CB Donte Jackson went out in the second quarter with what looked like an ankle injury, but returned.
Lions: Detroit rookie RB Kerryon Johnson left in the third with a left knee injury and didn’t return after running for 87 yards and a touchdown on 15 carries. Patricia said he didn’t have an update on Johnson’s condition.
UP NEXT
Panthers: Host Seattle on Sunday.
Lions: Host Chicago on Thursday.

JACKSONVILLE, Fla. (AP) — Ben Roethlisberger was far from perfect until the fourth quarter, and that was all that mattered... read more