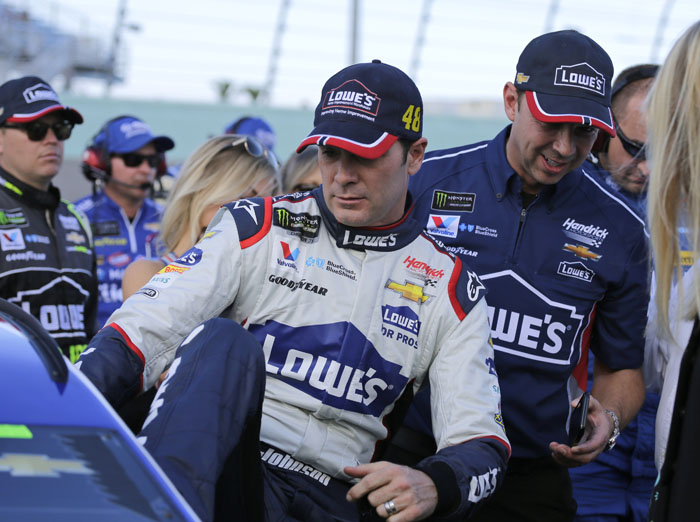 HOMESTEAD, Fla. (AP) — Jimmie Johnson walked into a Hendrick Motorsports family reunion on pit road. Hall of Fame driver Jeff Gordon chatted near the No. 48 car while Johnson’s wife cradled crew chief Chad Knaus’ baby boy.
They needed baby wipes as much a checkered flag.
“It’s all about this moment right now,” Gordon said.
Brooke Knaus kissed her husband, and team owner Rick Hendrick stopped by to give good-luck hugs before he checked in on his other cars. The Johnsons and Knauses posed for family snapshots, and security held off scores of well-wishers wanting to sneak a closer look.
The NASCAR season finale at Homestead-Miami Speedway has featured goodbyes in recent years, with stars like Gordon, Tony Stewart and Dale Earnhardt Jr. leaving the series. This moment had the feel of a retirement party for Johnson — but it was just the swan song for the one of the most dominant driver-crew chief pairings in NASCAR history.
Johnson and Knaus have parted ways after 17 years, seven NASCAR championships, and an unmatched mark of success in the sport over the last 20 years.
They couldn’t grasp greatness one more time, finishing 14th in the finale and going winless in a season for the first time in Johnson’s Cup career. They hugged on pit road and toasted to their tenures with beers before they officially put their partnership on ice.
“He is my brother, there is just no way around it,” Johnson said.
Johnson turned the farewell weekend into a throwback party that celebrated his earlier years. The 43-year-old Johnson stunned the sport when he showed up at the track without his salt-and-pepper facial hair for the first time in nearly a dozen years. Johnson tweeted a photo of a razor with the caption, “I’m all in for the throwback weekend!” Johnson, a fitness freak, looked about as baby-faced as he did as a rookie in 2002. NASCAR poked fun at Johnson’s retro look with a tweet that said, “2002 called, it wants its look back.” Johnson’s former look still was stamped on his official emoji on his Twitter feed.
He was clean shaven — and ready for a clean break from Knaus.
The two are still close friends but there were no signs of tears or tissues as they talked shop for the last time as a team. Johnson slid into the Chevy — sporting a vintage Lowe’s paint scheme — and adjusted his helmet. Knaus took a knee by the car window on the grid and flipped through pages of the playbook that hid the secrets of their race strategy. Knaus smacked the top of Johnson’s helmet as he walked off to the pit stall.
But the sights and sounds of a reason for their breakup enveloped the track: UFC ring announcer Bruce Buffer bellowed the race introductions for the four championship drivers. Defending series champion Martin Truex Jr. waved to the crowd on a parade lap as Knaus dabbed drool from son Kip’s chin.
Once the most feared team in NASCAR, the 48 made a sudden dip into oblivion. Johnson’s 17th season has been his worst and he was knocked out of the playoffs in the first round, ending his run at a NASCAR-record eighth Cup championship. He hasn’t won since Dover 2017, an unthinkable string of 59 straight losses.
Sponsor Lowe’s also is leaving NASCAR. Johnson will be funded by Ally Financial Inc. for all 38 races in the next two NASCAR seasons, the remaining years on Johnson’s contract. Ally ensures that Johnson will have just one look in what is probably his final two years chasing sole ownership of the championship record.
“We can’t wait to see you rocking a No. 48 Ally car on the tracks in 2019,” the financial company tweeted.
Johnson wore an old-school Lowe’s hat from 2002.
“We can’t say enough good things about our #lowes48 guys and everyone at HMS. It’s been an incredible ride,” Lowe’s Racing tweeted.
Johnson, Knaus and 17 crew members lined the 48 for a final team photo before the farewell race.
“A bitter sweet day to say the least,” Johnson tweeted. “@loweshomeimprovement took a chance on me and the 48 team back in 2002… thank you for making this kids racing dreams come true.”
Johnson will try and rebound in Daytona with new crew chief Kevin Meendering. Knaus, a Hendrick lifer, will call the shots for William Byron and the No. 24 team next season.
“I’ve got a lot of work to do with my new team, we’ve got a lot of work to do with this new package and we’ve got to come out stronger,” Johnson said.
But as much as the pomp marked the end of an era, Johnson isn’t going anywhere. Johnson, married and with two young daughters, is still driven to top Richard Petty and Dale Earnhardt and stand alone as NASCAR’s greatest champion.
He may get No. 8 — just without Knaus.