She ditched cheerleading to join the football team, then scored a record-setting TD 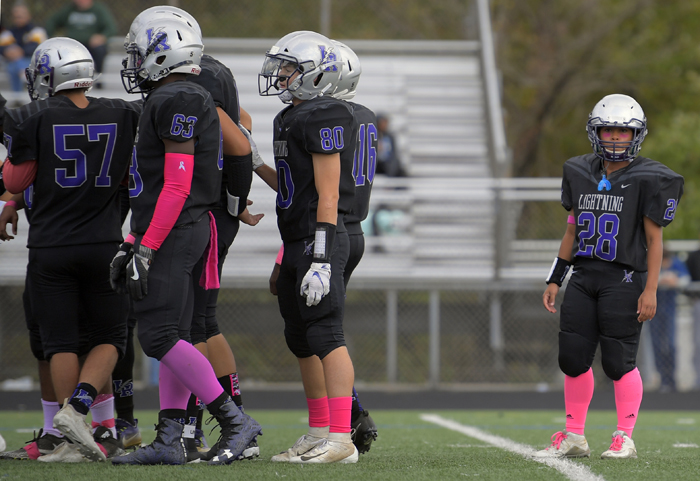 Mimi Britt has carried the ball 15 times across three games this season, including one touchdown. John McDonnell/Washington Post

Among the jocks at this pregame meal for the varsity football team was 5-foot, 130-pound Mimi Britt, who cracked jokes and debated the NBA’s best point guards with her teammates over breakfast. While most Long Reach players wore black sweats and sandals, Britt dressed more formally in a light gray sweater, dark gray leggings and black Air Jordan sneakers.

The junior hadn’t wanted to run for homecoming queen, but she has become an inspiration at the Columbia, Maryland, school, so her peers voted for her anyway.

This season, Britt, 16, became the first girl to score a touchdown in Howard County high school football history, running for a 5-yard score in a win over Centennial. She is representative of the recent increase in girls joining football teams as position players. While many girls have been kickers or punters for high school teams since Title IX’s enactment in 1972, only in the past decade has there been an uptick in players such as Britt trying out at running back, defensive back or even linebacker.

Before the season, Britt tried out for cheerleading at the same time as football, but she quit after two days. She decided it would be too painful to cheer for the team when she would rather be playing. So instead of being down the hall with the rest of the Long Reach cheerleaders in the school’s auxiliary gym, preparing makeup and field decorations for that afternoon’s homecoming game, Britt was savoring the pregame process she had dreamed of as a child: eating a team meal, putting on her pads and eye black, and running through plays with her fellow running backs one final time as fans in the bleachers cheer and ring cowbells.

It isn’t a typical routine for most girls, but it has become the norm for Britt.

“We treat her as a part of the family,” Long Reach running back Nick Phillips said. “Like, that’s my bro. … Well, not bro, but that’s my sister. Anything that happens to her, I have her back.”

Long Reach assistant coach Jimmy Thimote spread out six disc cones across the Lightning’s sideline, placed his hands on his knees and observed as Britt sprinted toward a pair of cones, slowed down and juked to her left.

“Come back, Mimi,” Thimote yelled after Britt’s attempt during the late September practice. “You’re going to be a target now.”

The previous week, Britt had scored her precedent-setting touchdown (some believe it’s the first by a girl in all of Maryland, but the state’s governing athletic body says it doesn’t keep gender-specific statistics). As the running back’s name spread across local high schools, Thimote feared teams would hit Britt harder, so he made Britt redo her sets until she readied her body for a tackle.

“With all the things that are going on in the world of football now because of the violence and the concussions,” Long Reach coach Jamie Willis said, “I just didn’t want her to get hurt under our watch and people start saying: ‘You let her out there. You set her up.’ ”

Britt loves the physicality of football. It reminds her of fights with her two older stepbrothers. So she began playing flag football when she was 6. Her coaches placed her at running back because of her speed.

“Not to brag or anything, but I was like the star of the team,” Britt says now. “All I would hear is people calling my name.”

While Britt’s mother, Karen Paredes, didn’t allow Britt to play tackle football as a child, she couldn’t stop her daughter when she got to Long Reach.

When she tried out for junior varsity in her freshman year, Britt’s teammates told her they were going to crush her. But during the team’s first practice with pads, Britt earned their respect by jumping up after each tackle.

“The more people told me I couldn’t do it,” Britt said, “the more it made me want to.”

Playing in pads from a local recreation league, Britt saw action in two games during her freshman year while spending hours after practice perfecting her cuts.

Britt didn’t participate in her sophomore season because she broke her left leg while running track. This year, Britt had to prove she could face varsity players, some of whom will play in Division I.

During a Long Reach scrimmage in August, Britt sprinted through the wrong hole on one play. She then asked to run the same play again, this time rushing for 8 yards.

“Still now, (some players) are nervous to hit me because … honestly, I don’t know,” Britt said. “I tell them, ‘Don’t go easy on me. That’s definitely not what I want. If anything, go your hardest.’ ”

Britt has taken 15 carries over the course of three games this season. Paredes supports Britt’s passion for football, but while she didn’t struggle to watch her two stepsons play, she worries teams will hit her daughter with more force.

“My heart drops each time they tackle her,” Paredes said.

In the spring of 2014, Shelby Osborne searched online to find email addresses for every NCAA Division II and III and National Association of Intercollegiate Athletics (NAIA) football coach. After appearing in half of Jeffersonville (Indiana) High’s games during her senior season, the 5-foot-6, 135-pound defensive back was determined to play college football, even though she knew Division I wouldn’t be a possibility.

While some coaches responded, most backed away after learning Osborne was a girl. NAIA Campbellsville University in Kentucky was the only school to accept Osborne, who became the first female position player to attend a four-year college.

It was a major moment in the acceptance of women as position players, and Osborne was soon followed by Antoinette Harris, a 5-foot-7 safety who signed with NAIA Bethany College in Kansas this year.

But the options for girls and women who want to play tackle football beyond high school are limited. Most college coaches, even at the lower levels, recruit position players by height, weight and strength measures that are difficult for female high school players to meet, and there are very few colleges that offer tackle football at the intramural or club levels. There are three professional full-contact, 11-on-11 U.S. women’s football leagues, but the organizations don’t offer salaries.

This hasn’t dissuaded some girls from playing tackle football for their high schools, however. In 2017, 16 girls among 12 schools played in Maryland, and 48 girls participated across 30 schools in Virginia, according to a National Federation of State High School Associations survey.

Britt isn’t a starter for Long Reach but has received playing time when Long Reach has built large leads. Woodbridge High’s Madison Kinney plays wide receiver and linebacker for her Woodbridge, Virginia, junior varsity team. Kinney, who moved to Virginia in June, says she is thankful for the opportunity, given that her school in Orlando didn’t allow girls to play tackle football.

“For most people, a lot of this is just outside of what they’re used to, so it makes them uncomfortable,” said Donna Wilkinson, a former Women’s Football Alliance running back. “Men have attached football and the ability to play it to the final masculine frontier.”

As the fourth quarter of Long Reach’s 41-0 homecoming win over Mount Hebron began, Long Reach’s students erupted in a chant of “We want Mimi!”

Britt, who says she was bullied in middle school for playing football, has been treated like a celebrity in Long Reach’s hallways since her touchdown run. Willis, her coach, said more girls have expressed interest in trying out because of her. Sometimes random people ask Britt to take photos with her.

She says her ultimate aspiration is to be the first woman to play in the NFL, but if she isn’t able to, she hopes to form a women’s football league that mimics the NFL’s rules and exposure.

Britt entered the homecoming game, and as the game clock expired on Britt’s third carry, a Mount Hebron defender tackled Britt and flexed his muscles toward Long Reach’s student section. A Vikings player called Britt pretty during the postgame handshake line. Britt has become accustomed to such taunts.

“If he posts that as a highlight,” a Long Reach player joked about the tackler, “we’re fighting him.”

Some girls always keep their helmets on to avoid being singled out, but Britt removed hers and exposed her black ponytail during the coaches’ postgame speech. Long Reach coaches address the players as “gentlemen,” and accepting that is one way Britt has adapted to play the sport she loves.

Family members and friends stopped Britt after the game to congratulate her and request photos, so Britt was the last Long Reach player to enter the school.

As she continued to banter with her teammates about their victory in the hallway, Britt strolled past the boys’ locker room and entered the girls’ room about 10 feet down the hall. For the first time that day, Britt was separated from her teammates.

“We all care and love each other so much,” Britt said. “It’s a great feeling because I’m a part of it, too, and I can tell they accept me just as they would for anybody else.”