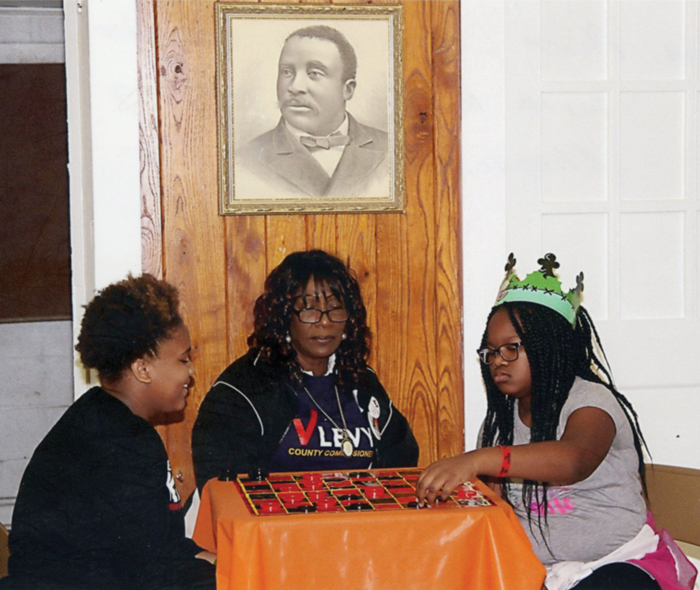 At the November 20 meeting, member Steve Martin will provide information about the development of the lathe from the earliest lathe we can document during the Egyptian era through the 19th Century. There will be an opportunity for attendees to try their hand.

Approximately 65 children, youth, parents, adults, Legionnaires and Auxiliary members attended the first Fall Festival sponsored by J.C. Price American Legion Post 107 and Auxiliary on Nov. 3 at the Post Home.
Kathy Scott, Auxiliary co-chairman of the Children and Youth Committee, spearheaded the program and stated that the theme of the décor simulated an actual fall festival with real haystacks, scarecrows, unshucked corn, chrysanthemums, lighted pumpkins, popcorn machines and lanterns, with orange tablecloths adorning the tables in the auditorium.
On the outside midway, The Thelma Smith Foundation sponsored a booth featuring Melissa Summers and Melissa Gladden who provided candy, pamphlets and goodies for the children. They also painted the children’s faces in a Post Halloween or festive style. They also distributed clothing and provided games for the youth.
In addition, A.J. Alexander, Auxiliary president, entertained the children on the midway with bottle tosses and other games. Co-chair Leonard Hall and John Pharr entertained the children with old-fashioned horseshoes, basketball and other games.
In the auditorium, Auxiliary members Kathy Scott, Dianne Alexander, Cynthia Pharr, Brenda Avery, Renita Craig and La Quinta Alexander entertained the children with bingo, checkers, chess, tosses, bowling, a cake walk, “Can You Name That thing with your eyes closed” and “count the candies in the jars.” Each winner received a prize and a royal king or queen’s crown. Popcorn, hot dogs, chicken nuggets, tenders, pizza, potato chips, French fries, yogurt, water and cold drinks were served to children and parents. Music was played by Commander Carroll and children danced and sang their favorite tunes. Before leaving, each child received a bag filled with books, goodies and toys.
Bill Ragsdale, a local magician and ventriloquist, mystified the audience with magic tricks, utilizing children from the audience as his assistants: Nevaek Taylor and Sunshine Bowman. He and his assistants performed many tricks and taught the audience some of the easy tricks that they could do to fool their schoolmates. He also performed ventriloquist tricks with his puppet. At the end of the program ,each child was given a flyer on “How to do Simple Tricks.”