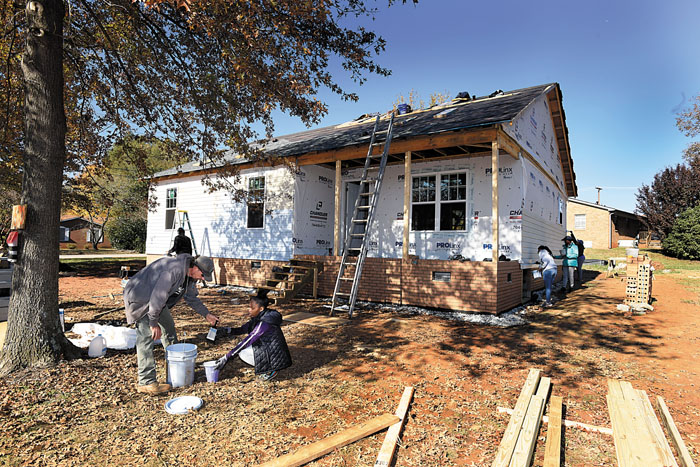 This year, the two colleges have come together to work on building two houses in that neighborhood.

“We’ve worked with both schools for years now, but never with them partnering with each other,” said David Rowh, the construction supervisor for Habitat for Humanity of Rowan County. “We thought that was a really neat idea when that was first brought up this summer and it’s been neat to see it actually happen.”

Payton Coleman, a senior and Student Government Association president at Catawba College, came out last weekend for the first time and returned for the “Girl Power” day, which encourages women to volunteer for Habitat for Humanity.

“It was really, really great to be able to collaborate,” Coleman said. “It was one of the most effective times that Livingstone and Catawba has been really been able to get together and have a good time and also serve our community.”

Rowh said the students have come together to build the home.

“Some days it’s been if they’re not wearing shirts with their respective schools on it I couldn’t tell which kids are from which schools, because they’re all intermingled, they’re all talking and having a good time,” he said.

“It’s cool to see the schools in the community coming together to do one thing and that’s really the goal,” Denton said. “It doesn’t matter who’s out here doing it as long as it’s getting done. Truth be told.”

Denton said she enjoyed helping build the home, particularly because she was homeless before.

Rowh said anyone can volunteer and he hopes with the Girl Power day more people realize they can help build homes.

“We don’t want to see any difference in any volunteer that walks onto our site,” Rowh said. “No labels at all. Not just gender but age, skin color. None of that matters. We want to have volunteers. It’s true. You see it happen with this wall. Once they started working on what they’re working on after a few minutes, all they know about the person to their left or right is that it’s the people they’re working with. They don’t think about anything else. They just think about what they’re doing. They’re putting siding on the house.”

For those interesting in volunteering, visit habitatrowan.org.

Bringing a piece of Tennessee back: Salisbury native opens…