I could tell you about the statistics of pancreatic cancer. That out of 55,000 people who are diagnosed every year, fewer than 10 percent are eligible for surgery. And only about one-third survive five years beyond diagnosis.

I know these statistics because Patsy Reynolds pointed them out to me, six months after her diagnosis.

Patsy, 71, is facing her own mortality. You know what? She is unafraid to die. The reason is simple. Because it doesn’t come close to what’s already happened to her.

“This is not the worst thing,” she says.

The worst thing was when her son, JohnO, died on June 11, 1989. He was killed in a crash on his way to the beach with after his first year at Davidson College. 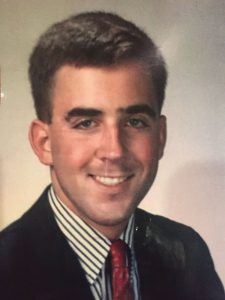 That experience, she says, “causes you to look at death the way I do, which is fearlessly. From the moment he died, the fear of death did not exist. The saddest thing is for my family to be left without a grandmother, mom, and wife.”

Therefore, she says, “You have to focus on the positive, and you have to live your life.”

Which is what she’s been doing since March.

When Steve and Lori Yang lost son Michael in 2001 just before his second birthday, Patsy immediately went to see them. She took Lori a cloisonné butterfly pin, which she hoped would be a symbol of comfort to the young mother. Lori sent it back recently.

“It was sweet, that reconnection,” Patsy says.

These last six months, she’s made many connections and reconnections.

“My hope is that pancreatic cancer will not take me, but be an interesting chapter in my life,” Patsy says.

In a way, the hardest part was in mid-September, when Patsy and her husband, Ozzie, waited to learn whether she was a candidate for surgery. She’d had chemo and radiation to increase her chances for success. Earlier in the summer, she told me, she didn’t want to be blindsided. If surgery wasn’t an option, she and Ozzie would hit the road, checking boxes off her bucket list.

In late August, Patsy and Ozzie, her husband of 50 years, found that treatment had indeed been successful. Then came an unexpected turn of events.

They met with the surgeon to pick out a date for surgery. But a recent scan revealed what they thought was a mass, but turned out to be a cyst on her intestine. Still, the surgeon refused to operate.

“That was an emotional time,” Patsy says. “We were crushed.”

By mid-September, the cyst was gone and surgery was a go.

On Sept. 6, Patsy finished treatment. On Oct. 8, she began five weeks of a less intensive chemo and radiation, five days a week, to make sure things remained in check. They have, and Patsy is scheduled for surgery on Nov. 27, the Tuesday after Thanksgiving.

Patsy and Ozzie will head to the mountains with son Chance’s family this week, which includes her three “fabulous grandchildren.”

After that, she’ll face the long surgery, with a minimum of eight days in Baptist Hospital, followed by a long recuperation period at home. 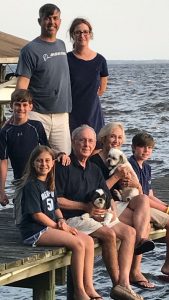 Patsy, Ozzie, and son Chance and his family

That recuperation will be made easier with the help of friends Margaret Kluttz and Meg Dees. Meg and JohnO were the best of friends, Patsy says. “We are honored to be part of the Kluttz clan.”

The mother and daughter team came over to clean out Patsy’s downstairs office, the spot where she will spend time recovering from the arduous surgery.

“They are so proactive,” Patsy says of the two. “They spent an entire day doing yeoman’s labor. They made me donate and get rid of stuff and delivered it where it needed to be.”

The notebooks and files on every student showed how personalized her Latin tutoring was, Margaret says. “This office was a microcosm of her life. It just seemed like the right thing to do. We wanted to help do something at a time when a special person we love was overwhelmed.”

Next Tuesday, Patsy will undergo what’s called the Whipple procedure. Also known as a pancreaticoduodenectomy — the complex, eight-hour surgery will remove the head of the pancreas, the first part of the small intestine, the gall bladder, and the bile duct.

It’s described as a difficult and demanding surgery, and carries serious risks. But it’s Patsy’s only chance for a cure.

“The thing I have to resolve in my mind is that this is the cure — and it’s the only path,” she says. “If there’s anything difficult in life, you just do what you need to do. It doesn’t help if you don’t have a good attitude. It just makes you unhappy. I’m not afraid of death. My regret is if I die is the sadness it’s going to create. I’m not sad for me. I’m sad for the effects it will cause. I don’t know my fate — but then again, who does?”

Patsy is thankful that Ozzie retired from his ophthalmology nearly two years ago.

“We’ve had total togetherness,” she says, “no young children or jobs, except this job of fighting cancer. We are so lucky we can focus.”

Just as the community held them up when JohnO died, they hold them up now. Ozzie sends out a weekly email when there’s news to share. He forgets not everyone has a medical degree, but those who receive it are thankful for the mostly good news that’s been disseminated.

During the harder course of treatment early on, Patsy, an extrovert, found it hard to hang out on the sofa. But she read many books — a great treat — and worked crossword puzzles. Once she began to feel better, she kept up her bridge tournament schedule. She is a Regional Master, and her goal is to be a Life Master.

To be sure, Patsy does have a positive attitude. Another point in her favor is the great physical shape she’s in. Until her diagnosis, she worked out five mornings a week at the Y. She’s a part of Ester Marsh’s “Estalatte” class.

After the Y, she’d hit College Barbecue for a cup of coffee. They were the first people who sent flowers.

“I just can’t tell you the dearness of people,” says Patsy, who taught Latin at Catawba College and Salisbury High School, where she was also a tennis coach and swim coach.

She coached Robert Basinger, now a dermatology physician assistant in New York City. He recently wrote her a long note, one of hundreds of cards she’s received.

“Sometimes in life, we are touched by people without them ever realizing it, in the simplest but most profound ways,” he wrote. “When I think of you, I see your face at the check-in desk at the Salisbury Country Club at one of your countless junior tennis tournaments. You always greeted me with a smile and hug, and your infectious laugh. Those were the smallest of gestures, but so important to me, at that time, and now, some 25 years later.

“In my mind, I will always see you there, smiling, welcoming everyone and sharing your warmth.”

Patsy remembers her first boyfriend, Bill Rankin, who died of pancreatic cancer five years ago — after having been diagnosed just 11 weeks before.

“He never had a chance,” she points out. “At least I have a third of a cupful.”

This week, Ozzie and Patsy will head to Black Mountain, where Chase’s family and other family members will join them to celebrate Thanksgiving. They plan to tour Biltmore House, including its behind-the-scenes tour, and simply enjoy being together. Ozzie and Patsy will put their Christmas tree up before they leave, so it will be waiting when Patsy comes home after surgery.

In the meantime, Patsy says she’ll continue to be lifted up by friends and family.

As Ozzie wrote in one email, “We continue to absorb the love and good wishes so many have shared and we know the prayers are being heard. May that love be shared with all in need. You are each blessings in our lives and we are grateful.”