Elizabeth Cook: Thanks for sharing the journey 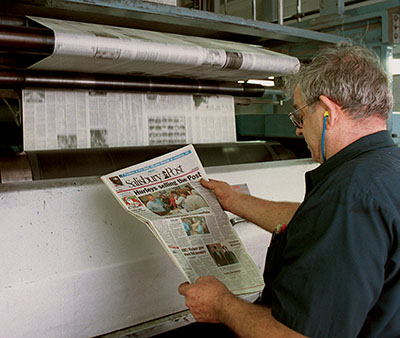 The first thing on the gratitude list this Thanksgiving is forgiveness. Put it right up there with respect.

Someone dropped by the office last week to wish me well on my upcoming retirement. As we talked, he said he always regretted the time years ago when, in his official capacity, he lost his temper with me on the phone.

This was good news. It meant he had forgiven me for whatever I did to provoke that rare break in his gentlemanly demeanor.

I will be forever grateful for people who can weather disagreements and stay on friendly terms. That takes understanding, respect and, when it’s in order, forgiveness.

Happily, there are many such people among the readers and officials I have dealt with as editor of the Salisbury Post. We can’t please all the people all the time, but we can treat each other with respect. The vast majority of people do that unfailingly, and I’m thankful for that.

Journalists are all about reporting news, but it’s the people stories that stick with us. I am thankful for the people who allowed me to share their stories.

Among the very first was a retiree in Stanfield who had figured out how to grow tomatoes planted in bales of straw. It was a good rookie assignment.

Among my most recent people-story subjects was Amy Morris, who lost her daughter Taylor to an opioid overdose. I like to think my experience — especially as as a mother — helped with that story.

My favorite assignment of all time was going to the White House in 1981 with photographer Wayne Hinshaw to shadow Elizabeth Dole one day while she was working in the Reagan administration. My story was so-so, but the experience was great — from getting to interview the Doles to gawking at some of the nation’s top journalists as we shared the same press room.

My least favorite assignment or duty came the day I had to edit stories about incidents that should never have happened — a grisly local  murder and President Clinton’s White House indiscretions, detailed in the Starr Report. In both cases I had to decide which words and situations were too graphic for our readers. Not a pleasant task.

Seeing columnist Rose Post’s wonderful writing career come to an end because of Alzheimer’s was the saddest development of my decades at the Post.

But I’ve also had the satisfaction of watching young reporters dive into their beats, master new topics and help the community understand thorny issues. We applauded them as they picked up awards and threw  farewell parties if they moved on to bigger papers or other careers. No hard feelings. Make us proud.

I’m grateful to the late Jimmy Hurley, who as publisher of the paper saw something that made him think I could lead the Post’s newsroom.

Soon after the promotion, a disgruntled subscriber brushed off my answers and asked to speak with my boss. I forwarded the call to Hurley and soon received a lesson in management. After he dealt with the caller, Hurley told me my job was to take care of problems, not to pass them up the chain of command. Thereafter I did that, as best I could. I’m thankful that Hurley gave me room to learn and grow.

My predecessor, Steve Bouser, taught me to listen carefully to all complaints and let people have their say before offering up explanations or solutions. Sometimes all people want is to be heard.

And experience taught me not to talk junk about people who make mistakes or look foolish. I’ve made too many errors of my own to do that. Seldom does  a week or two go by without being humbled in some way — by a failure of communication or lack of thoroughness. You never stop learning in this job.

My husband, daughters, grandson and the extended family — these are the people for whom I am most grateful. I’m looking forward to spending a lot more time with them.

There is a theory in some circles that journalists should not use the word “I” in columns. In conversation  and reading, we all grow weary of people who focus only on themselves with I, I, I.

Sometimes, though, “I” is really “we,” sharing the joys and sorrows we all encounter sooner or later. So there have been columns about personal things, from raising children to losing parents and welcoming a grandchild.

My greatest pleasure at the Post has been traveling this part of life’s journey with thousands of subscribers picking up the product of our labors every day. We crossed the decades together, you and I. Through the paper, we  witnessed history, debated issues, grieved losses, celebrated victories and worked puzzles, both figuratively and literally.

Thank you for your feedback and support through the years. I will miss that most of all.

Elizabeth Cook, editor of the Salisbury Post since 1993, is retiring at the end of the year.