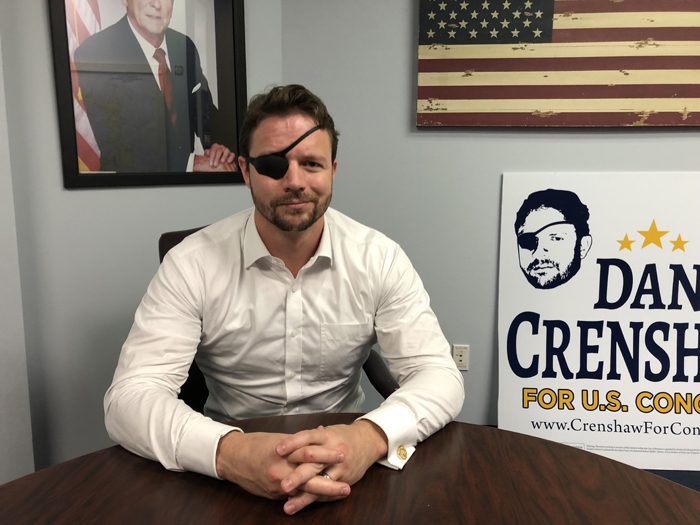 "It's life. It's not a challenge," says Dan Crenshaw of the whirlwind week that ended with him elected to Congress and guest-starring on "Saturday Night Live." Dan Zak/Washington Post

HOUSTON — Dan Crenshaw’s good eye is good enough, but it’s not great. The iris is broken. The retina is scarred. He needs a special oversized contact lens, plus bifocals sometimes, to correct his vision. Six years after getting blown up, he can still see a bit of debris floating in his cornea.

His bad eye — well, his bad eye is gone. Under his eyepatch is a false eye that is entirely deep blue. One solid color. At the center of it, where a pupil should be, is the gold trident symbol of the Navy SEALs. It makes Dan Crenshaw look like a Guardian of the Galaxy.

He can’t catch a ball very well anymore. He misses plenty of handshakes; his arm shortchanges the reach, his palm fumbles the grip. And he has trouble with dumb little tasks — he needs to touch a pitcher to a cup to properly pour a glass of water, for example. But nothing major. Nothing that would prevent him from coming out of nowhere, unknown and underfunded, to vanquish seven opponents in a Republican primary, then squash a state legislator in a runoff, and then, at age 34, win his first-ever general election — to represent his native Houston area in Congress.

He’ll join a freshman class with two dozen other new House members who are under 40 and at least 15 who are veterans. Yet Crenshaw seems poised to stand out — his potent life story, his striking presence, and his military and Ivy League credentials setting him up as a rising star for a Republican party in bad need of one, after losing what could turn out to be three dozen seats after the dust settles.

Thirty-six hours after his election-night triumph, Crenshaw still hadn’t caught up on sleep. There was some stale cake sitting in his campaign office, and he was juggling phone calls and a haircut he was going to be late for. He just left a luncheon with business leaders and was due early the next morning for a veterans ceremony. In two days, he would make a surprise appearance on “Saturday Night Live,” before heading to Capitol Hill for a two-week orientation.

A whirlwind to everyone else, it seemed, but him.

“It’s life,” Crenshaw said, sitting at a conference table in his Houston office. “It’s not a challenge.” He was the picture of calm. The eyepatch was off. The gold trident sparkled. Behind him was a large framed photo of Ronald Reagan. Ahead of him was the next mission.

Weirdly, his election wasn’t the biggest news in Crenshaw’s life last week. That came in the first minutes of Nov. 4, during the “Weekend Update” portion of “Saturday Night Live.” Cast member Pete Davidson, riffing on the midterms, presented a photo of Crenshaw, eyepatch on.

The studio audience laughed, but everyone else took to their soapboxes. How dare liberal jokesters malign an American hero! How dare conservatives put constraints on comedy! A wave of national media came his way and Crenshaw, appearing on CNN and Fox News, was cool as a cucumber. He wasn’t offended. He was just disappointed that the joke was so lame and unfunny.

Then, he says, “SNL” creator Lorne Michaels called to apologize and invite him on the show. Crenshaw hesitated. He’s not an entertainer. And he had Veterans Day ceremonies to attend. But he saw a once-in-a-lifetime opportunity to share a clear message with a national audience.

After roasting Davidson in classic “SNL” fashion (“This is Pete Davidson. He looks like if the meth from ‘Breaking Bad’ was a person”), Crenshaw took a moment.

“But, seriously, there’s a lot of lessons to learn here,” Crenshaw said, addressing the camera as he sat next to Davidson. “Not just that the left and right can still agree on some things but also this: Americans can forgive one another. We can remember what brings us together as a country.” He encouraged Americans to connect with veterans by telling them, “Never forget,” instead of just “thanks for your service.”

“When you say ‘never forget’ to a veteran, you are implying that, as an American, you are in it with them. … And never forget those we lost on 9/11 — heroes like Pete’s father,” a firefighter who died in the World Trade Center. “So I’ll just say, Pete? Never forget.”

Crenshaw’s father’s career in the oil-and-gas industry took the family to Ecuador and Colombia, where Crenshaw went to high school and learned Spanish. Captivated as a child by the SEAL memoir “Rogue Warrior,” he was commissioned as a naval officer in 2006 and underwent SEAL training, fracturing his tibia during hell week but completing the challenge on his second go-round. He deployed twice to Iraq and then, in 2012, to Afghanistan.

On June 15, 2012, when Crenshaw was 28, he and his platoon choppered into Helmand province on a last-minute mission to support Marine special ops. At the time, Helmand was littered with improvised explosive devices. Bombs were so ever-present that it was safer to crouch in place during oncoming fire — and wager on a sniper’s uncertain aim — than to dive for cover onto uncertain ground.

While Crenshaw’s platoon moved to secure a compound, an Afghan interpreter named Raqman, who wanted to become a Navy SEAL himself, responded to a call and crossed in front of Crenshaw. Raqman stepped on a pressure plate, triggering 15 pounds of explosives and suffering fatal injuries. A couple of paces back, Crenshaw felt like he was hit by a truck while being shot at by a firing squad.

On the ground, his eyes were numb. The rest of his body screamed like it had been scratched open and doused in Tabasco. He reached down and felt his legs. Good sign. He had no vision, but assumed his eyes were just filled with dirt.

“Dude, don’t ever get blown up,” Crenshaw said to him. “It really sucks.”

He refused to be carried on a stretcher, because he didn’t want to expose comrades to enemy fire for no good reason. He walked under his own power to a medevac, where he was put into a coma. He woke up in Germany a few days later, blind and swollen. The remains of his right eye had been surgically removed; eventually a copper wire would be pulled out of his left. Doctors said there was a chance he might see again, but for Crenshaw it was a certainty.

Seeing again became his mission, and that sense of mission helped him endure the hallucinations, the surgeries, the weeks he had to spend — face down and sightless — while his eye healed, and the two years it took for a medical bureaucracy to get him to a place of relative comfort. He remembered how his mother, who died of cancer when he was 10, never complained during her five-year struggle with the illness. He held fast to his sense that life is about mission; you need one in order to live, and to live productively.

Just over a year after his injury, he married his longtime girlfriend, Tara.

He deployed twice more, to Bahrain and South Korea, as troop commander of an intelligence team.

In various commendations, the Navy cited him for his “zealous initiative,” “wise judgment” and “unswerving determination.” Medically retired in 2016, Crenshaw then earned a master’s degree in public administration from Harvard Kennedy School.

In 2017 he returned to Houston — for the first significant chunk of time since he was a child — to help with recovery after Hurricane Harvey.

And then, while Crenshaw was looking for a policy job on Capitol Hill, an adviser to Sen. Tom Cotton, R-Ark., took one look at him and, before they even sat down to talk, told him to run for office. The day before, Rep. Ted Poe had announced his retirement from Texas’ 2nd District, which starts in Houston and curves around the city like a sickly tadpole. It was kismet.

“He said he wanted to run for office one day but wanted to get policy experience first,” says a Capitol Hill aide who ended up advising the campaign (and requested anonymity). “I was like, ‘Have you paid attention to some of the people we have up here? You don’t need that.’ … And he went all in. It’s the SEAL ethos. It was amazing to watch.”

“I had never heard of him before he arrived. I would venture to say most people had never heard of him,” says Vlad Davidiuk, communications director for the Harris County Republican Party. “The district has changed demographically and is no longer as solid red as it used to be. It required a candidate who was willing to campaign hard. … What distinguished Dan Crenshaw most is his ability to engage with voters.”

Over five days in February, Crenshaw laced up his sneakers and ran 100 miles through the district, campaigning along the way. Thanks to a surge in day-of voting for the crowded primary, he snuck into second place by 155 votes, besting an opponent who had spent millions of her personal fortune. By then, his personal story was resonating. His face was both recognizable and symbolic.

Most Texas Republicans aren’t very exciting, says Mark P. Jones, a political-science professor at Rice University, in Crenshaw’s district. “None of them are very compelling or appealing. They’re just sort of random old white dudes. And Dan Crenshaw was something new and different.”

He had schooled himself on border security, health care and flood-control issues — a big concern for a region still smarting from Harvey. He met with engineers to discuss infrastructure and with young Republicans to energize new voters. More than one yard in the district had both a Crenshaw sign and a “BETO” sign, in allegiance to Beto O’Rourke, the Democrat challenger to Sen. Ted Cruz (whom Crenshaw outperformed by 12 points in Harris County).

“He’s just tenacious,” Rep. Poe says of his successor. “I don’t think folks are going to know what to do when he gets (to Washington), and I mean that in a good way.”

In a 2015 Facebook post flagged by one of his opponents, Crenshaw called then-candidate Donald Trump an idiot and referred to his rhetoric on Muslims as “insane,” according to the Texas Tribune. Three years later, Crenshaw says he supports the president’s policies, save for the trade warfare, but prefers to comport himself in a manner that is the total opposite of the commander-in-chief’s.

“His style is not my style,” Crenshaw says now. “I’ll just say that. It’s never how I would conduct myself. But what readers of The Washington Post need to understand is that conservatives can hold multiple ideas in their head at the same time. We can be like, ‘Wow, he shouldn’t have tweeted that,’ and still support him. … You can disapprove of what the president says every day, or that day, and still support his broader agenda.”

On Election Day, he was the only true bright spot for the GOP in Harris County, where O’Rourke’s candidacy brought Democrats to the polls and flushed out Republicans down ballot. Crenshaw won 53 percent of the vote but reached out to the other 47 percent during his victory speech in downtown Houston.

“This life, this purpose, this American spirit that we hold dear — we are not alone,” he said then, sharing the mission. “We do it together.”

Babe Ruth awarded Medal of Freedom; what the heck…