Babe Ruth awarded Medal of Freedom; what the heck took so long? 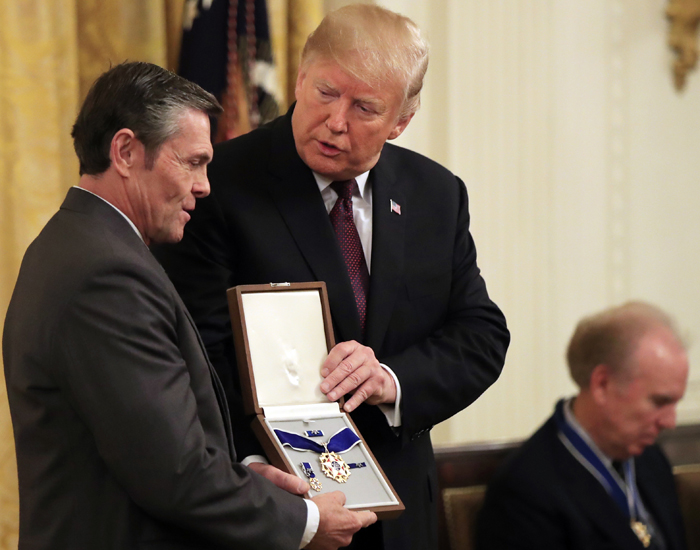 WASHINGTON — There are some things about Babe Ruth, beyond his mammoth home runs and World Series titles, that cannot be measured — among them his frequent trips to orphanages and hospitals, and his willingness to play alongside black ballplayers.

“He carried this country on his back during the Great Depression,” said Jane Leavy, author of the Ruth biography “The Big Fella.”

“He became the brand of America,” said Michael Gibbons, director emeritus and historian at the Babe Ruth Birthplace and Museum in Baltimore.

For Ruth’s family and a legion of historical admirers, their reaction is the same: It’s about time.

“It’s wonderful that he’s finally been recognized, but what the heck took so long?” asked Tom Stevens, Ruth’s grandson.

“He raised money and raised hell,” Trump said Friday in his opening remarks. “Maybe that’s why it’s taken him a long time to get this award. He should have gotten it a long time ago. I said, ‘Babe Ruth hasn’t gotten it?’ We took care of that real fast.”

Ruth is the 14th baseball personality honored with the medal. Moe Berg was the first, recognized by President Harry Truman for his “exceptionally meritorious service” as a spy in Europe during World War II. Berg declined the award, but his family accepted it posthumously.

Gerald Ford awarded the medal to Joe DiMaggio in 1977, and Ronald Reagan honored Jackie Robinson in 1984. Los Angeles Dodgers broadcaster Vin Scully was the most recent baseball recipient, with Barack Obama honoring him in 2016.

All the while, George Herman Ruth Jr. and his immense legacy sat waiting.

“While these other ballplayers are certainly worthy of induction — we’re talking Ted Williams (honored in 1991) and Jackie Robinson — I just would have thought that Babe would have been invited to take his place among his peers sooner than he did,” Stevens said. “Not just because of who he was in baseball, but the Medal of Freedom is a consideration of all the other aspects of his life. This provides a forum for highlighting Babe as a humanitarian.”

Ruth, who died of cancer in 1948, is noted for his history of good works.

He and agent Christy Walsh visited hospitals and orphanages while they traveled the country during the season or on promotional tours. On barnstorming trips, Ruth routinely played Negro League teams at a time when Major League Commissioner Kenesaw Mountain Landis drew a hard line preserving baseball’s color barrier.

“A lot of white ballplayers barnstormed against Negro Leaguers, but he’s Babe Ruth, and that’s the point,” Leavy said. “Anything he does because of his stature brings to the field a whole lot of clout. He’s implicitly sanctioning their equality by willing to play on an even playing field against them.”

During one trip to Kansas City in 1927, Ruth and Lou Gehrig visited three orphanages (two white, one black), two newspapers and Mercy Hospital, for white people only, before a parade at noon and exhibition game at 2:30, Leavy wrote in her biography.

Somewhere along the schedule, representatives from Wheatley-Provident Hospital, the black hospital in town, invited Ruth and Gehrig to stop by. Ruth skipped lunch at the Kansas City Athletic Club to visit sick children and posed for a photograph in the Kansas City Post cradling an emaciated infant.

The image circulated among the nation’s most prominent African-American newspapers. The Chicago Defender a short time later declared Ruth “a friend of the race.”

Ruth longed to manage a Major League ball club after he retired, but league executives banded together to keep him out of the dugout, Gibbons said, afraid he’d try to integrate the game a decade before Robinson broke the color barrier.

In 1942, Ruth, who as a child spoke German, signed on to an open letter to the German people denouncing “the Hitler policy of cold-blooded extermination of the Jews of Europe” and called on them “to overthrow a regime which is the infamy of German history.”

A lifelong Catholic, Ruth raised money for St. Mary’s Industrial School for Boys, the boarding school were he lived most of his childhood, once taking the school’s band on tour for fundraisers when the chapel burned down, according to Gibbons. On several occasions, he purchased cars for Brother Matthias Boutlier, one of the school’s prefects, who became his lifelong mentor.

“By nature he was very kind and very generous, probably generous to a fault. It didn’t occur to him to be anything else,” Stevens said. Ruth adopted Stevens’ mother in 1929. Now 102 years old, Julia Ruth Stevens did not travel from her home in Las Vegas to the White House for the ceremony.

The White House contacted Tom Stevens, 66, in mid-October to tell him Ruth would be honored in November with an award, though officials did not specify which honor. When Stevens told officials he would accept on behalf of Ruth and his mother, they revealed Trump’s plan to bestow the Medal of Freedom.

Ten members of Stevens’ family attended the ceremony, along with two cousins who are descendants of the late Dorothy Ruth Pirone, Ruth’s daughter from his first marriage.

“I’m grateful to President Trump that he finally recognized the Babe,” Stevens said. “God knows when it would have happened.”