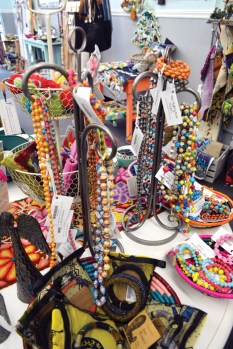 Franks likes the variety of paper bead jewelry offered by The Mighty River Project in Uganda. Photo by Susan Shinn Turner, for the Salisbury Post. 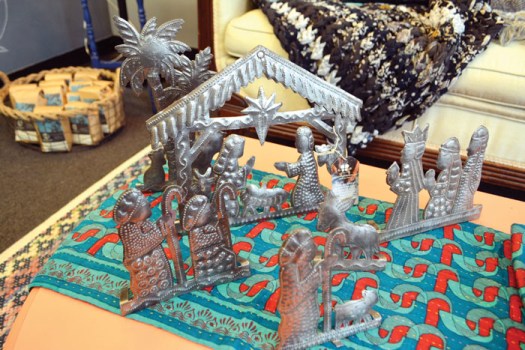 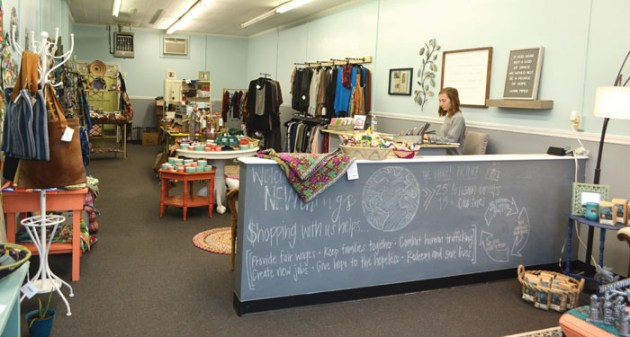 In September, Lauren Franks moved from a small room in her church in Landis to an 1,100-square-foot store in downtown Mooresville. Photo by Susan Shinn Turner, for the Salisbury Post. 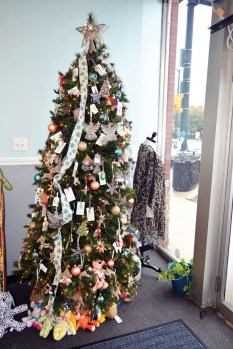 Franks has already decorated a Christmas tree with ornaments from a number of vendors. She partners with 25 organizations in 17 different countries. Photo by Susan Shinn Turner, for the Salisbury Post. 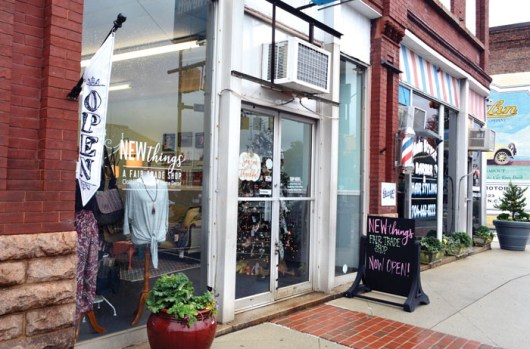 MOORESVILLE — About a year ago, Lauren Franks opened New Things, a gift shop offering fair-trade goods, in a room at her church, First Reformed, in Landis.

She quickly outgrew the space, and eventually put out feelers about getting a new space. Alan Allman, one of her board members and the owner of Jewelers on Main in downtown Mooresville, noticed a small storefront across the street from him was open.

The first time Lauren saw it, she says, she had the key in hand.

“This is about 1,100 square feet and the room at church was maybe 10 by 12 feet,” she says, “so this was a big change. We started paying rent in September, painted, and moved in little by little.”

Her opening day was Sept. 28, just a little under a year after her opening date in Landis.

“So far, it’s going really well,” says Lauren, 24. “It’s been neat meeting new people. A lot of people who came to church were people I already knew. A lot of Mooresville residents are sharing the store on social media, and Alan is really good about sending people over.”

When she opened in Landis, Lauren was partnering with about 10 fair-trade, Christian-based artisan groups in 17 countries. Since her expansion, that number has risen to 25.

Lauren admits that business during the summer was slow. But, she says, “because Christmas was so awesome, I knew I wanted to be in a bigger space for this Christmas.”

Lauren says the new space is the perfect size, and a great location. Late on a Friday afternoon, the traffic is steady outside her store windows. She hasn’t done any formal research, but knows her business this October has grown from a year ago. Being in a downtown district, she adds, her business is also weather-dependent.

“Fridays and Saturdays are usually busy, but it depends on the weather,” she says. “I’ve had Wednesdays that are busy.”

She had a great time handing out candy on Halloween afternoon with other downtown businesses. She noticed that parents came in and looked over her inventory.

“It was good publicity,” she notes.

Lauren strolls through the store, pointing out some of the more than two dozen lines she carries. Mighty River Project in Uganda makes baskets woven from banana fibers, and beads rolled from paper. They also make aprons, bags and pouches from traditional dyed fabrics. Threads of Hope from Peru — a popular line from the start — creates colorful Bible covers, Christmas stockings, and ornaments. Basha from Bangladesh makes blankets, Christmas stockings, and even bowties from repurposed saris.

Lauren has been able to expand her line of loose, comfortable clothing by Sak Sarum in Cambodia. Metal art comes from two groups in Haiti, Papillon and Second Story Goods. The lines sold so well last year — wall signs and nativity sets — that’s she’s ordered plenty of both for this Christmas season. Due to customer requests, she’s added a line of coffee, San Lazare from Honduras. She’s also continued to expand her jewelry lines.

“There’s pretty much something for everyone,” Lauren notes.

“It’s coming so much faster than I want it to,” she admits.

She continues to work two days a week at King Eye Center, then spends the rest of her time at her shop. Brian Blackwell of China Grove, her best friend Allison’s dad, fills in at New Things when she’s not there, as do Gene and Sue Clary of Salisbury, friends from church. Gay Roberts of Landis has also helped.

“When I get really desperate,” she says with a grin, “I can call my dad and sister.”

The Rev. David Franks is longtime senior pastor of First Reformed, and Lauren’s sister, Leslie, will graduate in December from UNCC. Her mom, Dawn, who works part-time as a counselor, also fills in when she can.

Lauren has been getting to know other business owners in downtown Mooresville, including Eric Simelton, owner of Main Street Barber Shop next door.

“We keep an eye on each other,” Eric says, taking a quick break from cutting a client’s hair to chat.

“We grew up together,” says Zari, who works with her dad. “I like all that she stands for. Her merchandise is different, and each piece has a story. I send people over there all the time. Lauren has a servant’s heart.”