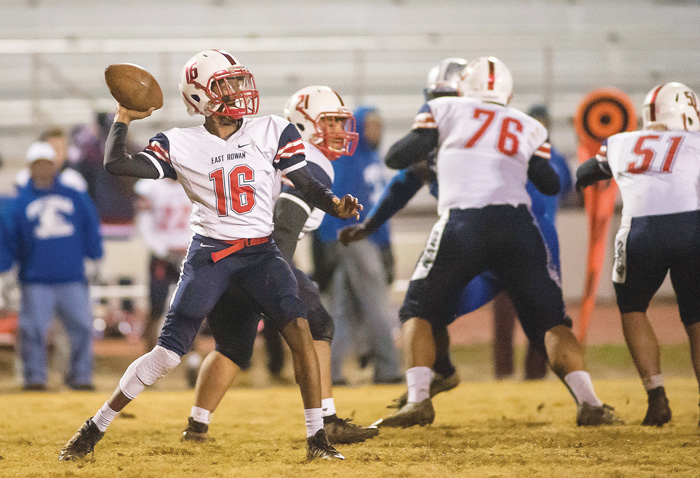 Photo by Ryan Revock/Statesville Record & Landmark ... East Rowan's Demario Chalk (16) throws the ball against Statesville in the first round of the playoffs on Friday at Statesville High School.

STATESVILLE — Statesville coach Randall Gusler glanced at the sloppy, muddy field at Greyhound Hollow one more time after his team’s narrow victory Friday in the first round of the 3A state playoffs.

“It’ll take a lot to dry out and get it ready to play on again,” he said. “But it’s a lot better than sitting at home next week.”

East Rowan turned the ball over five times and lost, 53-3, to Statesville in last week’s regular-season finale, but the Mustangs led most of the way in the rematch.

Chavion Smith’s 9-yard touchdown run with 8:07 remaining capped a 70-yard drive to even the score, and Anderson Castro booted the go-ahead extra point.

Then coach John Fitz’ Mustangs gave themselves a shot to retake the lead. They converted a fourth down-and-2 play at the Statesville 36 yard-line to keep hope alive and advanced the ball to the 14 before encountering another fourth-and-2 situation. The field goal unit came out with 49.6 seconds left.

Gusler had two timeouts at his disposal but chose not to try to ice East Rowan kicker Gabe Hinceman, who was 2-for-2 up to that point.

“I thought about it, but if he makes it and we get the ball back with less than a minute, we need those two timeouts,” Gusler said.

Hinceman appeared to slip slightly as he went to kick the ball. His 31-yard attempt was short and to the right.

Statesville and its fans breathed a collective sigh of relief.

“Survive and move on,” Gusler said.

Smith and Statesville linebacker Kobe Turner led the way on offense and defense for Statesville.

East Rowan’s defense stopped Statesville on downs four times in the opening half. None bigger than the goal-line stand inside the final three minutes. The Greyhounds had two cracks from the Mustangs 1-yard line but failed to punch it in.

Statesville’s only other possession in the first half resulted in a fumble. That led to the first of two 27-yard field goals by Hinceman.

Smith carried the ball seven times for 92 yards in the opening half. That included bursts of 32 and 52 yards. But the Greyhounds were unable to capitalize on either and, unfortunately for them, there wasn’t much else to be thrilled about offensively. Those two long runs accounted for 64 percent of Statesville’s 143 yards at the break.

Christian Bennett had 86 yards on 26 carries for the Mustangs, who were without their starting quarterback for the second straight week and also didn’t have the services of their leading rusher, Sammy Pinckney. Sam Wall added 61 yards on the ground.

Statesville managed only 240 offensive yards after pushing 400 in last week’s previous meeting, when quarterback Nebanye Moore hooked up with Ky’Wuan Dukes for three TD passes. Moore was 8 of 19 passing for 71 yards Friday.