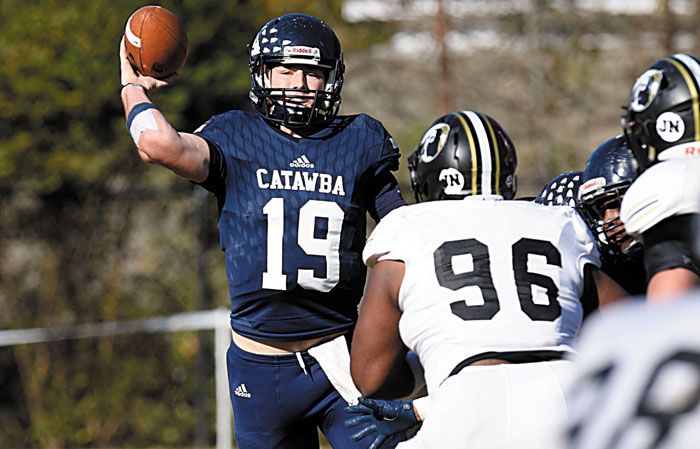 Miller could have gone through the motions in what has been a trying season, but he studied. His diligence paid off. He’s the reason Catawba fans left a joyous Shuford Stadium grinning on Saturday after a pulsating, 30-23 overtime victory.

Catawba redshirt freshman quarterback Ken Avent III made a miraculous play in overtime to deliver what proved to be the winning touchdown pass to Devonte Tanksley, but without Miller’s block of a PAT with 21 seconds left in regulation that clutch completion never happens. Instead, the Indians lose, 24-23, and heads are hanging.

“Mike studied film of the Pembroke kicker (Alex Alvarado) and knew he kicked the ball low on extra points,” Catawba head coach Curtis Walker said. “That blocked extra point wasn’t something that just happened. Mike was prepared to make that play, and he made it. That’s why, going forward, I’m so excited about this group of young men that we coach.”

Miller, a sophomore, has carved out a reputation for himself as a no-nonsense, hard-hitting safety, but Catawba’s sub-par season led to him to being passed over for the All-South Atlantic Conference teams. He made a statement that he belonged Saturday with 12 tackles in addition to his game-saving effort.

Catawba (4-7)  took a 23-17 lead on Lee Brackman’s third field goal, a 43-yarder with just 1:46 remaining, but UNC Pembroke (2-9) responded by barreling right down the field with the aid of two Catawba penalties. When QB Josh Jones spotted Shammond Hicks running free in the middle of the field, Hicks made the grab and darted past would-be tacklers into the end zone to make it 23-all with 21 seconds left . When Alvarado and the UNCP PAT unit trotted onto the field, they were one simple snap-hold-kick away from sending Catawba to another gloomy setback and a whole off-season of second-guessing.

But Miller changed everything. He knew what he had to do. He was athletic enough to do it.

“I was lined up in the middle, but I didn’t try to crash through for the block,” Miller said. “I just jumped. If I timed it, I knew I could get up high enough. Last week, I got a finger on an extra point, but it still went through. But this time, I got a lot of the ball. We kept telling the seniors we were going to pull this one out for them.”

The overtime was stressful.

The Indians didn’t have positive OT memories. They’d lost to Carson-Newman in OT at Shuford Stadium, despite playing one of their best games of the season. As was the case in the Carson-Newman game, the Indians lost Saturday’s coin toss and UNCP elected to play defense first. Catawba started at the UNCP 25.

Avent scrambled for a first down at the 12, but a holding penalty shoved the Indians back to the 22. Brackman was loosening up for another field goal try.

It was on second-and-15 from the 17 that Avent made his amazing play. He looked around, didn’t see what he wanted, started left, got spun completely around like a top by an onrushing defender, and fled to his right. Then he saw Tanksley. He was actually in the air when he made the throw on the run and was pounded to the ground by a defender as he let if fly. When he looked up, Catawba had a touchdown. Tanksley, a freshman who was the primary target all along, had made the snag.

“I was running a corner route, but then I saw Ken had to run around,” Tanksley said. “At that point, it’s a scramble drill. I ran to an open spot.”

Brackman’s PAT made it 30-23. Then Catawba just needed a stop.

The Indians got it, getting pressure by rushing six men against five UNCP blockers, with five Indian DBs tasked with defending receivers man-to-man.

“We made too many mistakes today, but in the overtime, we were locked in,” Miller said.

The Braves reached the Catawba 7, but linebacker Jeremiah Ferguson had a rugged breakup on third down, and the Braves dropped a pass to end the game.

Catawba was fortunate. UNCP missed a 31-yard field goal and a PAT in addition to the blocked extra point.

UNCP possessed the ball for most of an entertaining first half. Alvarado and Brackman traded first-quarter field goals.

Jones threw second-quarter TDs to Faheem Diabb, who made a great catch, and Aaron Whitaker.

Flying out of the slot on the left side, Tanksley was basically left uncovered. Avent hit him 10 yards down the field, and Tanksley’s legs did the rest on a 60-yard play.

“I was shocked at how open I was,” Tanksley said.

Senior Kenyatta Greene, playing his last game for the Indians, created a 61-yard dash to the house with one lightning move.

“There was a linebacker sitting in the hole, but I was able to make a quick jump-cut to the outside,” Greene said.

Once he got to the UNCP sideline, Greene, Catawba’s most dynamic offensive player, outran everyone. He’s got a banged-up shoulder, but he enjoyed a spectacular day with 164 rushing yards, 46 receiving yards and 75 yards on punt returns.

“He’s been very limited the last three games, but I’m so happy he was able to go today,” Walker said. “How much better are we with that guy on the field?”

The teams reached halftime tied at 17-all, but there was a melee shortly before the end of the half. Catawba’s standout tight end Jourdan Osinskie retaliated to late contact with a punch and was disqualified from further action.

“At halftime, Jourdan apologized to everyone,” said Catawba linebacker L.J. Melvin, who made a team-leading 13 tackles. “Losing him hurt, but the stuff that happened at the end of the half brought us together as a team. There was a lot of adversity today, but we fought through it for a good win. It’s going to boost everyone in the offseason.”

Brackman kicked a 42-yard field goal to finish a Catawba drive to open the second half. Those were the only points of the third quarter, and they put the Indians up, 20-17.

Catawba’s defense pitched a shutout until Brackman’s third field goal with 1:46 remaining pushed the lead to six points. That set the stage for a furious finish.

“We looked at this game was an opportunity for us and our guys fought to the last play,”  Walker said. “This lays a strong foundation for the offseason, for the weights, for winter conditioning and for spring ball. We’ll use it as a springboard for a strong 2019.”

NOTES: The teams were making up a game postponed in mid-September by Hurricane Florence. … North Rowan graduate Steven Thurston saw action on both sides of the ball for the Indians. Normally No. 97, he wore 69 so he would be eligible to play on the offensive line as well as his normal defensive tackle position. … UNCP got 107 rushing yards from workhorse McKinley Nelson, who carried 26 times. UNCP QB Josh Jones threw for 230 yards and three TDs. Backup QB Josh Dale, the former Robinson star, led a nice drive but fumbled a snap and Melvin made the recovery for Catawba. … Avent threw for 210 yards. … The flurry of field goals gave Brackman 12 for the season. … Backup tight end Joseph Dress made two nice catches for the Indians before being injured. … With Dress hurt, QB Reid Carlton, handled critical holding duties on Brackman’s kicks. … Cadarreus Mason, a South Rowan grad who was a standout for UNCP, attended the game.