Cokie and Steven Roberts: Defending the rule of law 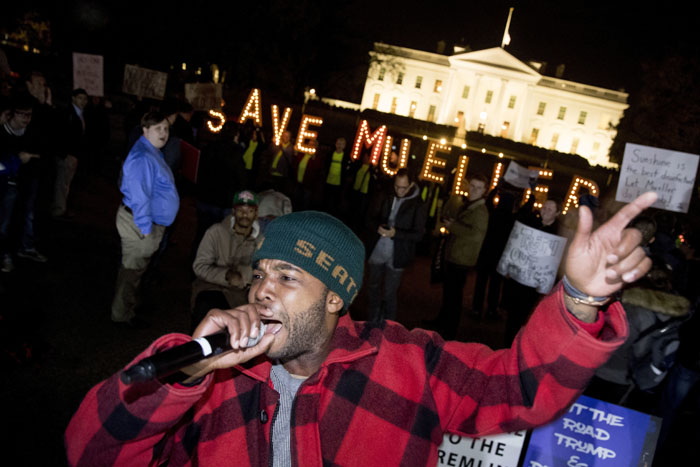 Protesters gather in front of the White House on Nov. 8 as part of a nationwide campaign demanding that acting U.S. Attorney General Matthew Whitaker recuse himself from overseeing the special counsel investigation. Andrew Harnik/Associated Press

This should be Job 1 for the lame-duck session of Congress: Pass legislation to protect Special Counsel Robert Mueller from President Donald Trump and his allies. If the measure fails, then Democrats should make it their top priority when they take control of the House in January.

Senate Majority Leader Mitch McConnell keeps saying such legislation is not necessary, because “the president has said repeatedly he’s not going to dismiss the Mueller investigation.” McConnell has the power to shelve the matter, but he is clearly indulging in massive self-delusion.

Why would you take the word of a president who has made about 6,500 “false or misleading” claims since taking office, according to The Washington Post? He’s the same president who has repeatedly disparaged Mueller’s investigation as a “witch hunt” and is clearly itching to get rid of him.

If there were any doubts about Trump’s true feelings, they were quickly erased after the midterm elections. The president fired Attorney General Jeff Sessions — who had defended the special counsel and his probe into Russia’s role in the 2016 election — and replaced him on an acting basis with Matthew Whitaker, a total Trump loyalist who has frequently criticized Mueller and suggested shutting down his investigation.

Recent news reports say Mueller is focusing on Donald Trump Jr. and the Trump family’s business connections to Russia. If true, that would only inflame the president’s impulse to terminate Mueller.

A headline over a Post op-ed by law professor Harry Litman put it bluntly: “The Mueller probe could be in mortal danger.”

Former U.S. Attorney Joyce White Vance was even more alarmist, telling the Post, “All of the guardrails are off and the rule of law is under an unprecedented threat.”

That’s true. Even before he was elected, Trump repeatedly demeaned “so-called judges” who ruled against him. He’s attacked his own FBI (“its reputation is in tatters — worst in history!”) and his own attorney general (“very weak” and “disgraceful”) because they refused to serve his political goals.

The president simply has no understanding of an independent legal system — investigators, prosecutors, judges — that resists his influence and pressure. McConnell’s trust in the president’s intentions is either woefully naive or willfully misguided.

A few Republicans have understood Trump’s threat. Sen. Susan Collins of Maine supports a bill that says Mueller can only be fired “for good cause and in writing,” and only by an official confirmed by the Senate — which leaves out Whitaker, who’s never been confirmed.

“Senate debate and passage of this bill would send a powerful message that Mr. Mueller must be able to complete his work unimpeded,” she said.

Sen. Jeff Flake, an Arizona Republican who is leaving Congress, joined Democrat Chris Coons in pressing lawmakers to consider a bill that passed the Judiciary Committee earlier this year but never reached the floor. “After the firing of the AG, it is more important than ever to protect the Special Counsel,” he tweeted.

Minority Leader Chuck Schumer says he will try to attach a Mueller protection amendment to must-pass spending legislation and “avoid a constitutional crisis.”

Even if Trump vetoes such a measure, a “powerful message” would still be sent, and come January, House Democrats will be in a position to amplify that message through hearings and investigations. For example, Rep. Jerrold Nadler, who’s in line to run the House Judiciary Committee, said his first act will be to summon Whitaker, the interim attorney general, and scrutinize his intentions toward Mueller.

“The president may think he is above the law,” Nadler told CNN. “He may think that he will not be held accountable, but he will be.”

Rep. Adam Schiff, the likely head of the Intelligence Committee in the new Congress, wrote in the Post that Whitaker should recuse himself from supervising the special counsel.

“The president and Whitaker should heed this warning,” he wrote. “The new Democratic majority will protect the special counsel and the integrity of the Justice Department. Should Whitaker fail to recuse himself — all indications are that he plans not to — and seek to obstruct the investigation, serve as a back channel to the president or his legal team, or interfere in the investigations in any way, he will be called to answer. His actions will be exposed.”

Those are brave words, but they have to be backed up by action. The rule of law really is at stake here, and Mueller must be allowed to complete his investigation, unrestrained by a president who obviously doesn’t respect that basic American principle.

Quotes of the Week: ‘Satisfied with what we got’