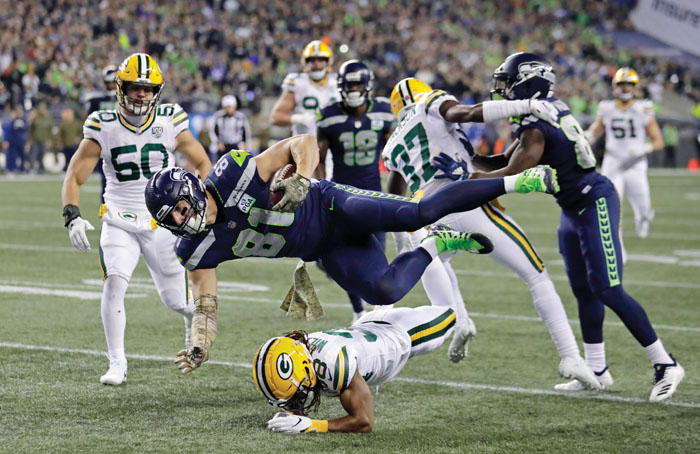 SEATTLE (AP) — After a shaky beginning, Russell Wilson got hot in the fourth quarter and kept the Seattle Seahawks in the middle of the NFC playoff race.

Wilson threw for 225 yards and his 15-yard touchdown pass to Ed Dickson with 5:08 left was the difference in the Seahawks’ 27-24 victory over the Green Bay Packers on Thursday night.

In a key matchup in the battle for the two NFC wild-card spots, Seattle (5-5) snapped a two-game losing streak by overcoming an early 14-3 deficit. Wilson was shaky at times early game, but was outstanding in the fourth quarter, capping the winning drive by recognizing a blitz and hitting Dickson quickly for his second TD pass of the night. Seattle still has not lost three straight games since the middle of the 2011 season.

Aaron Rodgers had a huge first half for Green Bay (4-5-1) and threw for 332 yards, but the Packers had just one scoring drive in the second half, helped by a 57-yard strike from Rodgers to Davante Adams. Rodgers threw a pair of touchdown passes in the first half, but never got the ball back after Green Bay punted with 4:20 left.

Seattle ran out the clock thanks to a pair of runs from Mike Davis.

Chris Carson rushed for 83 yards and a touchdown, overcoming the mistake of fumbling on the first play of the game and setting up Green Bay’s opening score. Tyler Lockett had two key receptions late in the fourth quarter and Doug Baldwin had his first TD catch of the season for Seattle.

Rodgers was 21-of-30 passing with 10 of those going to Adams for 166 yards receiving. Backup tight end Robert Tonyan had the first catch of his career go for a 54-yard touchdown to give Green Bay an early 14-3 lead. The Packers led 21-17 at halftime after Jones caught a 24-yard TD pass from Rodgers in the final minute of the half, but Green Bay’s offense was stymied in the second half.

The Packers gained just 114 yards in the second half, half coming on the one throw from Rodgers to Adams. That pass set up Mason Crosby’s 36-yard field goal with 8:23 left, but Wilson had one more answer.

Wilson hit Lockett on consecutive plays for 18 yards — to convert a third-down — and 34 yards to the Green Bay 16. Two plays later, facing another third-and-long, Wilson recognized the blitz and hit Dickson quickly over the middle to put Seattle in front.

That proved to be enough. On Green Bay’s next drive, Rodgers short-hopped a pass on third-and-2. Rather than going for it on fourth-down, Mike McCarthy opted to punt despite having just one time out. Seattle never gave the ball back.

Green Bay was down four starters with CB Kevin King, S Kentrell Brice, LB Nick Perry and WR Randall Cobb all out due to injuries. They lost two more in the first half when Bashaud Breeland — starting for King — aggravated a groin injury and Jimmy Graham injured his thumb. Graham had a 13-yard reception on Green Bay’s first offensive play in his return to Seattle, but that was his only catch.

Mike Daniels suffered a foot injury early in the second half and backup safety Raven Greene suffered an ankle injury. Neither returned.

LOS ANGELES (AP) — Sean McVay has looked up to Andy Reid for years. The Los Angeles Rams’ young coach constantly studies video of his Kansas City counterpart’s offensive sets during the season, marveling at their intricacies and ingenuity.

“Every single week they do something where you say, ‘That’s pretty good,’” McVay said with an understated smile. “I’d be lying if I said we haven’t stolen some of their stuff this year.”

McVay gets a close-up look Monday night in one of the biggest games of the regular season and a possible Super Bowl preview.

The Chiefs (9-1) are visiting the Rams (9-1) in a game originally scheduled for Mexico City before poor field conditions at Azteca Stadium prompted the NFL to move the game to California on six days’ notice.

Instead, the Coliseum will host a meeting of two prolific offenses masterminded by coaches separated by 28 years of age, but shoulder-to-shoulder on the cutting edge of football.

“He’s done a phenomenal job,” said Reid, a Los Angeles native who lives in Orange County in the offseason. “He came up through a good system. He’s put his own flair to it. He’s a smart kid. I am proud of him for the job he’s done.”

Two offenses averaging 33 points per game have never met this late in a regular season, and the game is only the fifth meeting since 1970 between two one-loss or unbeaten teams in Week 11 or later.

Offensive fireworks seem inevitable in a matchup tailor-made for prime time, even if the late venue switch caused logistical hurdles for ESPN . Both teams expressed disappointment about the game being moved out of Mexico City, even though McVay said it was “clearly the right thing to do” given the field conditions.

“We’re certainly not going to complain about getting the chance to play at the Coliseum in front of a great atmosphere,” McVay said.

More things to watch in the first “Monday Night Football” game at the Coliseum since 1985, and the Rams’ first in the venerable arena since 1979:

The Chiefs should have WR Sammy Watkins (foot) and LB Anthony Hitchens (ribs) on the field against the Rams. Neither played last week against Arizona.

, though Hitchens was active in what Reid called “an emergency situation.” Undrafted rookie Ben Niemann got the start in Hitchens’ place and performed reasonably well. Watkins is returning to the Coliseum, where he spent last season as the Rams’ deep threat before getting a huge free-agent deal with the Chiefs.

Mahomes spent part of the week mourning the death of his longtime girlfriend’s stepfather. The man had a medical emergency during their game against Arizona last Sunday, and Mahomes learned after leading Kansas City to a 26-14 victory that he had died. The Chiefs were off Tuesday and Wednesday, giving Mahomes time to spend with family, but he did not miss any practice time. “They’ve got some things organized and settled down from that side of it,” Reid said, “so he can do what he’s got to do.”

But the Chiefs traded Peters to Los Angeles last offseason, and Reid has been reluctant to talk about why the organization gave up on the talented, occasionally volatile cornerback. Peters has generally played well in LA, although he acknowledged that he struggled two weeks ago when the Rams went up against the NFL’s other dominant offense at New Orleans.

The Rams haven’t had any evident problems with Peters off the field, either. “He’s got a good feel for the game,” McVay said. “He’s passionate about it, and I think that I’ve been able to learn some things from him and enjoy being around him.”

The Chiefs allowed five sacks last week against Arizona, the first time all season that their hodgepodge offensive line has struggled that much. That’s not a good sign when the next opponent has NFL sacks leader Aaron Donald and Ndamukong Suh on the defensive line.

The Chiefs have been playing without C Mitch Morse (concussion) and RG Laurent Duvernay-Tardif (broken leg), forcing them to shuffle things around. “You know,” Reid said, “I thought it could be a positive for us. That group hasn’t played a bunch together, and so (the Cardinals) did a couple of things in there that will help us down the road here and we can learn from.”