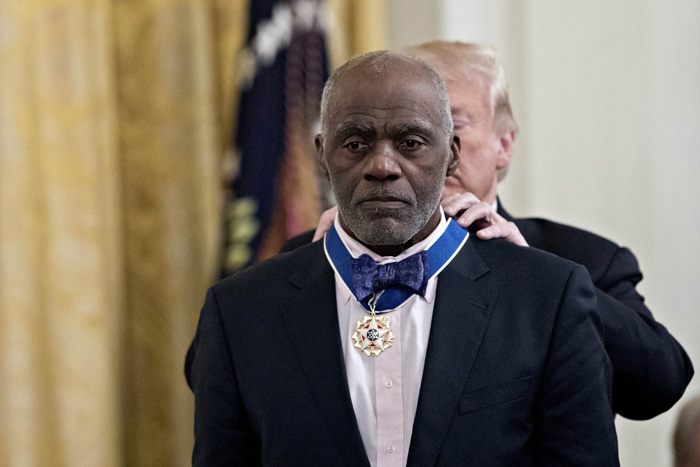 WASHINGTON — President Donald Trump mused Friday that the late Supreme Court Justice Antonin Scalia, a father of nine, had been “very busy.” He said the White House employee responsible for cutting off an Elvis Presley song partway through had “no promotional ability.”

He told baseball owner George Steinbrenner’s grandson that Steinbrenner was “a real piece of work” and exhausting to be with, although worth the effort. He reeled off baseball facts that weren’t in his prepared script and told a golf story.

The award, created by President John F. Kennedy, is the nation’s highest civilian honor. Scalia’s widow accepted on his behalf, as the man Trump chose to replace him, Justice Neil Gorsuch, looked on. Six of the court’s nine justices attended, including the newest, Justice Brett Kavanaugh.

Trump read off the names of Scalia’s children, all in attendance, and then paused.

“You were very busy,” Trump said, as widow Maureen Scalia laughed. “Wow. I always knew I liked him.”

Representatives for Ruth and Presley, both dead for decades, accepted those awards.

Trump reminded Dallas Cowboys legend Staubach that Staubach had once made a miraculous par to save their team in a golf tournament.

Page, who served two decades as a judge in Minnesota after retiring from the Minnesota Vikings and the Chicago Bears, has supported current NFL players who kneel during the national anthem.

Trump, seeming jovial and relaxed, said he was pleased to be the president to finally honor Ruth.

He then went on an extended riff about Ruth’s early career as a pitcher that departed from the printed script visible on screens at the back of the room. He added a riff about his friend Steinbrenner, who bought the Yankees 25 years after Ruth’s death.

“People don’t know that. Babe Ruth was one of the best pitchers. He still has records today,” Trump said.

Trump asked George Steinbrenner IV to stand and told the 22-year-old auto racing owner: “George was a real piece of work, I have to tell you that. Your grandfather was very difficult, but he was good.

“He had a good heart. Sitting with George during the playoffs, as I often had to do, was like, you’d go home exhausted. It was exhausting.”

When he got to Elvis, a recording of the gospel and rock singer singing “How Great Thou Art” played for a few moments, then faded out. Trump looked annoyed.

“That was my idea. I said, ‘Give me a little — a little song.’ That was, I guess, a little promotional ability.”

As the audience laughed, the former reality television master of ceremonies continued: “I’d like to hear the rest of the song. I don’t know why they cut it off so short. They have no promotional ability, that’s why.”

Hatch, Trump noted, “liked me right from the beginning, and therefore I like him.”

“That helps,” Trump continued, to laughter. “That’s the way it is. I guess I’m not supposed to say it, but that’s the way life works, right?”

Trump lauded Adelson, a doctor, for her work in the field of addiction and noted her involvement in Jewish philanthropic causes. Trump did not mention the millions that Miriam Adelson and her husband, casino magnate Sheldon Adelson, donated to help him and other Republicans in 2016.

Adelson was seated in the third row.