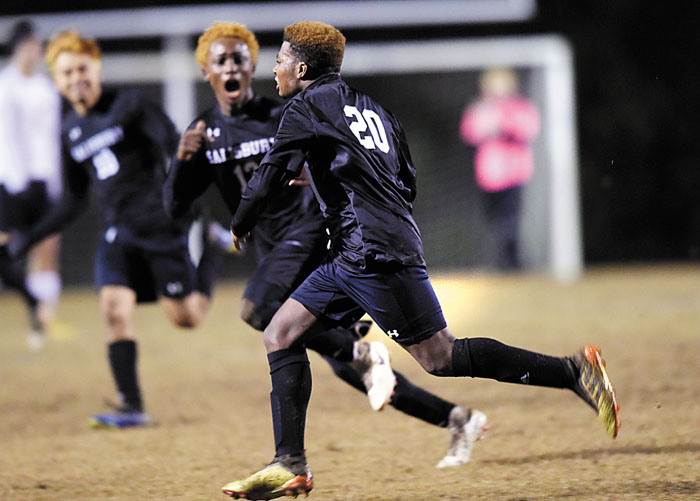 MOUNT ULLA — There couldn’t be a more sudden death than the one Salisbury’s boys soccer team endured Thursday night.

The third-seeded Hornets went toe-to-toe and nose-to-nose with defending state champion Newton-Conover in the 2A semifinals, only to fall in a season-ending round of penalty kicks.

“Human nature says to hang your head in instances like this,” coach Matt Parrish said at West Rowan High School, where Salisbury (24-3-1) was outscored 4-2 in a decisive shootout. “You cry when you feel like you left something on the field, that you could have done something better. I’m not sure we could have.”

For 110 minutes, the Hornets persevered against fourth-seeded N-C (also 24-3-1), a team unbeaten in 18 matches since losing in overtime on Sept. 12. The squads traded goals in regulation — Eriq Argrett scored for Salisbury in the first half and Noel Fong answered for the Red Devils in the second — before bluffing each other during two cautiously played overtime and two sudden death periods.

“I was confident in myself,” said take-charge keeper Josh Faulkner, one of 11 Salisbury seniors who suited up for the last time. “It just didn’t go our way. But on any given night, we could have won a match like this.”

They didn’t, despite taking 1-0 and 2-1 leads in the shootout on conversions by Chris Portillo and Faulkner. Teammates Tony Figueroa and Jack Fisher were foiled on subsequent tries against winning keeper Jon Joplin. Newton-Conover countered by burying each of its four attempts against Faulkner, including defining goals by Jason Agreda and Dilan Esperilla.

“I don’t have any worries when (Joplin) is in goal,” said N-C coach Angelo Palozzi. “I have faith in our guys to make PKs and faith in him to stop at least one of them.”

Salisbury was disappointed, yet gracious in defeat. The Hornets had won 13 straight matches and hadn’t been on the losing side of a handshake line since Sept. 11.

“Honestly, I’m depressed that we lost,” said Fisher, the sergeant-at-arms along Salisbury’s back line. “But when we look back on our season, we’ll realize how much we accomplished. Maybe we didn’t have the most talent, but we had the best heart of any team.”

It was heart that kept Salisbury rolling through a conference-championship season and four pulsating, post-season triumphs. Each match was another mountain to climb, another river to cross. But against N-C, it was outshot 24-14 and forced to play beyond its comfort level.

“We came here and played under pressure for 80 minutes,” Parrish said. “Then we played another 20 minutes and then another 10 — all under pressure. Yes, I thought there were times when we were the ones exerting effort and we were the ones going forward. There were certainly peaks and valleys. I’m unhappy with the result and I wish it were different, but at the end of the day that’s all I’m unhappy about. These players gave me and Salisbury High School and Coach (Taylor) Strode everything they had. That’s why I told them they had to keep their heads up. That’s part of being a man.”

Argrett was the man in the first half. The senior midfielder put Salisbury ahead in the 25th minute when his 30-yard laser beam from the left side that flew past Joplin’s outstretched hands and settled just under the crossbar.

“Eriq picked his head up, saw the goalkeeper out of position and chipped him,” said Fisher.

Fong’s tying goal came with 28:31 remaining in the second half. The sophomore halfback took two stabs at the ball, escaped from a crowd and pumped a left-footed 15-yarder past Faulkner. “He had a one-on-one with me,” the keeper said. “I tried to get big and make a stop, but he tucked in the back corner.”

The remainder of the match was a test-of-nerves, with each team failing to convert on few, if any, legitimate opportunities. The verdict wasn’t determined until the closing arguments — hard shots into the upper left corner that beat Faulkner. Esperilla’s game-ender saw the keeper dive to his left, leaving half the net unguarded.

“On PKs you just guess,” Faulkner said after making 17 saves. “I tried to read their body language, but usually I go off intuition.”

It took a wrong guess to conclude a season that was right in so many ways.

“I feel proud for my team,” said Figueroa, the senior who scored six of his team-high 16 goals in the playoffs. “Not many people thought we’d make it this far. But I’ll remember all the hard work and tough games we had to win to get here.”

When it was over, Salisbury players — perhaps frozen by disappointment — busied themselves with post-game chores. Every song has a final verse and the closing lyric was delivered by Parrish.

NOTES: The match was played at West Rowan because Salisbury’s muddied Ludwig Stadium field was unsuitable. … Newton-Conover will chase its fourth state championship — and third since 2014 — in Raleigh on Saturday. The Red Devils face Clinton with a 10-game winning streak at its back.