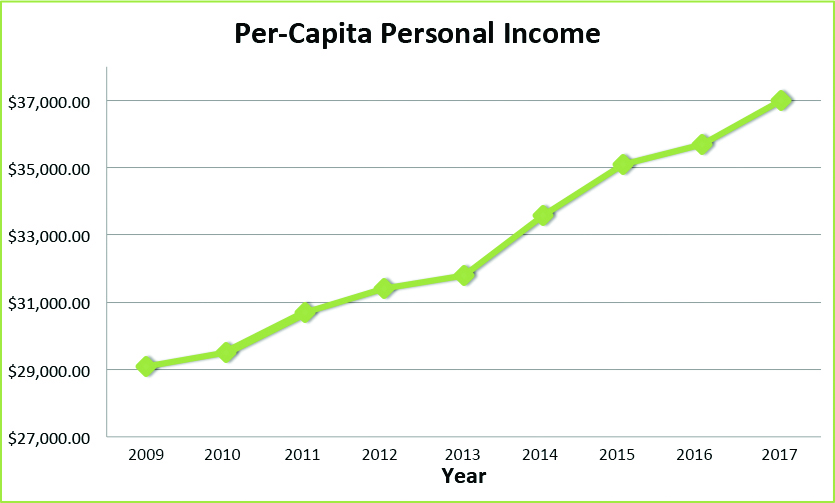 SALISBURY — Personal income rose in Rowan County in 2017, as it did in nearly 90 percent of counties nationwide.

According to a Bureau of Economic Analysis report released Thursday, income rose in 2,787 of 3,113 counties in 2017. Eight counties saw income levels stay the same, and 318 counties saw decreases.

The report defined personal income as “the income received by, or on behalf of, all persons (within a county) from all sources.” This includes earnings from wages, investments and other ventures.

This is the county’s ninth consecutive yearly increase, for a total of 25 percent growth since 2010.

“Companies all across the county are paying higher labor costs because workers are scarce,” Edds said.

He said the county is continuing to work to bring in jobs that pay higher-than-average wages.

“That provides opportunity for folks to move up the pay scale, but it also forces existing employers to increase their wages in order to preserve their current workforce,” he said.

“Our public schools, community colleges and private colleges have to be engaged with our economic development leadership to be sure they’re matching the skills training to the demands of those higher-paying employers we’re trying to attract,” he said. “The good news is, that’s happening now.”

Neighboring counties saw single-year increases ranging from 4.6 percent in Stanly to 3 percent in Iredell. Davidson County had an increase of 3.8 percent; Davie, 3.7 percent; and Cabarrus, 3.3 percent.

Orange County ranks the highest in North Carolina with an average income of $62,202.

Statewide, counties with the best and worst changes were Hyde, gaining 7.1 percent, and Onslow, losing 2.2 percent.

The Bureau of Economic Analysis said that numbers in the report are estimates. Final income numbers for states and metropolitan areas are scheduled to be released in May.

Kannapolis next to consider agreement on utilities for interchange…