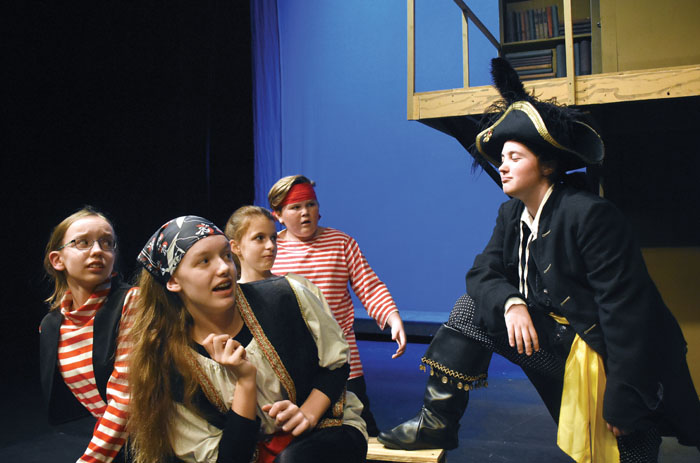 “I loved the play so much.”

“It has so much fun, and it was so beautiful.”

A tale of pirates and treasure captured the imaginations of students from North Rowan and Bostian elementary school students who say the PPT Youth theater production of “Magic Tree House: Pirates Past Noon.”

Here’s a sampling of their reviews:

The play features Jack and Annie from the New York Times bestselling series “The Magic Treehouse.” If you have kids that are obsessed with the series, they will love the play. It also features countless songs. … Go and see the play quickly because you can only see it from Nov. 5 to 17. You can find it in the Norvell Theater in Salisbury. — Danny Pirhala

The play was exciting, and the actors had self -steem and courage. The set looked like something I had never seen. The crowd roared at the end like somebody broke a leg. It was hilarious. When I heard them sing, my hair stood up. Like OMG, so funny. The best. The costumes had so much work put into it. The people didn’t have to do this. Guess what? They did OK. These kids went to the max as high as the sky. These kids had straight talent. — Jevin Smith

I suggest coming to the theater because the plays at the Norvell Theater are brilliant. Also, the actors are great and … Capt. Bones was a great actor. The play was also about the book and how they went to the age of pirates. — David Jesus Jivalois

The actor playing Jack is Luke Barbican and the actor of Annie is Maryella Risk. The place was Norvell Theater, and the pirates kept telling Jack and Annie to find them more gold. — Azariah Walker

The two main characters are Jack and Annie. It’s about two kids that travel back in time and go to when pirates were around. The play is Nov. 5-17 at the Norvell Theater. — Grayson Wengstrom

“Pirates Past Noon” is so funny. It has so much fun, and it was so beautiful. It was like you were in it. And you might see people who you know, and it is at Piedmont Players. And make sure your kids see it, and you have til the 17th. — Serenity Gilmore

“Pirates Past Noon” was really good because it shows passion in all the characters. The characters were great at the play. I love the play. The show was the best play I have ever seen. You should really go. — Kaylee Connor

At the Norvell Theater, “Pirates Past Noon” by the Magic Tree House is playing. The two main characters are played by Luke Barbina, who played Jack, and Maryella Rosko, who played Annie. The play has songs, pirates and the tree house. I really loved the play and suggest you see it. — Fallon Osborne

On Nov. 5, we went to go see the “Pirates Past Noon” play at the Norvell Theater. I knew someone in the play. His name is Rylan Furr. He played Pinky. Pinky is one of the pirates of Capt. Bones’ crew. I loved the play “Pirates Past Noon. There were very cool costumes and they were really pretty. Capt. Bones was mean but funny at the same time. I liked that Jack and Annie ran up and down the stairs when they were coming up to the stage. — Anisten Cook

It was an awesome show and it was kind of funny. There was a boy named Rylan Furr. He was the Pinky/Seagull. And there was two humans. There was a boy and a girl named Maryellen and Luke, and there were a lot of kids. … And their costumes were awesome. It was the best show. — Aryam Shamman

I enjoyed the play because it was creative and the actors gave it all they had. … The singing was my favorite because I was trying to sing. I would mess up, so it’s good to watch people with talent. — Jordan Smith

What I love about “Pirates Past Noon” is they had big boots and stuff to go with the book and Jack found the chest. What else I loved is the people, that they work hard. It was cool. — Camron Johnson

It was a good play because he had a magic tree house and it takes them places they wanted to go and they went to pirate time. And they went on the sand and the sand was hot, so they went on the water so their feet would be cool. And then they saw pirate ships coming their way. — Demarion Hanson

I enjoy watching “Pirates Past Noon” because the pirates were men and the kids Jack and Annie helped a pirate and the award was the pirate helped them get out. And my favorite part was when they found out who the gold medal belonged to. … And so I liked when they came from the top of the stairs and acted like they where in a boat. — Ariyana Walker

I like the play because I like all of the songs and the characters that where all dressed up as they sing. — Sadie Sophia

It is about Jack and Annie. Pirates wanted gold, and Jack had a gold medal in his backpack. — Samuel Diaz

The play was at the Norvell Theater. It’s Jack and Annie. They play and they sing. They had a captain pirate, Capt. Bones. And they also had a parrot name Polly. The play was awesome. It was the best play ever! — Dariya Carpenter

… Some pirates aren’t like the others. One pirate wants to learn how to read. The play is wonderful. The kids were wonderful. I recommend going to the play. —Mara Williams

In the play “Magic Tree House: Pirates Past Noon,” there was a captain named Capt. Bones that lead his pirate crew to a deserted island to find treasure. We also saw a parrot, rowboats, singing, dancing and amazing actors. If you want to see if the pirates find the treasure, come and watch the play. — Chase Delehant

In the play “Magic Tree House: Pirates Past Noon.” the actors sang and danced. The characters were Jack and Annie and the pirates. Maybe you should check out this fantastic play. My favorite part was when the magic treehouse started spinning. — Paxton Servis

In the musical “Magic Tree House: Pirates Past Noon,” there was singing, dancing, rowboats and parrots. In the story, Capt. Bones led her crew on a hunt for treasure and gold. If you want to learn more, come and see this play. — Carson Gordon

In the play, there was a lot of singing. My favorite part was when Annie and Jack were in the tree house and it started spinning. They were trying to look for treasure. The characters rode in real boats and that was really cool. I also liked that Annie and Jack read a lot in their magic tree house. — Sophia

We saw a play at the Norvell Theater. They told us a story titled “Magic Tree House: Pirates Past Noon.” There were lots of pirates that tried to steal gold. I loved the play so much. You should go see it. — Remy

The play we went to was “Magic Tree House: Pirates Past Noon.” One of the parts that I liked about the play was the part when Jack and Annie taught Jonah how to read. My favorite part of the play was when Capt. Bones found Morgan Leigh Fay’s gold neckless and demanded more gold and treasure because the caption sounded so mean and bossy. I also liked when the pirates sang a song for the introduction. The closing song was also interesting. Go see the play to find out the rest. — Audrey

I went to “Magic Tree House: Pirates Past Noon.” The play was about pirates finding treasure. They found a gold neckless with an “M” on it. My favorite part was when they found the treasure. I loved it. It was at the Norvell Theater. — Anabelle Chavis