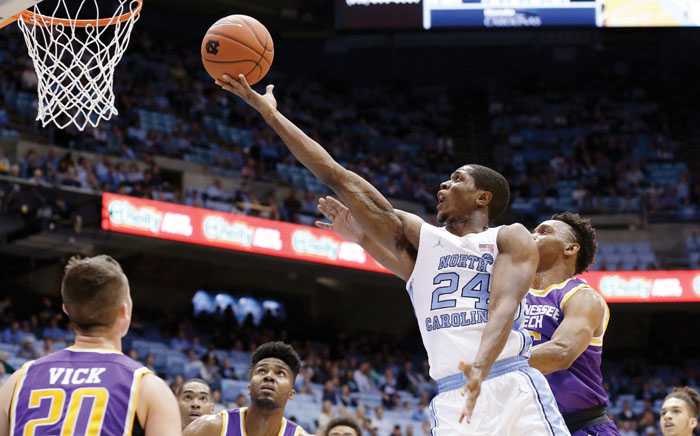 By AARON BEARD, AP Basketball Writer
CHAPEL HILL (AP) — Luke Maye had 15 points to help No. 7 North Carolina beat Tennessee Tech 108-58 on Friday night.
Sterling Manley added 13 points for the Tar Heels (4-0), who shot 55 percent against an overmatched opponent. Seventh Woods had seven points and a career-best eight assists off the bench, including a behind-the-back pass to set up a corner 3-pointer from Cameron Johnson after halftime.
The Tar Heels ran off a 17-2 first-half run to blow the game open, and then kept stretching the lead by repeatedly getting out in a transition-filled romp. They finished with 29 fast-break points, higher than any total last season.
UNC also dominated the glass (54-24), had 30 second-chance points and cracked 100 points for the second time despite shooting 5 of 23 from 3-point range.
Micaiah Henry scored 20 points to lead the Golden Eagles (0-4), who shot 36 percent and had 22 turnovers.
BIG PICTURE
Tennessee Tech: A rough start to the season got rougher. The Golden Eagles had lost by 15 at Memphis, by 15 at home against Presbyterian and by 14 at Savannah State coming into Chapel Hill — putting them at No. 317 in KenPom’s national rankings entering Friday’s games. This time they fell behind by double figures by the 13:36 mark of the first half and watched the margin grow steadily.
UNC: Woods’ play was perhaps the most encouraging development. Coach Roy Williams has been looking for Woods and freshman starter Coby White to provide steady play at the point after the departure of former Final Four most outstanding player Joel Berry II. Woods is a gifted athlete who arrived at UNC known as a YouTube dunking sensation, but he had struggled to find a steady role. On Friday night, at least, the junior looked comfortable finding teammates in transition and even hit a 3-pointer — only the third of his career and first since November 2016.
UP NEXT
Tennessee Tech: The Golden Eagles visit No. 11 Michigan State on Sunday.
UNC: The Tar Heels host St. Francis (Pa.) on Monday.
___
More AP college basketball: https://apnews.com/Collegebasketball and http://www.twitter.com/AP_Top25
___
Follow Aaron Beard on Twitter at https://twitter.com/aaronbeardap