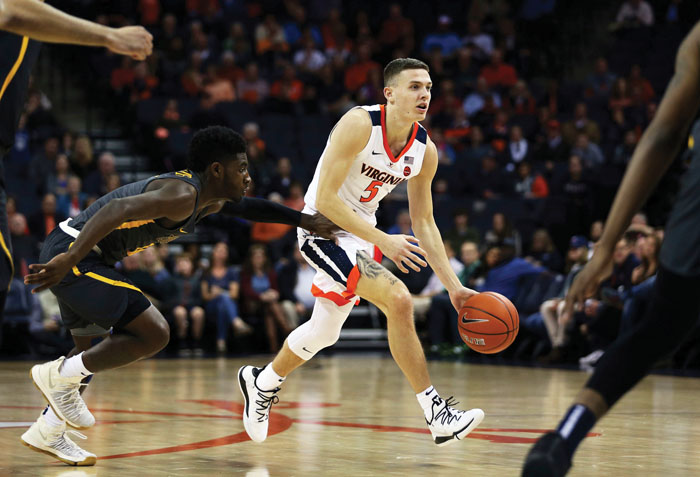 By HANK KURZ Jr., AP Sports Writer
CHARLOTTESVILLE, Va. (AP) — De’Andre Hunter scored 20 points, and No. 4 Virginia opened with a 21-5 run and beat Coppin State 97-40 on Friday night.
Hunter was outscoring the Eagles for most of the first half after hitting two early 3-pointers for the Cavaliers (3-0). A 3-pointer by Ibn Williams with 6:10 left in the half finally gave Coppin State more points than the sophomore forward (13-11), but the Eagles trailed 26-13.
Ibn Williams and Lamar Morgan led Coppin State (0-4) with six points each. The Eagles trailed 45-17 at halftime and 63-20 after a 15-0 run by Virginia in the second half.
Mamadi Diakite started in place of Jack Salt (stiff back) for Virginia and added a career-high 18 points on 7 for 9 shooting. Ty Jerome scored 11 with six assists. The Cavaliers shot 60.3 percent overall (35-58) and were 15 for 25 (60 percent) from behind the arc.
KERSEY TIME
Senior manager Grant Kersey has become a fan favorite during three lopsided home victories at home and was again against the Eagles. He checked in during wholesale changes with 3:35 to play and, with one minute left, swished a 3-pointer for his first career field goal.
Kersey, allowed to dress for home games, had a steal in the opener and hit two free throws in the Cavaliers’ last game.
BIG PICTURE
Coppin State: The Eagles have earned their 0-4 mark to start the season, playing on the road at Wisconsin, Dayton, Navy and Virginia. Second-year coach Juan Dixon fell to 5-31, but beyond a starting five that features three seniors and a graduate student, he’s got a roster full of freshmen and sophomores that may fit better into the style he’d like to play.
Virginia: The Cavaliers haven’t experienced much resistance in beating Towson, George Washington and the Eagles to start the season, but they may get tougher competition when they head to The Bahamas for the Battle 4 Atlantis. After opening against Middle Tennessee, they will play either Butler or Dayton in the second round.
UP NEXT
Coppin State: The Eagles stay on the road at play at Rider in New Jersey on Monday.
Virginia: Ventures away from home for the first time, facing Middle Tennessee in the Battle 4 Atlantis in The Bahamas.
___
More AP college basketball: https://apnews.com/Collegebasketball and http://www.twitter.com/AP_Top25