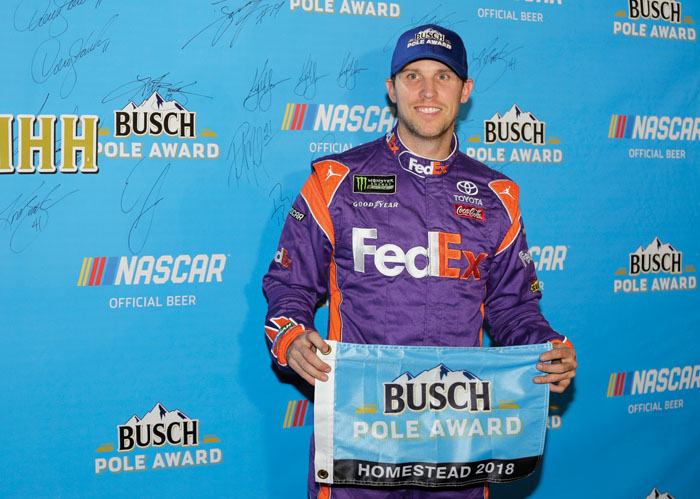 Denny Hamlin poses for a photo after winning the pole position during qualifying for the NASCAR Cup Series auto race at the Homestead-Miami Speedway, Friday, Nov. 16, 2018, in Homestead, Fla. (AP Photo/Terry Renna)

By JENNA FRYER, AP Auto Racing Writer
HOMESTEAD, Fla. (AP) — Kyle Busch thought he got the jump on the competition with a pole-winning run at Homestead-Miami Speedway. Then he was bumped by teammate Denny Hamlin and the politics began.
Hamlin gets the first pick of pit stalls for winning the pole, but Busch wants that spot. Busch is one of four drivers racing Sunday for the championship and Hamlin is not one of them.
“It’s a discussion,” Hamlin said about the strategy the Joe Gibbs Racing camp will use. “I mean, my pit crew is a second slower than Kyle’s. Everything is earned, nothing is given. We’ll have the discussion.”
Reigning series champion Martin Truex Jr. was in a similar position last year and asked Hamlin, a fellow Toyota driver, to give him the first pit stall but Hamlin declined. Busch didn’t think his luck would be any better.
“That’s probably too far, but it would sure be nice,” Busch said.
Hamlin turned a lap at 173.863 mph in the closing seconds of Friday qualifying to bump Busch from the top starting spot. Busch thought his lap at 173.622 was enough for the pole, but it only put him ahead of the other three title contenders.
Truex qualified third to put three Toyotas at the front of the field. It’s his final race with Furniture Row Racing because a loss of sponsorship is forcing the team to close following the finale.
Joey Logano qualified fifth for Team Penske. Kevin Harvick was 12th, lowest of the title contenders, but not overly concerned about where he’s starting.
“I mean, we qualified 12th, not last,” Harvick said. “I think it’s not that big a deal if we can get our car driving right for Sunday.”
Logano also cautioned against making predictions off of the qualifying results.
“I don’t think a whole bunch transfers over. I think everyone was just tuned in for one (qualifying) lap,” Logano said.
Hamlin, meanwhile, won the pole for the second consecutive year and in a meaningful race for his team. He announced earlier Friday that he and crew chief Mike Wheeler are parting ways at the end of this season and Hamlin seemed emotional about the split.
He and Wheeler won their very first race together, the Daytona 500 in 2016, and Hamlin wants to bookend their time together with a victory in their finale. A win would also extend Hamlin’s streak of winning at least one race every season since his 2006 debut.
Hamlin had to win at Homestead in 2013 to keep his streak active.
“We definitely want to end on a high note and try to win, in 2013 we were in the same predicament where we hadn’t won a race until the final race and we got it done, so hopefully it’s our time to do it,” Hamlin said. “We’re going to keep digging. Hats off to this team.”
___
More AP auto racing: https://apnews.com/apf-AutoRacing and https://twitter.com/AP_Sports